J-Lab : The Institute for Interactive Journalism 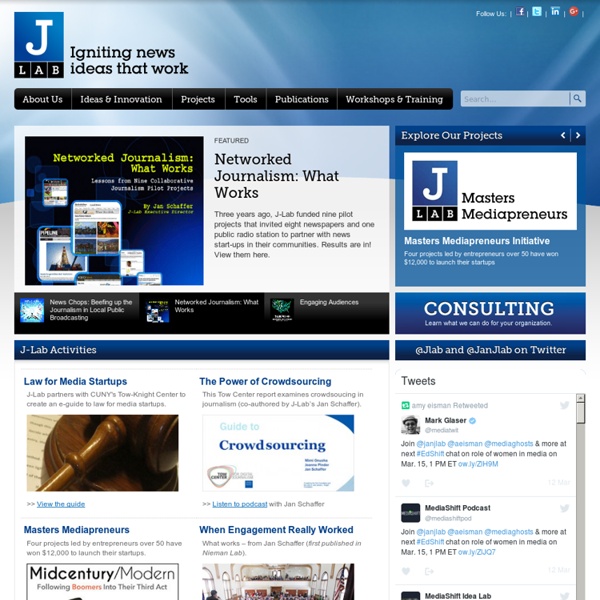 Networked Journalism: What Works Three years ago, J-Lab funded nine pilot projects that invited eight newspapers and one public radio station to partner with news start-ups in their communities. Results are in! View them here. Engaging Audiences Most online news startups say they cannot lasso data to track whether they are turning users into supporters who will help their sites survive.

Sarah Granger: Trump Autographed Copy Of Obama Birth Certificate For Auction Online Katie Jacobs Stanton didn't get a job at the White House by being shy. So when the opportunity to meet Donald Trump at Saturday's annual White House Correspondents Dinner came up, she hatched a plan: to find him and get his autograph on a copy of President Obama's long form birth certificate. Stanton, who now works at Twitter, tweeted her plans.

Innovation in journalism and the evolving paradigm : Sarah Granger : City Brights I’ve spent a lot of time thinking and speaking about innovation – in government, politics, policy and media. While innovation may be commonplace in the San Francisco Bay Area, where entrepreneurship is the top keyword on LinkedIn profiles and creativity is generally rewarded, innovators often get pushed out of more traditional organizations. I’ve alluded to this in the past in terms of how difficult it’s been for some older newspapers and magazines to shift to new media models, but innovation goes far beyond just moving with the times. Today through Wednesday, Stanford University is hosting their eighth annual Innovation Journalism conference – IJ-8 – dissecting some of the biggest issues involving media today, from channels to influence, earned media to mobile development.

change As a supporter of the Women's Media Center, I was saddened to hear MSNBC host Ed Schultz's misogynist comment about extreme right-wing radio host Laura Ingraham. While Ingraham's views are also detrimental to women, she provides enough fodder for progressive criticism that such base attacks, such as Shultz's have no place in news coverage or commentary. Unfortunately, several other of MSNBC's...

s Comprehensive WikiLeaks Timeline (UPDATED) As we mentioned before, "Wikileaks was not a story, but an ongoing continuum of stories... It's a story that is destined to keep on giving." In that short time since that post, it has indeed done just that. WikiLeaks -- its actions and the reactions to them, the implications of what has happened around the whistle-blowing site -- has given birth to an extremely complex and ever-changing situation. Blogging Seems To Have Peaked, Says Pew Report The Pew Internet and American Life Project released its latest report today documenting how different generations use the Internet, and most of the findings won't come as a surprise. Across generations and almost across the board, we're spending more time engaged in online activities, as watching videos, listening to music, and reading the news, for example, become inceasingly popular. The one notable exception: a decline in blogging among teens, with only half as many blogging today as did in 2006. Blogging also declined slightly among adults aged 18-33.

s Women’s Leadership Conference 2011 EWIP’s Fifth-Annual Leadership Conference Connect with the women transforming media and technology on March 6 at the Fifth-Annual Women’s Leadership Conference in San Francisco. The 2013 Exceptional Women in Publishing (EWIP) event marks our fifth year of bringing you our signature all-female roster, and our fifteenth year as an organization. Expect a day brimming with insight and intelligence. China bloggers’ meeting cancelled after government pressure 22 November '10, 07:13am Follow An annual bloggers’ meeting in China has been cancelled for the first time in its six year history as a result of pressure from the Shanghai Government.

How Digital Detectives Deciphered Stuxnet, the Most Menacing Malware in History It was January 2010, and investigators with the International Atomic Energy Agency had just completed an inspection at the uranium enrichment plant outside Natanz in central Iran, when they realized that something was off within the cascade rooms where thousands of centrifuges were enriching uranium. Natanz technicians in white lab coats, gloves and blue booties were scurrying in and out of the “clean” cascade rooms, hauling out unwieldy centrifuges one by one, each sheathed in shiny silver cylindrical casings. Any time workers at the plant decommissioned damaged or otherwise unusable centrifuges, they were required to line them up for IAEA inspection to verify that no radioactive material was being smuggled out in the devices before they were removed. The technicians had been doing so now for more than a month. "We were not immune to the fact that there was a bigger geopolitical picture going on.

Rachel Maddow Enters Facebook Contest To Interview George W. Bush It may not come as a shock that, despite repeated efforts, Rachel Maddow has not been able to secure an interview with former president George W. Bush. Now, Maddow is trying to win an interview with Bush by entering a contest that he is running on Facebook in support of his upcoming memoir, "Decision Points."