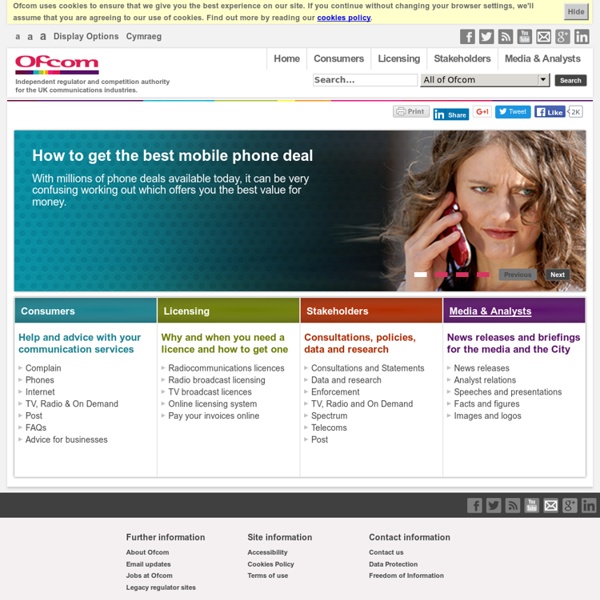 Defamation Act 2013 - What is serious harm? Yesterday the High Court handed down its first judgment addressing the question of what amounts to "serious harm" in the context of the Defamation Act 2013 (the "Act"). The Court has confirmed that the "serious harm" hurdle that must now be overcome is high. Summary Since 1 January 2014, a statement will not be defamatory unless its publication has caused or is likely to cause serious harm to the reputation of the claimant. SMS Text Messages - UK Information and Advice This page contains links and information regarding SMS text messaging in the UK What is SMS? SMS stands for Short Message Service, but is more commonly known as "texting". publications du Clemi Le 9 avril : vous avez rendez-vous avec Vous travaillez autour de projets d’éducation aux médias ? Vous accompagnez vos élèves dans un projet de webradio ? Vous voulez aborder la création sonore avec votre classe ?

Case Law: Thompson v James – blogger loses libel claim against Council – Gervase de Wilde There may be no typical cases in this area of the law, but Thompson v James epitomised the controversy which can surround libel litigation. The protracted and bitter nature of the dispute, the Claimant’s focus on local government transparency, and the issue of access to Council proceedings all made the action a subject of concern to a range of vociferous interest groups in the print media and online. The case was even the subject of a Times editorial on the final day of the trial. The 423 paragraph judgment, handed down by Mr Justice Tugendhat at the High Court in London on Friday 15 March (Thompson v James & Anor ([2013] EWHC 515 (QB)), found for Mr James and Carmarthenshire Council on both the claim and the counterclaim, and also provided significant context for the coverage.

LG Cookie KP500 disassembly If you want to buy a replacement screen, screwdrivers and other parts, you can order from us here: LG Cookie KP500 screen Tools required for disassembly: Phillips screwdriver, plastic tool such as a guitar plectrum or credit card. Remove your back cover, battery, sim, memory card and stylus. Four screws need to be removed (circled). Run something like a credit card around the join of the back cover to release it from the rest of the phone. With the back cover removed your phone should look like below. Blogs, online publications and defamation A local authority officer recently succeeded in a counter-claim for libel. Wesley O'Brien and Jonathan Moore look at the lessons to be learned. The recent High Court decision in Thompson v James and Carmarthenshire CC [2013] EWHC 515 (QB) considers an authority’s robust response to public criticism and accusations of corruption, and the circumstances in which a local authority employee can sue and succeed in a defamation claim. Background The dispute between Mrs Thompson and the council was triggered by the council’s rejection of various planning applications submitted by Mrs Thompson and her family between 2004 and 2006. The dispute escalated in 2006 when Mrs Thompson accused the council and its officers of corruption.

Free Software Download The creator of this page or the ISP(s) hosting any content on this site take no responsibility for the way you use the information provided on this site. These files and anything else on this site are here for private purposes only and should not be downloaded or viewed whatsoever! If you are affiliated with any government, or ANTI-Piracy group or any other related group or were formally a worker of one you cannot enter this web site, cannot access any of its files and you cannot view any of the HTML files. All the objects on this site are private property and are not meant for viewing or any other purposes other then bandwidth space. Do not enter whatsoever!

Blogger Jacqui Thompson loses £25k libel award appeal A blogger who was arrested for filming a council's meeting has lost her appeal against being told to pay its chief executive £25,000 in libel damages. Jacqui Thompson, from Llanwrda, Carmarthenshire, was sued by Mark James over five posts she made on her blog. Mrs Thompson also faces a £230,000 legal bill after losing a bid to sue Mr James for libel. Mr James said he was pleased that the Appeal Court had "dismissed completely" Mrs Thompson's case.

LG KF700 Broken LCD Display Screen Replacement Is the LCD screen on your LG Kf700 broken? How to replace the screen on a KF700? Is the screen on you KF700 from LG cracked or damaged and you want to repair it? Then this video below will show you how. About social enterprise / About Have you ever bought the Big Issue? Read it over a bar of Divine chocolate? Watched Jamie Oliver’s Fifteen? Visited the Eden Project?

Local News in a Digital Age Whether in a tech-savvy metropolis or a city where the town square is still the communication hub, local news matters deeply to the lives of residents. Across three disparate metro areas in the U.S., nearly nine-in-ten residents follow local news closely—and about half do so very closely, according to a new, in-depth Pew Research Center study, conducted in association with the John S. and James L. Knight Foundation.