European Federation of Agencies and Regions for Energy and the Environment 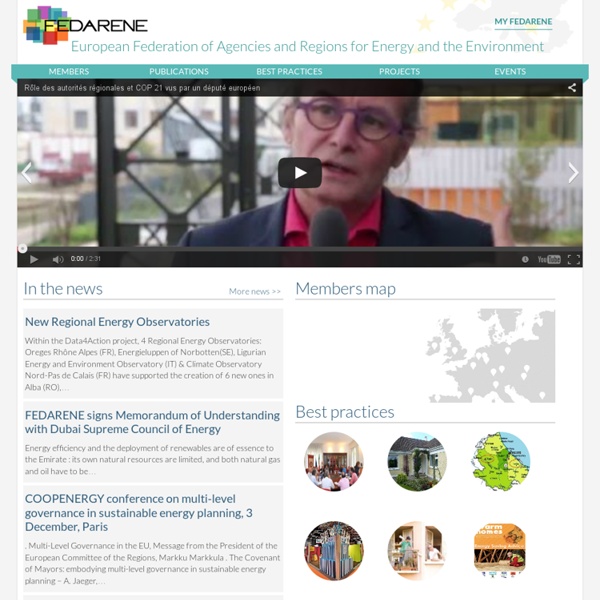 European Alliance to Save Energy - Creating an energy efficient europe European Alliance to Save Energy Almere Almere (Dutch pronunciation: [ɑlˈmeːrə]) is a planned city and municipality in the province of Flevoland, the Netherlands, bordering Lelystad and Zeewolde. The municipality of Almere comprises the districts Almere Stad, Almere Buiten, Almere Oosterwold (design phase) and Almere Pampus (planned for future). and the boroughs of Almere Haven, Almere Hout and Almere Poort. Almere is the newest city in the Netherlands: the land on which Almere sits, the Southern Flevoland Polder, was reclaimed from the IJsselmeer in 1959-68. The first house was finished in 1976, and Almere became a municipality in 1984. It is the largest municipality in Flevoland with 196,290 citizens in 2014 and the 7th largest in the Netherlands.[5] In October 2007, the city council of Almere made agreements with the government to expand the city to 350,000 inhabitants by 2030.[6] History[edit] Governance[edit] Local executive[edit] Franc Weerwind (D66) has been the mayor of Almere since 9 September 2015. List of mayors:

Covenant of Mayors - News The EU-funded STRATEGO project recently published the Pan-European Thermal Atlas (PETA), an interactive map that shows data on the thermal resources available in any region as well as EU-wide thermal demand. PETA maps heat and cooling demand, the local density of both demands, available waste heat resources and the potential for renewable energy sources. Using the information provided by STRATEGO, national governments will be able to implement National Cooling and Heating Plans (NCHPs)* more efficiently. Using the PETA results, maps of five EU member states have been created to support their governments in improving the efficiency of their energy systems. The maps show demand for heating and cooling in urban areas in Croatia, the Czech Republic, Italy, Romania, and the United Kingdom, which vary greatly in population, climate, resources, and energy supply. *NCHPs are required under Article 14 of the European Commission’s Energy Efficiency Directive. More information

BIOMASSE euesco.org Home Volker Dragon Chairman Andrei Litiu Director Governmental Relations Every public as well as private organisation have one primary goal: bring the best services, products or solutions to market at competitive or at least affordable prices. For staying competitive in the international marketplace, public undertakings and private sector companies must cut costs while continuing to operate more efficient and sustainable than ever before. Energy efficiency of buildings constitutes a brilliant opportunity to simultaneously contribute to all these objectives and Energy Performance Contracting (EPC) is the “royal road” to lever the necessary investments out of funds with guaranteed savings from reducing energy consumption. The eu.ESCO members are willing and ready to provide industry-leading EPC for leveraging building performance and energy efficiency by identifying energy conservation measures and implementing staged deep energy retrofits without utilizing capital funding. News & Press 02. 02.

Cefic | European Chemical Industry Council Energy Efficiency is Connected: | Energy Efficiency in Industrial Processes PRO'MOBILITÉ EU research shows need for action now on climate change Forecast models on the effects of climate change on society and the environment are complex and can yield different results. EU-funded researchers have analysed these scenarios and found overwhelming evidence that taking action sooner rather than later reduces the costs of mitigation. Their research aims to help policymakers make informed decisions to mitigate climate change. Energy-economy model assessments can inform policy discussions with insights into the costs of decisive climate change mitigation as well as the costs of delaying action. The EU-funded AMPERE project, which ended in January 2014, studied a diverse range of scenarios and was able to demonstrate that taking action sooner rather than later will reduce the costs of climate change mitigation. Mitigation actions are designed to limit the magnitude of long-term climate change, and generally involve reductions in emissions of greenhouse gases. The way to a low-carbon economy

EU CLG University of Cambridge Programme for Sustainability Leadership The Prince of Wales’s Corporate Leaders Group on Climate Change (CLG) brings together business leaders from major UK, EU, and international companies who believe that there is an urgent need to develop new and longer term policies for tackling climate change. The Corporate Leaders Group engages in policy through open letters, roundtables, international summits, communiqués and participating in projects to demonstrate what is possible. The groups are cross-sector, encompassing energy producers, manufacturers, banks, retailers, utilities and others. The EU CLG was convened by The Prince of Wales in 2007, bringing together business leaders from a cross-section of EU and international businesses who believe there is an urgent need to develop new and longer-term policies for tackling climate change.