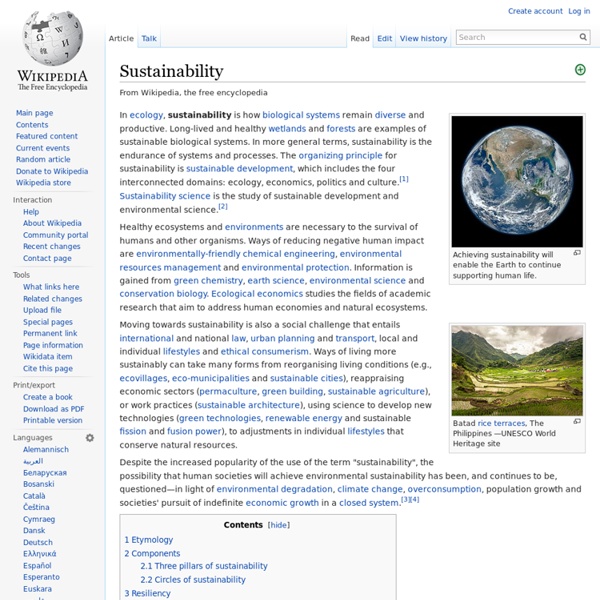 The Limits to Growth Five variables were examined in the original model. These variables are: world population, industrialization, pollution, food production and resource depletion. The authors intended to explore the possibility of a sustainable feedback pattern that would be achieved by altering growth trends among the five variables under three scenarios. They noted that their projections for the values of the variables in each scenario were predictions "only in the most limited sense of the word," and were only indications of the system's behavioral tendencies.[4] Two of the scenarios saw "overshoot and collapse" of the global system by the mid to latter part of the 21st century, while a third scenario resulted in a "stabilized world

Sustainable city A sustainable city, or eco-city is a city designed with consideration of environmental impact, inhabited by people dedicated to minimization of required inputs of energy, water and food, and waste output of heat, air pollution - CO2, methane, and water pollution. Richard Register first coined the term "ecocity" in his 1987 book, Ecocity Berkeley: Building Cities for a Healthy Future.[1] Other leading figures who envisioned the sustainable city are architect Paul F Downton, who later founded the company Ecopolis Pty Ltd, and authors Timothy Beatley and Steffen Lehmann,[2] who have written extensively on the subject. The field of industrial ecology is sometimes used in planning these cities. There remains no completely agreed upon definition for what a sustainable city should be or completely agreed upon paradigm for what components should be included. It is estimated that over 50%[4] of the world’s population now lives in cities and urban areas.

The Universal Principles of Sustainable Development By Terry Mock and Tony Wernke, SLDI Co-founders Follow Terry and Tony on Twitter: Terry @SustainLandDev; Tony @Sustainable4U This article is Part 3 in the Fractal Sustainable Development Trilogy. Part 1: Designing a ‘Big Wheel’ for Civilization Environmental impact of paper A pulp and paper mill in New Brunswick, Canada. Although pulp and paper manufacturing requires large amounts of energy, a portion of it comes from burning wood residue. The environmental impact of paper is significant, which has led to changes in industry and behaviour at both business and personal levels. With the use of modern technology such as the printing press and the highly mechanised harvesting of wood, disposable paper has become a cheap commodity. This has led to a high level of consumption and waste. With the rise in environmental awareness due to the lobbying by environmental organizations and with increased government regulation there is now a trend towards sustainability in the pulp and paper industry.

Over-consumption CO2 emission per capita per year per country pre-2006 The theory was coined to augment the discussion of overpopulation, which reflects issues of carrying capacity without taking into account per capita consumption, by which developing nations are evaluated to consume more than their land can support. Green parties and the ecology movement often argue that consumption per person, or ecological footprint, is typically lower in poor than in rich nations. Causes[edit] Planned obsolescence[edit]

#39 - Population and Community Development Association Check out if Population and Community Development Association is in The Top 100 NGOs 2013 Edition! Social marketing to address sexual health.37 years of sustained impact. In 1974, economist Mechai Viravaidya launched an initiative to improve family planning in Thailand, stirred by the adverse effects of high population growth on the rural poor. …7 POINTS AGENDA ON GREEN ECONOMY FOR SUSTAINABLE DEVELOPMENT Nigeria has been largely unfortunate not to have good and progressive political leaders, and this has resulted in perpetuating Nigeria in poverty and underdevelopment despite her huge GREEN ECONOMY. This persistent failure of the Nigeria System has produced a large army of bitter critics, who consistently point out the ills in the Governance of Nigeria and potter alternative ways of doing it better. Toward the Sustainable Development Conference [RIO+20] in Brazil. My 7 point agenda on green economy for sustainable development which I recommend for the President to look into will be: 1.

Paper recycling Waste paper collected for recycling in Italy Paper recycling is the process of turning waste paper into new paper products. There are three categories of paper that can be used as feedstocks for making recycled paper: mill broke, pre-consumer waste, and post-consumer waste.[1] Mill broke is paper trimmings and other paper scrap from the manufacture of paper, and is recycled internally in a paper mill. Pre-consumer waste is material which left the paper mill but was discarded before it was ready for consumer use.