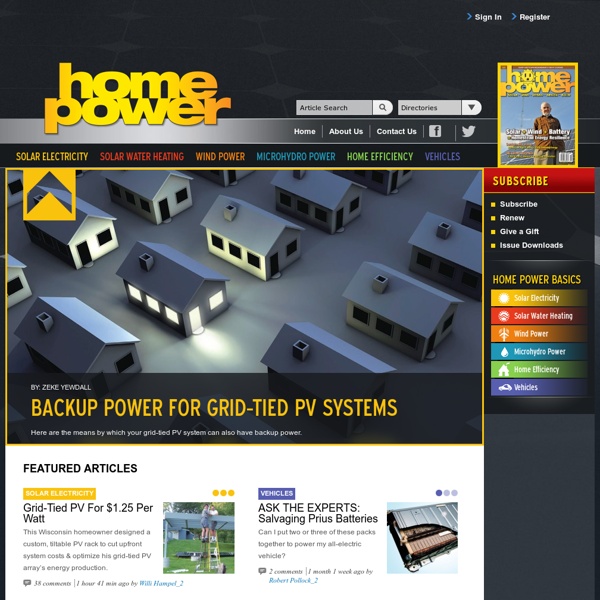 Visitor 1 Feedback always welcomed... Please keep gotwind informed of your hard work, it helps us all. You can send pictures and ideas either by email or via theforum Scotland's Peter Davie emailed: I built one of these dynohub generators. This has withstood winds in excess of 70MPH perhaps even more. I have never serviced it at all, Mother Earth: Waste Oil Heater You say the skyrocketing cost of oil, electricity, coal, and other fuels has you scratching for a less expensive way to heat your shop, garage, or home this coming winter?Well scratch no further! Because MOTHER is here to tell you about a dandy little furnace that her researchers have developed -- which costs next to nothing to build and is even less expensive to operate (since it burns the used motor oil that tens of thousands of service stations across the country will still give away free to anyone who'll haul it off). It's Cheap, Clean, and Environmentally Sound! Yep.

50 Tools Man is "weak in himself, and of small stature," wrote 19th-century essayist Thomas Carlyle. Yet, with tools, "the granite mountain melts into light dust before him, seas are his smooth highway, winds and fire his un­wearying steeds." And this from a guy who never felt a 5800-rpm circular saw scream to life in his hand. While much has changed since Carlyle's day, one thing hasn't: We need tools to build, repair and maintain the mechanical world in which we live. With these 50 tools, you'll be ready for just about any project--whether it's melting mountains or swapping out the kitchen sink. 1.

Do-It-Yourself (DIY) Wind Turbine 4 Foot Wind Turbine - option for 6 Foot Sweep There are 2 parts to this project: Building the Wind Turbine There are several DIY wind turbine science projects on the internet. Field Kitchen K120 Series Price: $595.00 Field Kitchen K120 Series (Vacant) Box only, stove and optional accessory purchase separately. Household Cleaning Tips from WomansDay.com - How to Clean House A few years ago, I found out that I’ve been cleaning all wrong. I was in a hotel room, when a maid came in and sprayed a solution on every surface…and then left. Right when I thought she’d forgotten, she returned. She wiped for less than two minutes with a thin dry cloth, and the whole place sparkled. It had, frankly, never occurred to me to let one solution do all the work, so I asked her what she’d used.

Scientists Make Lithium-Air Batteries That Hold Their Breath When Tesla Motors revealed its plan to buy solar panel maker SolarCity, the thread tying them together was battery storage. The idea, according to chief executive Elon Musk, is to combine solar panels with Tesla’s stationary Powerwall batteries. On cloudy days or in the evening, the stored energy could run your dishwasher or charge your Tesla Model S sedan. For the batteries inside its cars and Powerwall systems, Tesla is betting on the same lithium-ion chemistry used in smartphones and hover-boards.

How to Design a Man's Closet" A man's wardrobe consists, for the most part, of suits, shirts, ties, jackets, sweaters, and casual wear. You won't find the wide variety of items or lengths that are common in a woman's wardrobe. Although many feminine equivalents to a man's clothes do exist, the issue of importance is a matter of space rather than classification.