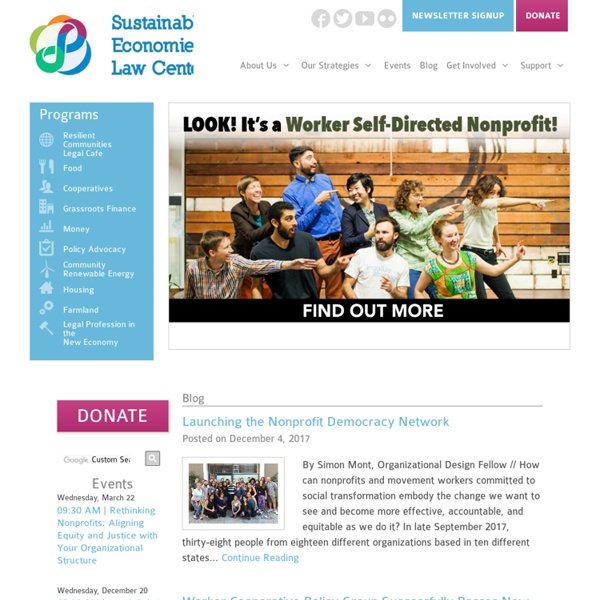 It's SELC's Spring Membership Campaign! Help us legalize sharing and grow the movement for more just and resilient economies - join our Community TODAY by becoming a SELC Community Member! Help Us Reach Our Goal: 224 New Community Members Why are we inviting 224 new members? That's how many clients SELC has provided legal advice to at the Resilient Communities Legal Cafe in just over a year! SELC is a people-powered organization - we need the support of people like you to turn our campaigns into new laws, and to sustain our capacity to create change.

In The Netherlands Sex Education Starts In Kindergarten: Here’s What They Tell Them & Why “People often think we are starting right away to talk about sexual intercourse [with kindergartners]. Sexuality is so much more than that. It’s also about self image, developing your own identity, gender roles, and it’s about learning to express yourself, your wishes and your boundaries.” – Ineke van der Vlugt, an expert on youth sexual development for Rutgers WPF, the Dutch sexuality research institute and the organization behind Netherlands sex education curriculum. Did you know that the Netherlands has one of the lowest teen pregnancy rates in the world? Did you know that the majority of teens in the Netherlands say their first sexual experiences were “wanted” and “fun?” It could be because by law, all primary school students in the Netherlands must receive some form of “sexuality education.”

Building a More Effective Core Team Date: Wednesday, April 8, 2015 - 11:00am - 12:15pm Join Chris Corrigan, Art of Hosting trainer and facilitator extraordinaire, for an important conversation around the art of Working With Core Teams. How do we build structures to steward engagement and create spaces for strategic and inclusive work without the "tyranny of inclusion" stopping us from moving? You will learn about principles and structures for planning inviting and working with core teams who oversee and host larger engagement projects.

These Neighbors Got Together to Buy Vacant Buildings. Now They’re Renting to Bakers and Brewers by Olivia LaVecchia This article was produced by the Institute for Local Self-Reliance, as part of its Community-Scaled Economy Initiative, which produces research and partners with a range of allies to implement public policies that curb economic consolidation and strengthen locally owned enterprise. The intersection of Central and Lowry Avenues in northeast Minneapolis is bustling. On the northwest corner is a trifecta of local businesses: A bike shop, a cooperative brewery, and a bakery, in buildings with eye-catching exteriors of rough-hewn wood and silvery porcelain bricks.

This Sliding Scale Café Takes Food Access to the Next Level SAME Café co-owner Libby Birky says it isn’t uncommon for people to stand confused at the front entrance of this Denver, Colorado, lunch spot, trying to understand exactly how to order a meal. What looks like a casual restaurant is actually a community café—a new, but increasingly popular, business model using a “pay-what-you-wish” approach. Customers walk in, place their order, and sit down with their food. Most diners do pay for their meals—about 75 percent pay something—but none are handed a bill. SAME, an acronym for So All May Eat, is a donation-based restaurant—the only non-profit restaurant in Denver. Customers pay what they can for their meal, work off their bill (one hour of volunteer work = one lunch), or eat for free, with the assumption that they will give what they can next time.

10 Steps to a Healthier Community through Social Marketing Community-based social marketing (CBSM) encourages individuals to make life changes that are good for them and their community. Rather than trying to get people to buy cereal or a car, social marketers encourage them to do things like share more, reduce food waste, or stop smoking. Recently, the West Coast Climate and Materials Management Forum hosted a webinar on social marketing featuring Amanda Godwin from Colehour + Cohen who explained how to implement CBSM techniques to achieve lasting behavior change within communities. Owning is the New Sharing Image from OpenSource.com's post, "Don't Build a Better Mousetrap. Change the Business Model." One chilly morning last winter, I reconnected with an old friend, Joel Dietz, on a video chat. We hadn’t seen each other for years, and we’d each had several starts and stops in our lives since. He began telling me about his latest undertaking, Evergreen, a digital currency system that he described as “organic” and “without additives.”

An Open Letter to Transition Towns Why It Matters Transition Towns can more easily fulfill their mission of building resilient communities by understanding specific economic principles. Image Credit we're bringin' farming back What does is take to be a game changer in the 21st century? We set out on a mission to find out. All of these people possess the same qualities. While you may or may not agree with them, you can't deny that they all push every single day to change the status quo. They have changed both the conversation around food and the way with which we do it. Beyond the CSA: Four Ways Communities Support Everything From Books to Beer by Dana Drugmand You know the model: Consumers purchase a share of the season’s harvest upfront and get a box of fresh produce each week from the farm. Now you can get your medicine that way too. posted Sep 05, 2014 Since the first community supported agriculture program was established in western Massachusetts in the 1980s, the concept of buying food directly from local farms has taken off.

Today's Read: Study Provides Further Evidence for Supportive Housing Model - Coalition For The Homeless We’ve known for decades that supportive housing – pairing on-site services with the stability of a permanent home – is one of the most powerful tools in ending homelessness for people with mental illness and other special needs. A study recently published in PLOS ONE underscores the effectiveness of providing homeless people with both housing and supportive services. Over the course of two years, researchers monitored 378 homeless adults with mental illness who were given either housing with intensive case management or treatment as usual. According to lead researcher Vicky Stergiopoulos, PhD, of St. Michael’s Hospital in Toronto:

Booting Corporate Power, Communities Are Taking Back Control of Their Water In communities across the world, people are taking back their water. Cases of remunicipalization—getting what were privatized water and sanitation services back under public control—is the focus of a new book by the Netherlands-based Transnational Institute (TNI), and offers welcome respite from tales of the ever-encroaching reach of corporate power. The trend of remunicipalization is accelerating, the new research says, and it's "a story crying to be told." "This report," stated lead editor Satoko Kishimoto of TNI, "shows that water privatization, which has been promoted so heavily in recent years, is increasingly being rejected by cities worldwide after years of failed promises, poor services, and high prices."

The Control of Seed and Seed Sovereignty Rye Ramble (from the 2015 Adaptive Seeds Catalog) The Control of Seed and Seed Sovereignty At Adaptive Seeds, we talk about our work of Bringing Biodiversity Back. Part of that, of course, is growing and stewarding seed and providing you with good seed stock for your own seed saving efforts. But seed work isn’t only done in the field, and preserving seed sovereignty and freedom takes more than just saving seeds.

Food Bikes - Sustainable Economies Law Center What’s a food bike you ask? It’s a low-footprint, low-capital alternative to a food truck. If you’ve ever traveled around Asia or Latin America, you know that most “street food” is peddled by cart or bicycle as opposed to food trucks. Guru Ram Das Ashram Guru Amar Das, the third Sikh Guru, institutionalized the concept of Langar inspired by the teachings of Guru Nanak. He taught that all are equal in the eyes of God. He asked all those wishing to see him, regardless of caste, to first sit together and eat a humble vegetarian meal. This was a revolutionary concept in 16th Century India, a country bound by the caste system for many hundreds of years.