The Urban Homestead® - A City Farm, Sustainable Living & Resource Center, A Path to Freedom towards Self-Sufficiency 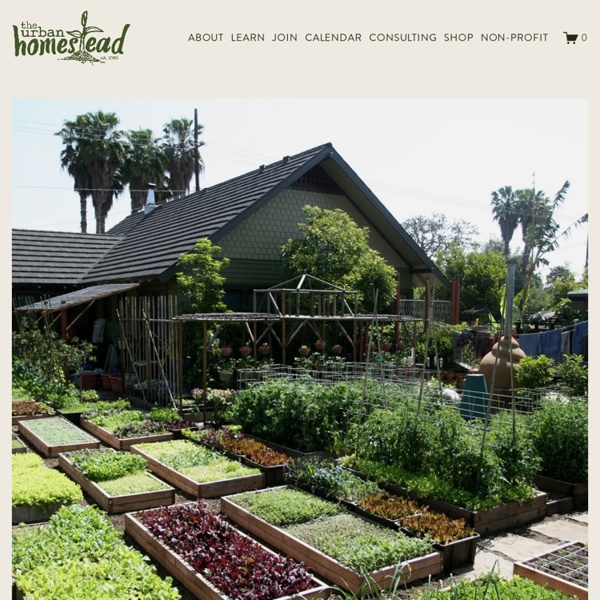 Surrounded by urban sprawl and just a short distance from a freeway, the Urban Homestead project is a family operated and highly productive city farm. It is also a successful, real-life working model for sustainable agriculture and eco living in urban areas and has been featured in multiple news medias both nationally and internationally. Our work in creating Urban Homesteading as a flourishing and self-sufficient lifestyle using minimum resources and land has been referenced as a progressive and forward-thinking example and sourced as the representation of future city planning and reclamation worldwide. For over a decade, we have proved that growing ones' own food can be sustainable, practical, successful and beautiful in urban areas. We harvest 3 tons of organic food annually from our 1/10 acre garden while incorporating many back-to-basics practices, solar energy and biodiesel in order to reduce our footprint on the earth’s resources.

Notes from the Psychedelic Salon » Quotes, comments, and audio files from Lorenzo's podcasts Guest speaker: Terence McKennaListen Download Subscribe MP3 Free PCs – Right click, select option Macs – Ctrl-Click, select option Terence McKenna [NOTE: All quotations are by Terence McKenna.] Assess the U.S. Climate Scientific assessments are essential tools for linking science and decision making. They survey and synthesize science, within and between disciplines and across sectors and regions. They highlight key knowledge that can improve policy choices and identify significant gaps that can limit effective decision making. Assessments also track progress by identifying changes in the condition of the Earth, changes in human response, and advances in science over time. Assessments have been integral components of USGCRP since our inception. We have a legal mandate to conduct a National Climate Assessment (NCA) every four years, the third and most recent of which was released in May 2014.

Acacia Acacia (/əˈkeɪʃə/ or /əˈkeɪsiə/), known commonly as acacia, thorntree, whistling thorn, or wattle, is a genus of shrubs and trees belonging to the subfamily Mimosoideae of the family Fabaceae, described by the Swedish botanist Carl Linnaeus in 1773 based on the African species Acacia nilotica. Many non-Australian species tend to be thorny, whereas the majority of Australian acacias are not. All species are pod-bearing, with sap and leaves often bearing large amounts of tannins and condensed tannins that historically found use as pharmaceuticals and preservatives. The generic name derives from ἀκακία (akakia), the name given by early Greek botanist-physician Pedanius Dioscorides (middle to late first century) to the medicinal tree A. nilotica in his book Materia Medica.[2] This name derives from the Greek word for its characteristic thorns, ἀκίς (akis; "thorn").[3] The species name nilotica was given by Linnaeus from this tree's best-known range along the Nile river. Classification[edit]

5 tips to reduce your exposure to BPA and other hormone disrupting chemicals in your diet Adults and children can reduce their exposure to hormone-disrupting chemicals, including bisphenol-A (BPA), by eating more fruits and vegetables and less food from plastic containers and metal cans, according to a recent study. A group of 20 San Francisco residents had 66% less BPA in their urine after spending three days on a diet of fresh, organic and unpackaged food, scientists found. Their levels of another chemical, bis(2-ethylhexyl) phthalate or DEHP, fell 53% to 56%. “The is the first study to provide clear evidence that food packaging is a major source of BPA and DEHP exposure in children and adults,” says co-author Julia G. Brody, executive director of the Silent Spring Institute, a Massachusetts-based nonprofit that studies environmental factors in women’s health. BPA is so prevalent in food packaging and other consumer items that prior research has detected its presence in at least 90% of Americans.

RAWIllumination.net Page 13, "we're closer to the pet shop here," to Page 23, "rather close to the Weatherman faction." I'm using quotes as well as page numbers to make things easier for folks who may be using ebooks. -- The Mgt. This is the section in which Saul Goodman and Barney Muldoon begin examining the memos to Joseph Malik, editor of "Confrontation" magazine, giving background to the magazine's mysterious Illuminati project. Most of the references in the memos are quite straightforward, and even now, when interest in the Illuminati seems to be continuing, looking up the references in the memos is a good way to research the alleged secret society.

The Earth Institute - Columbia University Exploring Science in the Field from Pole to Pole Company Donates 330,000 Bed Nets to Help Fight Malaria in Africa Lords of the Past Hay vs. Straw – What’s The Difference? Hay and straw seem very similar on the surface, but they are actually quite different; each one ideal for its own thing. For example, hay is a feed, while straw is a byproduct, and although both can be used for bedding, straw is the better choice. It’s important to know these differences before working with straw and hay, so here’s a little help. Origin: – Straw is made from the leftover shafts of grains like rye, oats, and wheat, after the seed heads have been cut off. – Hay is often the combination of several grasses and grains like alfalfa, brome, and timothy; clover and rye are often components. Hay is cut when it’s source is still green, capturing nutrients in the cut-off plants.

Living In The Future - Episode 1: Introducing Lammas This video series is an exploration of community and sustainability. The ecoVillage addresses many of the difficulties facing the modern world - offering shared resources; reduced consumption and waste, as well as companionship and support. Today, there are ecoVillages in 70 countries across six continents. This site is a sharing of ideas, imagination, techniques and discoveries. Knowledge and civilization Aj Sak Teles, Late Classic Mayan Lord Last night, my friend David pointed out an interesting passage in in search of the miraculous, in which Gurdjieff tells Ouspensky a number of interesting things about the nature of knowledge. Gurdjieff, of course, drew a clear distinction between knowledge and understanding, but this particular passage makes it clear that he, like Ibn Arabi, thought knowledge to be an inestimably valuable substance: an essential factor in the culture of man. The very nearly anti-intellectual stance which one frequently encounters in the Gurdjieff work stands in stark contrast to the appreciation for the intellect which is actually needed in order to conduct any serious spiritual work.

Project on Climate Change Communication April 09 2014 | Research Reports New Commentary Urges Climate Scientists to “Set the Record Straight” We just published a commentary in Earth’s Future, a new online, open-access journal published by the American Geophysical Union. The commentary is entitled: “Climate Scientists Need to Set the Record Straight: There is a scientific consensus that human-caused climate change is happening.” Five Tips for Yardfarmers from The Market Gardener » Yardfarmers “Local agriculture does have the power to transform society, and I believe that ultimately it will.” – Jean-Martin Fortier Jean-Martin Fortier would be the first to tell you that the small family farm is not dead. Far from it. In an age when the “bigger is better” mentality has thoroughly pervaded the farming landscape, a small but growing group of farmers have bucked that trend, and have achieved remarkable success operating on a much smaller scale. It seems that small may just be the next big thing. The pond at Les Jardins de La Grelinette (from Jean-Martin Fortier)

The Intrinsic Taboo Domesticated Dogs, Domesticated Humans Our beloved domesticated dogs differ little genetically from their wild progenitor the Gray Wolf — so little in fact that they are considered the same species despite the significant morphological changes that we see in "man's best friend". Even with the strange mutations that the domestication process has imparted to dogs — traits like exaggerated ears, long curly hair, short legs, flattened snouts, and spotted coats — every dog you have every known is, scientifically speaking, a gray wolf. The Gray Wolf is known to science as Canis Lupus — a species of canid native to North America, Eurasia, and Northern Africa.

John Kohler has the number one YouTube garden channel (Growingyourgreens.com) Heavy Harvest Premium Compost Tea Bags Finally a durable, easy to clean, and well engineered compost tea brewing bag. The Heavy Harvest Tea Bags will allow you to achieve the healthiest biological production possible. With a simple closing system and multiple hanging points, these bags can be used in any type of compost brewer. Heavy Harvest Tea Bags come in two sizes: The Small bag will work in brewers from 3 gallon up to 15 Gallon.