Make your own biodiesel 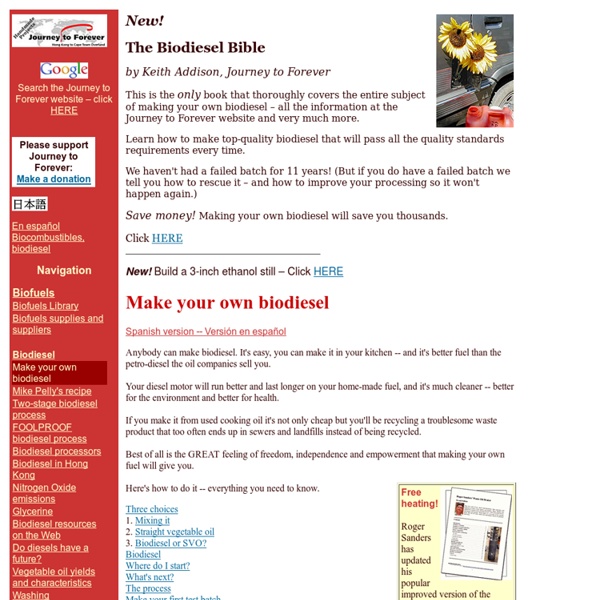 The first two methods sound easiest, but, as so often in life, it's not quite that simple. Vegetable oil is much more viscous (thicker) than either petro-diesel or biodiesel. The purpose of mixing or blending straight vegetable oil (SVO) with other fuels and solvents is to lower the viscosity to make it thinner, so that it flows more freely through the fuel system into the combustion chamber. If you're mixing SVO with petro-diesel you're still using fossil-fuel -- cleaner than most, but still not clean enough, many would say. People use various mixes, ranging from 10% SVO and 90% petro-diesel to 90% SVO and 10% petro-diesel. You might get away with it in summer time with something like an older '80s Mercedes 5-cylinder IDI diesel, which is a very tough and tolerant motor -- it won't like it but you probably won't wreck it. To do it properly and safely you'll need what amounts to a proper SVO system with at least fuel pre-heating. Mixes and blends are generally a poor compromise. 1. 2.

Biodiesel Bus run by biodiesel Space-filling model of methyl linoleate, or linoleic acid methyl ester, a common methyl ester produced from soybean or canola oil and methanol Space-filling model of ethyl stearate, or stearic acid ethyl ester, an ethyl ester produced from soybean or canola oil and ethanol Biodiesel refers to a vegetable oil- or animal fat-based diesel fuel consisting of long-chain alkyl (methyl, ethyl, or propyl) esters. Biodiesel is meant to be used in standard diesel engines and is thus distinct from the vegetable and waste oils used to fuel converted diesel engines. The National Biodiesel Board (USA) also has a technical definition of "biodiesel" as a mono-alkyl ester.[3] Blends[edit] Biodiesel sample Blends of biodiesel and conventional hydrocarbon-based diesel are products most commonly distributed for use in the retail diesel fuel marketplace. Applications[edit] Distribution[edit] Vehicular use and manufacturer acceptance[edit] Railway usage[edit] Aircraft use[edit] Rudolf Diesel

Test-batch mini-processor Spanish version -- Versión en español This mini-processor is easy to make from not very much, mostly kitchenware, along with an electric drill, some scrap iron and a few bits and pieces.It's effective and safe, closed and virtually air-tight, with no splashing or leaking of hot fumes, and it has full temperature control.It makes one- or two-litre batches, for tests or for demonstrations. It's suitable for the single-stage and two-stage processes. And you can take it anywhere.It's the ideal processor for beginners. Unlike kitchen blenders, it closely mimics the processing action of full-scale reactors in miniature -- it's much easier to scale up when you're ready for full-sized batches. Cut a square hole in the lid the exact size and shape of the bush; cut another hole in the lid insert.

Home Distillation Distillation Legal issues Home distillation of spirits is illegal in many countries including Australia. Therefore unless you are in New Zealand consult with your local legislation before you use the information provided in this section. Fermentation Fermentation occurs when sugar is converted to ethanol (alcohol) by yeast. Distillation A distillation device called a still is used to separate the alcohol from the water in the fermented mixture. Filtration In this step the distilled spirit is run through a filter to get rid of any unwanted impurities and smells. Achieving the desired alcohol strength The alcohol level of the distilled and filtered spirit could be as high as 95%, which is poisonous. What's your flavour ? Your spirit is now ready to be used in creating the drink of your choice. Detailed to tutorial on home distillation of spirits Things to do; Sterilise all equipment before use. Things you will need; 30 litre Fermenter fitted with airlock and tap. Fermentation. Filtering your alcohol.

Building a World Class Home Distillation Apparatus Biodízel mikroalgaolajból Technológiák » Zöld autó » Biodízel Biodízel mikroalgaolajból forrás: mernokbazis.hu Megjelenés: 2012.02.22., 13:20 Utolsó módosítás: 2012.02.22., 12:40 A fosszilis nyersanyagok korlátozott mennyiségben állnak rendelkezésre, a járművekben való elégetésük pedig növeli a CO2-terhelést. Kapcsolódó cikkek: A növényi olajok, például szójababból vagy repcéből, a bioüzemanyagok ígéretes alapanyagai, írja a mernokbazis.hu. A mikroalgákból nyert olaj finomítása mindeddig azonban különböző nehézségekkel járt. A reakció elemzése azt mutatta ki, hogy egy kaszkádreakció ment végbe. Home Distillation of Alcohol (Homemade Alcohol to Drink) To make a grain wort requires Malting, Gristing, Mashing, Brewing, and Fermenting. Check beer related books, homepages or discussion groups (eg Alan & Melissa's Homebrew, Spensers Beer page), for heaps more details, but don't get put off by some the minutia they sometimes get into. See also ... Avoiding Post-Fermentation ProblemsHow the Mash Makes WortBoiling and HopsBodensatz Brewing Only use grains if you are after flavour (eg making a bourbon or whisky), or if for some reason they are really cheap for you to obtain. An excellent way to remove the grains after fermentation is to have used a "grain bag" - eg a large bag made of mesh or muslin to hold the grains. Big tip ! The differences between Scotch whisky, Irish and American whiskeys is outlined at 'The Macallan' site: Scotch whisky It is now generally agreed that there are six regions and these are based on taste as well as geographical location.

EV WORLD: The Life Cycle of Liquid Fuels Algae-filled tubes in German bioreactor produce a biodiesel fuel. Analysis by Dr. Kreider suggests this is one of the few really promising substitutes for petroleum. Dr. By EV World We have the technology to convert corn cobs or coal into liquid fuels for our cars, trucks, trains and planes. The question is, should we? On the answer to this critical question hinges the fate of nations, as well as car makers. When Toyota went looking for a respected scientist to help them uncover the answer, they turned to Dr. "It is in the interest of national economic security to investigate alternative sources of transportation energy before the extraction of existing supplies becomes prohibitively expensive." -- Dr. Dr. Previous Sustainable Mobility Seminar Presentations Times Article Viewed: 8350

Still Tutorial: A Guide to Building a Column Reflux Still