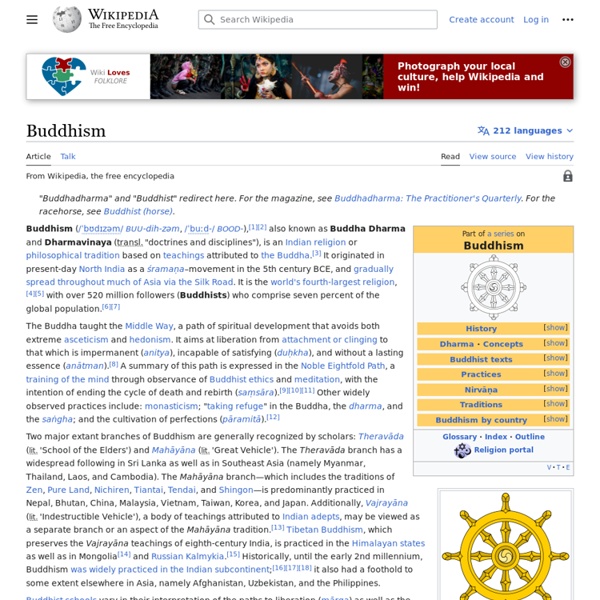 World religion founded by the Buddha Buddhism (, ) is the world's fourth-largest religion[3] with over 520 million followers, or over 7% of the global population, known as Buddhists.[6] Buddhism encompasses a variety of traditions, beliefs and spiritual practices largely based on original teachings attributed to the Buddha (born Siddhārtha Gautama in the 5th or 4th century BCE) and resulting interpreted philosophies. It originated in ancient India as a Sramana tradition sometime between the 6th and 4th centuries BCE, spreading through much of Asia. Two major extant branches of Buddhism are generally recognized by scholars: Theravāda (Pali: "The School of the Elders") and Mahāyāna (Sanskrit: "The Great Vehicle"). Theravada Buddhism has a widespread following in Sri Lanka and Southeast Asia such as Cambodia, Laos, Myanmar and Thailand. Mahayana, which includes the traditions of Pure Land, Zen, Nichiren Buddhism, Shingon and Tiantai (Tendai), is found throughout East Asia. Worldview Saṃsāra

Related:  More, More, & More Thoughts to give Thoughts to • Just So: An Odyssey into the Cosmic Web of Connection, Play, and True Pleasure • `néococ 0913b • The problems with philosophy • Buddhism

The Artists’ Rebellion I have this fantasy where the artists go on strike. I dream that one by one, in their own quiet ways, the artists, the writers, the musicians, the comedians, the graphic designers, the marketing gurus, the spinmeisters and press release writers, the jingle makers and advertising creatives, the seamstresses and cake decorators, will lay down their tools and refuse to work for evil anymore. The writer will stand up from her desk at Raytheon and walk away without lending them another word. The graphic designer at the State Department will turn off his Wacom and shut down Photoshop and pick up a pencil and start sketching homeless people. Whole marketing departments will turn their talents to telling the real story of what their organization does in words and jingles and graphics and logos while the hapless artless CEO looks on helplessly, threatening them with everything he’s got.

Impermanence Impermanence is a philosophical concept that appears in a variety of religions and philosophies. Indian religion[edit] The Pali word for impermanence, anicca, is a compound word consisting of "a" meaning non-, and "nicca" meaning "constant, continuous, permanent".[1] While 'nicca' is the concept of continuity and permanence, 'anicca' refers to its exact opposite; the absence of permanence and continuity. The term appears in the Rigveda, and is synonymous with the Sanskrit term anitya (a + nitya).[1][2] The term appears extensively in the Pali Canon.[1]

Buddhism - Definition, Founder & Origins Buddhism is a faith that was founded by Siddhartha Gautama (“the Buddha”) more than 2,500 years ago in India. With about 470 million followers, scholars consider Buddhism one of the major world religions. Its practice has historically been most prominent in East and Southeast Asia, but its influence is growing in the West. Many Buddhist ideas and philosophies overlap with those of other faiths. Buddhism Beliefs The World’s Most Powerful Passports in 2021 Due to current COVID-19 travel restrictions, Germany tops Arton Capital’s Passport Index with visa-free access to 134 destinations. share this article When taking current coronavirus-related border closures into account, a German passport currently gives you visa-free or visa-upon-arrival access to 134 destinations. This makes it the most powerful passport in the world right now, according to Arton Capital’s Passport Index, a ranking of the world’s passports in order of the number of destinations their holders can access without obtaining a visa prior to arrival. Unlike the Henley Passport Index, which placed Japan’s passport at the top of its 2021 rankings for the third consecutive year on January 5, Arton Capital’s Passport Index updates its rankings in real time as new visa waivers and changes are implemented, showing the current effect COVID-19 travel bans have on global mobility right now.

Skandha Skandhas (Sanskrit) or khandhas (Pāḷi) means "heaps, aggregates, collections, groupings".[1] In Buddhism, it refers to the five aggregates of clinging (Pancha-upadanakkhanda), the five bodily and mental factors that take part in the rise of craving and clinging. They are also explained as the five factors that constitute and explain a sentient being’s person and personality,[2][4] but this is a later interpretation in response to sarvastivadin essentialism. The five aggregates or heaps are: form (or matter or body) (rupa), sensations (or feelings, received from form) (vedana), perceptions (samjna), mental activity or formations (sankhara), and consciousness (vijnana).[5][6][7] Etymology[edit] Skandha (स्कन्ध) is a Sanskrit word that means "multitude, quantity, aggregate", generally in the context of body, trunk, stem, empirically observed gross object or anything of bulk verifiable with senses.[1][8] The term appears in the Vedic literature. Description of the five skandhas[edit]

Buddhism Buddhism is a non-theistic religion (no belief in a creator god), also considered a philosophy and a moral discipline, originating in India in the 6th and 5th centuries BCE. It was founded by the sage Siddhartha Gautama (the Buddha l. c. 563 - c. 483 BCE) who, according to legend, had been a Hindu prince before abandoning his position and wealth to become a spiritual ascetic and, finally, an enlightened being who taught others the means by which they could escape samsara, the cycle of suffering, rebirth, and death. The Buddha developed the belief system at a time when India was in the midst of significant religious and philosophical reform. Buddhism was, initially, only one of many schools of thought which developed in response to what was perceived as the failure of orthodox Hinduism to address the needs of the people.

Anteroom of Our Own Extinction John Steppling If you want to deprive citizens of freedom of movement, freedom of assembly and the right to family life, there should be written reasons. They ask the department why they can hardly find such anywhere since the intervention was introduced in March. It is a mystery that hardly any Norwegian journalists have thought of asking this question. { } …that should be every journalist’s first instinct when the government shuts down the country.” Øyvind Håbrekke (Candidate for Krk in Trondelog, Norway) I.

Buddhism in the United States We ask you, humbly: don't scroll away. Hi, reader in Canada, it seems you use Wikipedia a lot; that's great! This is the 10th appeal we've shown you. Man found living in Chicago airport for three months 'due to fear of Covid' A man has been living in a secure section of Chicago’s international airport for three months, apparently telling police he was too afraid of coronavirus to return home to Los Angeles, according to multiple reports. The 36-year-old man, Californian Aditya Singh, was arrested this weekend and charged with criminal trespass to a restricted area of an airport, a felony, and theft, a misdemeanour, the Chicago Tribune reported. Prosecutors said on Sunday that, according to police, the man arrived on a flight from Los Angeles to O’Hare international airport on 19 October. Nearly three months later, on Saturday afternoon, Singh was approached by two United Airlines employees who asked to see identification.

Five Tathagatas Cloth with painting of the Buddhas In Vajrayana Buddhism, the Five Tathāgatas (pañcatathāgata) or Five Wisdom Tathāgatas (Chinese: 五智如来; pinyin: Wǔzhì Rúlái), the Five Great Buddhas and the Five Jinas (Sanskrit for "conqueror" or "victor"), are emanations and representations of the five qualities of the Adi-Buddha or "first Buddha" Vairocana or Vajradhara, which is associated with the Dharmakāya.[1] They are also sometimes called the "dhyani-buddhas", a term first recorded in English by Brian Houghton Hodgson, a British Resident in Nepal,[2] in the early 19th century, and is unattested in any surviving traditional primary sources.[3] These five Buddhas are a common subject of Vajrayana mandalas. These five Buddhas feature prominently in various Buddhist Tantras and are the primary object of realization and meditation in Shingon Buddhism, a school of Vajarayana Buddhism founded in Japan by Kūkai. Origin[edit]

Why so many Americans think Buddhism is just a philosophy In East Asia, Buddhists celebrate the Buddha’s death and entrance into final enlightenment in February. But at my local Zen temple in North Carolina, the Buddha’s enlightenment is commemorated during the holiday season of December, with a short talk for the children, a candlelight service and a potluck supper following the celebration. Welcome to Buddhism, American-style. Early influences Buddhism entered into the American cultural consciousness in the late 19th century.