The religion of Buddhism 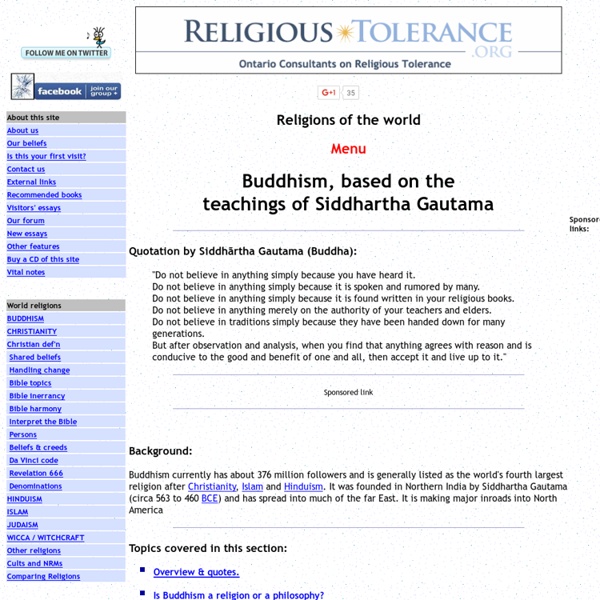 Religions of the world Menu Quotation by Siddhãrtha Gautama (Buddha): "Do not believe in anything simply because you have heard it. Do not believe in anything simply because it is spoken and rumored by many. Sponsored link Background: Buddhism currently has about 376 million followers and is generally listed as the world's fourth largest religion after Christianity, Islam and Hinduism. Topics covered in this section: Sponsored link: Amazon.com's online store lists the following books on Buddhism: If you see a generic Amazon.com ad here, please click on your browser's refresh key. For an introduction to Buddhism, we recommend the following books. Thubten Chodron, "Buddhism for Beginners." Not a sponsored link Site navigation: Copyright © 1996 to 2011 by Ontario Consultants on Religious Tolerance Latest update: 2013-JUL-08 Author: B.A. Sponsored link

THE BASIC TEACHING OF BUDDHA Following the Buddha's FootstepsInstilling Goodness SchoolCity of Ten Thousand BuddhasTalmage, CA 95481 As a child, Siddhartha the Buddha, was troubled by some of the same thoughts that children today have. They wonder about birth and death. They wonder why they get sick and why grandfather died. They wonder why their wishes do not come true. Children also wonder about happiness and the beauty in nature. Because the Buddha knew what was in the hearts of children and human kind, he taught everyone how to live a happy and peaceful life. Life in the Palace Buddhism is one of the major religions in the world. Soon after Prince Siddhartha was born, the wise men predicted that he would become a Buddha. At the age of sixteen, Prince Siddhartha married a beautiful princess, Yasodhara. The Four Sights Soon Siddhartha became disillusioned with the palace life and wanted to see the outside world. Renunciation Leaving his kingdom and loved ones behind, Siddhartha became a wandering monk. Enlightenment

Buddhism World religion founded by the Buddha Buddhism (, ) is the world's fourth-largest religion[3] with over 520 million followers, or over 7% of the global population, known as Buddhists.[6] Buddhism encompasses a variety of traditions, beliefs and spiritual practices largely based on original teachings attributed to the Buddha (born Siddhārtha Gautama in the 5th or 4th century BCE) and resulting interpreted philosophies. It originated in ancient India as a Sramana tradition sometime between the 6th and 4th centuries BCE, spreading through much of Asia. Two major extant branches of Buddhism are generally recognized by scholars: Theravāda (Pali: "The School of the Elders") and Mahāyāna (Sanskrit: "The Great Vehicle"). Theravada Buddhism has a widespread following in Sri Lanka and Southeast Asia such as Cambodia, Laos, Myanmar and Thailand. Life of the Buddha Ancient kingdoms and cities of India during the time of the Buddha (circa 500 BCE) Worldview Four Noble Truths – dukkha and its ending Karma

Om mani padme hum Oṃ maṇi padme hūṃ[1] (Sanskrit: ओं मणिपद्मे हूं, IPA: [õːː məɳipəd̪meː ɦũː]) is the six-syllabled Sanskrit mantra particularly associated with the four-armed Shadakshari form of Avalokiteshvara (Tibetan སྤྱན་རས་གཟིགས་(Chenrezig), Chinese 觀音(Guanyin), Japanese 観音(かんのん, Kannon), the bodhisattva of compassion. Mani means "jewel" or "bead" and Padma means "the lotus flower", the Buddhist sacred flower. It is commonly carved onto rocks or written on paper which is inserted into prayer wheels. When an individual spins the wheel, it is said that the effect is the same as reciting the mantra as many times as it is duplicated within the wheel. Transliterations[edit] In English the mantra is variously transliterated, depending on the schools of Buddhism as well as individual teachers. Karandavyuha Sutra[edit] Meaning[edit] Mantras may be interpreted by practitioners in many ways, or even as mere sequences of sound whose effects lie beyond strict meaning. 14th Dalai Lama[edit] Karma Thubten Trinley[edit]

Dharma Talk on "Compassionate Love" by Ven A Bite of Buddhism The four sublime mental states are qualities of mind that we cultivate in order to alleviate the suffering we experience in everyday life and to feel more connected to others—and the worries and fears we all share. In the language of the Buddha (Pali), they are called the brahma viharas , which means "the dwelling place of awakened beings." The good news for us unawakened beings is that it's easy to begin cultivating the brahma viharas . Indeed, they are an integral part of other religious, spiritual, and humanistic traditions. I present them here with a distinctly Buddhist "flavor." Metta . I like to think of metta as the simple act of well-wishing. Sylvia once said that she practices metta by just looking at a person and silently saying, "I love you." Karuna . The Vietnamese Zen master, Thich Nhat Hanh, helped me learn to cultivate compassion for myself. Mudita . Just as metta is an antidote for our judgmental tendencies, mudita is the perfect antidote for envy. Upekkha .

5 Minute Introduction • What is Buddhism? Buddhism is a religion to about 300 million people around the world. The word comes from 'budhi', 'to awaken'. It has its origins about 2,500 years ago when Siddhartha Gotama, known as the Buddha, was himself awakened (enlightened) at the age of 35. • Is Buddhism a Religion? To many, Buddhism goes beyond religion and is more of a philosophy or 'way of life'. (1) to lead a moral life, (2) to be mindful and aware of thoughts and actions, and (3) to develop wisdom and understanding. • How Can Buddhism Help Me? Buddhism explains a purpose to life, it explains apparent injustice and inequality around the world, and it provides a code of practice or way of life that leads to true happiness. • Why is Buddhism Becoming Popular? Buddhism is becoming popular in western countries for a number of reasons, The first good reason is Buddhism has answers to many of the problems in modern materialistic societies. • Who Was the Buddha? • Was the Buddha a God? • Do Buddhists Worship Idols?

BEGINNER'S GUIDE ... © 1995 Dharman Craig PressonAll Rights Reserved “Zen is not what you think!” -- anonymous Preface The purpose of this little book is to assure that all studentsunderstand the mechanics of Zen practice and the basic teachings ofBuddhism. Part 1: Practice Sitting, Breathing, Walking Seated meditation (J. zazen, Ch. The Sitting Posture (asana) There are several good postures for zazen: four cross-legged, onekneeling, and one using a straight chair or camp stool, as illustrated[Add illustrations of full lotus, half-lotus, sukhasana, Burmese, seiza,and chair sitting]. Breathing One may be given specific instructions by a teacher regarding theproper focus of awareness during zazen. Do not force or control the breath in any way. Walking (Kinhin) Walking meditation may be practiced between sessions of sitting.This relieves the legs of cramps and “pins and needles”, andallows one to begin the process of carrying one’s practice off thecushion and into daily activity. Part 2: Theory The Buddha The Dharma

Buddha Teachings Following the Buddha's FootstepsInstilling Goodness SchoolCity of Ten Thousand BuddhasTalmage, CA 95481 As a child, Siddhartha the Buddha, was troubled by some of the same thoughts that children today have. They wonder about birth and death. They wonder why they get sick and why grandfather died. Because the Buddha knew what was in the hearts of children and human kind, he taught everyone how to live a happy and peaceful life. Life in the Palace Buddhism is one of the major religions in the world. Soon after Prince Siddhartha was born, the wise men predicted that he would become a Buddha. At the age of sixteen, Prince Siddhartha married a beautiful princess, Yasodhara. The Four Sights Soon Siddhartha became disillusioned with the palace life and wanted to see the outside world. On his fourth trip, he saw a wandering monk who had given up everything he owned to seek an end to suffering. Renunciation Leaving his kingdom and loved ones behind, Siddhartha became a wandering monk. Enlightenment

Buddhism Basics Buddhism is a major Asian religion that began in India in the 6th century C.E., spread to China, and then to the rest of the world. It is centered around the teachings of a man named Siddhartha Gautama who came to be known as "the Buddha" after he achieved enlightenment into true reality when he was about 35 years old. Siddhartha Gautama, or the historical Buddha, was born a Hindu and grew up in Hindu culture. Therefore, Buddhist philosophy contains some basic Hindu ideas, much like Christianity contains some Jewish ideas. Buddhism, like any other major world religion, contains different groups within it. Theravada means "doctrine of the elders" and is one of the earliest forms of Buddhist religion. Mahayana means "great vehicle" which is a term that arose, to an extent, in opposition to Theravada. Vajrayana means "thunderbolt" or "diamond" vehicle and is a form of Buddhism prominent in Tibet and in other areas which feature tantric and shamanistic practices.