The Story of Human Language

Windsor, Berkshire. Windsor is a historic market town and unparished area in the Royal Borough of Windsor and Maidenhead in Berkshire, England. 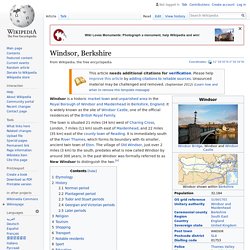 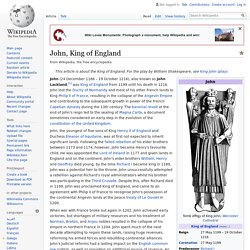 John lost the Duchy of Normandy and most of his other French lands to King Philip II of France, resulting in the collapse of the Angevin Empire and contributing to the subsequent growth in power of the French Capetian dynasty during the 13th century. The baronial revolt at the end of John's reign led to the sealing of Magna Carta, a document sometimes considered an early step in the evolution of the constitution of the United Kingdom. John, the youngest of five sons of King Henry II of England and Duchess Eleanor of Aquitaine, was at first not expected to inherit significant lands. Following the failed rebellion of his elder brothers between 1173 and 1174, however, John became Henry's favourite child. Early life (1166–1189)[edit] Stephen Langton. 13th-century Archbishop of Canterbury, theologian, and cardinal Early life and career[edit] His father was Henry Langton, a landowner in Langton by Wragby, Lincolnshire. 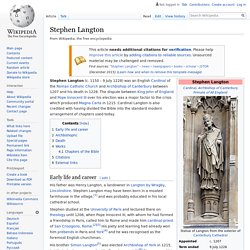 Stephen Langton may have been born in a moated farmhouse in the village,[1] and was probably educated in his local cathedral school. Stephen studied at the University of Paris and lectured there on theology until 1206, when Pope Innocent III, with whom he had formed a friendship in Paris, called him to Rome and made him cardinal-priest of San Crisogono, Rome.[2][3] His piety and learning had already won him prebends in Paris and York[4] and he was recognised as the foremost English churchman. 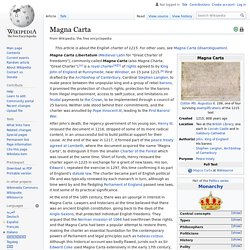 [b] First drafted by the Archbishop of Canterbury to make peace between the unpopular King and a group of rebel barons, it promised the protection of church rights, protection for the barons from illegal imprisonment, access to swift justice, and limitations on feudal payments to the Crown, to be implemented through a council of 25 barons. Neither side stood behind their commitments, and the charter was annulled by Pope Innocent III, leading to the First Barons' War. After John's death, the regency government of his young son, Henry III, reissued the document in 1216, stripped of some of its more radical content, in an unsuccessful bid to build political support for their cause.

East Asia. East Asia or Eastern Asia is the eastern subregion of the Asian continent, which can be defined in either geographical[1] or cultural[2] terms. 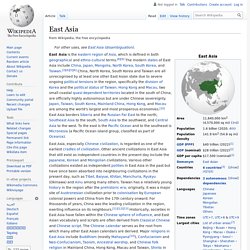 Geographically and geopolitically, it covers about 12,000,000 km2 (4,600,000 sq mi), or about 28% of the Asian continent, about 15% bigger than the area of Europe. More than 1.5 billion people, about 38% of the population of Asia and 22% or over one fifth of all the people in the world, live in East Asia. The region is one of the world's most populated places, with a population density of 133 inhabitants per square kilometre (340/sq mi), being about three times the world average of 45/km2 (120/sq mi), although Mongolia has the lowest population density of a sovereign state.

Using the UN subregion definitions, East Asia ranks second in population only to Southern Asia. History[edit] As connections began to strengthen with the Western world, China's power began to diminish. North Korea. Coordinates: North Korea, officially the Democratic People's Republic of Korea (abbreviated as DPRK or DPR Korea), is a sovereign state in East Asia constituting the northern part of the Korean Peninsula. 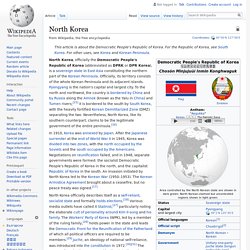 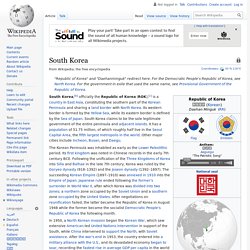 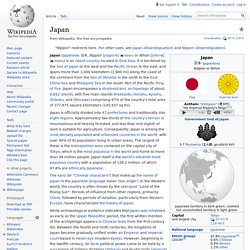 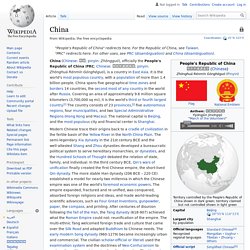 It is the world's most populous country, with a population of around 1.4 billion.[8] Covering approximately 9.6 million square kilometers (3.7 million mi2), it is the world's third or fourth-largest country by area. [l] The country is officially divided into 23 provinces,[m][18] five autonomous regions, four direct-controlled municipalities (Beijing, Tianjin, Shanghai, and Chongqing), and the special administrative regions of Hong Kong and Macau. China is nominally a unitary one-party socialist republic.

The country is a permanent member of the United Nations Security Council since replacing the ROC in 1971. Taiwan. State in East Asia Coordinates: 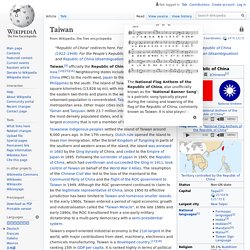 Madagascar. Island country in the Indian Ocean Coordinates: 20°S 47°E / 20°S 47°E / -20; 47. French language. French (le français [lə fʁɑ̃sɛ] or la langue française [la lɑ̃ɡ fʁɑ̃sɛz]) is a Romance language of the Indo-European family. It descended from the Vulgar Latin of the Roman Empire, as did all Romance languages. French has evolved from Gallo-Romance, the spoken Latin in Gaul, and more specifically in Northern Gaul. Its closest relatives are the other langues d'oïl—languages historically spoken in northern France and in southern Belgium, which French (Francien) has largely supplanted. French was also influenced by native Celtic languages of Northern Roman Gaul like Gallia Belgica and by the (Germanic) Frankish language of the post-Roman Frankish invaders. Today, owing to France's past overseas expansion, there are numerous French-based creole languages, most notably Haitian Creole.

Geographic distribution[edit] Help:IPA/Malagasy. The charts below show the way in which the International Phonetic Alphabet (IPA) represents Malagasy pronunciations in Wikipedia articles. English approximations are in some cases very loose, and only intended to give a general idea of the pronunciation. See Malagasy language#Phonology for details. ^ Jump up to: a b c d /ts dz s z/ vary between these sounds, depending on speaker and situation. The latter is especially common when followed by the vowel /i/, including its reduced form [ʲ]. That is, [sʲ] is generally closer to English shill.^ Jump up to: a b As the Malagasy spellings ‹tr, dr› suggest, /ʈʂ ɖʐ/ may be released into a trill, depending on speaker and situation. Antananarivo Madagascar - Google-Suche. Austronesian languages. Farming and Language in Island Southeast Asia on JSTOR. The Austronesians: Historical and Comparative Perspectives on JSTOR. Europe. Continent Map of populous Europe showing physical, political and population characteristics, as per 2018.

Balkans. "Balkan states" redirects here. It is not to be confused with Baltic states. The Balkan Peninsula, or the Balkans, is a peninsula and a cultural area in Eastern and Southeastern Europe with various and disputed borders.[1] The region takes its name from the Balkan Mountains that stretch from the Serbia-Bulgaria border to the Black Sea. Turkey. Country straddling Southeastern Europe and Western Asia. Mustafa Kemal Atatürk. Mustafa Kemal Atatürk (pronounced [mustäˈfä ceˈmäl äˈtäˌtyɾc]; 19 May 1881 (conventional) – 10 November 1938) was a Turkish army officer, revolutionary, and the first President of Turkey.