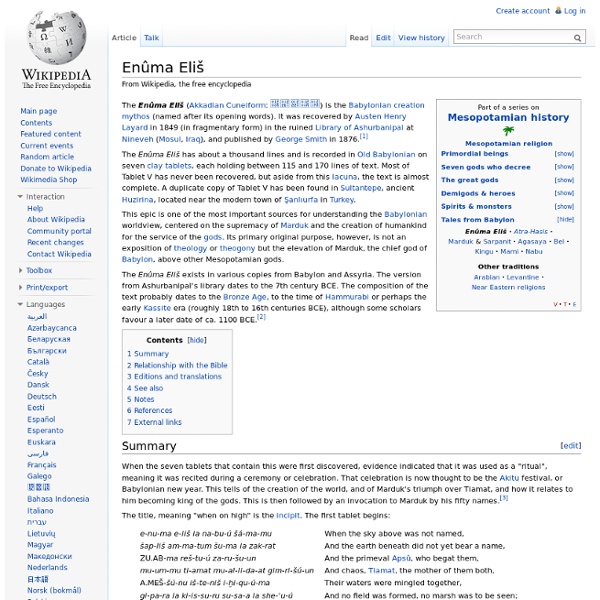 This epic is one of the most important sources for understanding the Babylonian worldview, centered on the supremacy of Marduk and the creation of humankind for the service of the gods. Its primary original purpose, however, is not an exposition of theology or theogony but the elevation of Marduk, the chief god of Babylon, above other Mesopotamian gods. The Enûma Eliš exists in various copies from Babylon and Assyria. The version from Ashurbanipal's library dates to the 7th century BCE. The composition of the text probably dates to the Bronze Age, to the time of Hammurabi or perhaps the early Kassite era (roughly 18th to 16th centuries BCE), although some scholars favour a later date of c. 1100 BCE.[2] Summary[edit] When the seven tablets that contain this were first discovered, evidence indicated that it was used as a "ritual", meaning it was recited during a ceremony or celebration. The title, meaning "when on high", is the incipit. Relationship with the Bible[edit] See also[edit]

Greek mythology Greek mythology is explicitly embodied in a large collection of narratives, and implicitly in Greek representational arts, such as vase-paintings and votive gifts. Greek myth attempts to explain the origins of the world, and details the lives and adventures of a wide variety of gods, goddesses, heroes, heroines and mythological creatures. These accounts initially were disseminated in an oral-poetic tradition; today the Greek myths are known primarily from Greek literature. Archaeological findings provide a principal source of detail about Greek mythology, with gods and heroes featured prominently in the decoration of many artifacts. Geometric designs on pottery of the eighth century BC depict scenes from the Trojan cycle as well as the adventures of Heracles. Sources Literary sources The poetry of the Hellenistic and Roman ages was primarily composed as a literary rather than cultic exercise. Archaeological sources Survey of mythic history Origins of the world and the gods

Coatlicue Coatlicue, also known as Teteoinan (also transcribed Teteo Inan), "The Mother of Gods" (Classical Nahuatl: Cōhuātlīcue [koːwaːˈt͡ɬiːkʷe], Tēteô īnnān), is the Aztec goddess who gave birth to the moon, stars, and Huitzilopochtli, the god of the sun and war. She is also known as Toci (Tocî, "our grandmother") and Cihuacoatl (Cihuācōhuātl, "the lady of the serpent"), the patron of women who die in childbirth. Etymology[edit] The word Coatlicue is Nahuatl for "the one with the skirt of serpents". The word for serpent is coātl. "Mother Goddess of the Earth who gives birth to all celestial things", "Goddess of Fire and Fertility", "Goddess of Life, Death and Rebirth", and "Mother of the Southern Stars." Myths[edit] Most Aztec artistic representations of this goddess emphasize her deadly side, because Earth, as well as loving mother, is the insatiable monster that consumes everything that lives. See also[edit] Aztec mythology in popular culture, book: Borderland/ La Frontera by: Gloria Anzaldua

Hiranyagarbha Click an area to go there. This is one of many material universes, Brahmāṇḍa, which expand from Mahā Viṣṇu when He breathes. Hiraṇyagarbha (Devanagari: हिरण्यगर्भः ; literally the 'golden womb' or 'golden egg', poetically rendered 'universal germ') is the source of the creation of the Universe or the manifested cosmos in Indian philosophy,[1] it finds mention in one hymn of the Ṛigveda (RV 10.121), known as the 'Hiraṇyagarbha Sūkta', suggesting a single creator deity(verse 8: yo deveṣv ādhi devā eka āsīt, Griffith:"He is the God of gods, and none beside him."), in the hymn identified as Prajāpati The concept golden womb is again mentioned in Viswakarma suktha Rg 10-82. The Upaṇiṣad calls it the Soul of the Universe or Brahman,[2] and elaborates that Hiraṇyagarbha floated around in emptiness and the darkness of the non-existence for about a year, and then broke into two halves which formed the Svarga and the Pṛthvi. Creation[edit] Hiraṇyagarbha Shaligram Shila For Altar[edit] ॐ ! 1. 2. 3.

Kumulipo In ancient Hawaiian mythology, the Kumulipo is a chant in the Hawaiian language telling a creation story.[1] It also includes a genealogy of the members of Hawaiian royalty. Creation chant[edit] Many cultures have their own beliefs on how the earth came to be created. He Kumulipo means "A source of darkness or origin".[1] In some cultures, children are brought up thinking that the dark is a bad place, one to avoid. In the Kumulipo the world was created over a cosmic night. Years later Queen Liliʻuokalani described the chant as a prayer of the development of the universe and the ancestry of the Hawaiians.[4] Liliʻuokalani translated the chant under house arrest in Iolani Palace. The Kumulipo is a total of 2102 lines long, in honor of Lonoikamakahiki, who created peace for all when he was born. Divisions[edit] The Kumulipo is divided into sixteen wā, sections. These are the first four lines of the Kumulipo: Births in each wā[edit] The births in each age include:[7] Comparative literature[edit]

Völuspá Völuspá (Old Norse Vǫluspá, Prophecy of the Völva (Seeress); Modern Icelandic [ˈvœːlʏˌspauː], reconstructed Old Norse [ˈwɔluˌspɑː]) is the first and best known poem of the Poetic Edda. It tells the story of the creation of the world and its coming end related by a völva addressing Odin. It is one of the most important primary sources for the study of Norse mythology. The poem is preserved whole in the Codex Regius and Hauksbók manuscripts while parts of it are quoted in the Prose Edda. It consists of approximately 60 fornyrðislag stanzas. Preservation[edit] Völuspá is found in the Codex Regius manuscript (ca. 1270) and in Haukr Erlendsson's Hauksbók Codex (ca. 1334), and many of its stanzas are quoted or paraphrased in Snorri Sturluson's Prose Edda (composed ca. 1220, oldest extant manuscript dates from ca. 1300). Structure[edit] The poem consists of some 60 fornyrðislag stanzas. Synopsis[edit] The new world that rises after Ragnarök (depiction by Emil Doepler) In popular culture[edit] J.