How to Meditate - Guided Meditation Techniques 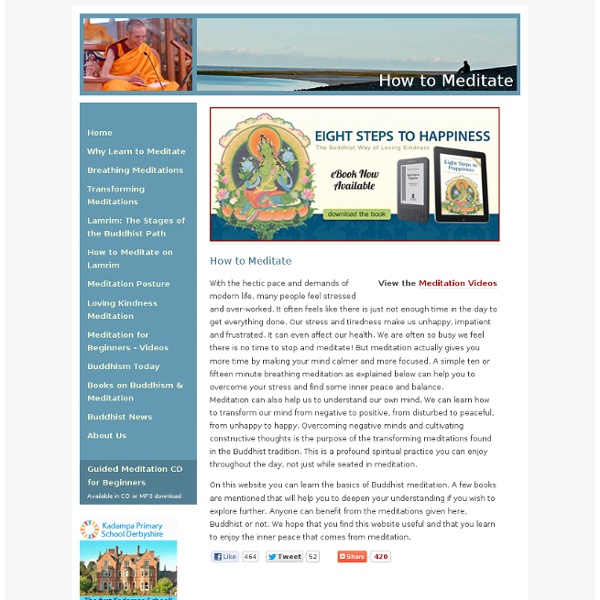 Buddhadharma - Home Buddhist Geeks - Download free podcast episodes by Personal Life Media on iTunes. Urban Dharma - Buddhism in America Meaning of the Medicine Buddha Mantra 1. OM: we begin with Om, the under-current tone of the universe 2. 3. 4. 5. 6. 7. 8. 9. 10. 11. 12. 13. 14. 15. 16. (my prayer shall go to the highest and the widest and the deepest) 17. Explanation of the meaning of the Mantra Bekandze means eliminating pain, maha bekandze means great eliminating of pain. The second bekandze eliminates all the true cause of suffering, which is not external but within the mind. Scientists claim that intense exposure to the sun causes skin cancer. For example, not everyone who sunbathes on the beach gets skin cancer. If someone has created the cause, as long as they do not do anything to purify it, the cause will definitely bring its own result; just as a seed that is planted will definitely result in a sprout as long as it is not eaten by birds, and so forth. So, the second bekandze refers to eliminating the cause of problems, karma motivated by disturbing thoughts.

Buddhism now Shambhala SunSpace Read the intro from the new Shambhala Sun book, Buddha’s Daughters: Teachings from Women Who Are Shaping Buddhism in the West In addition to A Beginner’s Guide to Meditation, this Spring marks the release of another Shambhala Sun book, Buddha’s Daughters, edited by Shambhala Sun Deputy Editor Andrea Miller. The book is available now — click here to order or for more information. Below, you can read Andrea’s introduction to the book (as well as browse its chock-full Table of Contents). Buddha’s Daughters: Introduction I had my first taste of Buddhism in university when I took a class on Chinese and Japanese religions. My professor did not go on to address modern Buddhism’s state of flux—that was beyond the scope of our class. Artist and former Buddhist monk Andrew Binkley explores “A Space Between” in Hawaii museum installation Photography collage from the “Just Being” series. Tell us what you think of the May Shambhala Sun in our quick online survey Thanks, Melvin (McLeod) Scrabble goes Zen?

Thinking in Buddhism All chapters Notes: The most readable version of this thesis is the nicely-formatted PDF (created by Christopher Richardson in 2001). The 1994 original was written in the TEX publishing code, which did not allow for easy conversion to html. Some characters are missing. Preface Any research into a school of thought whose texts are in a foreign language encounters certain difficulties in deciding which words to translate and which ones to leave in the original. Finally, two processing errors must be explained. "Misery only doth exist, none miserable, No doer is there; naught save the deed is found. Chapter 1 Introduction The study of Buddhism has in recent years become quite a vogue in the West. Buddhism also seemed curious to the Western mind because, like so many Oriental philosophies, it was neither really a philosophy nor a religion, but something with elements of both. The form of Buddhism that has most captured the attention of the West, especially America, is Japan's Zen. Note: Cf.

Green Tara and White Tara - Feminist Ideals in Buddhist Art Goddess Tara, a female Buddha and meditational deity, is arguably the most popular goddess in the Buddhist pantheon. She is considered to be the goddess of universal compassion who represents virtuous and enlightened activity. The word Tara itself is derived from the root 'tri' (to cross), hence the implied meaning:' the one who enables living beings to cross the Ocean of Existence and Suffering'. Her compassion for living beings, her desire to save them from suffering, is said to be even stronger than a mother's love for her children. The story of Tara's origin, according to the Tara Tantra, recounts that aeons ago she was born as a king's daughter. A spiritual and compassionate princess, she regularly gave offerings and prayers to the ordained monks and nuns. Another legend of Tara is that she was born from the compassionate tears of Avalokiteshvara (The Buddha of compassion): "Homage! ... The above verse refers to the legend of Tara's origin. ... Green Tara ...