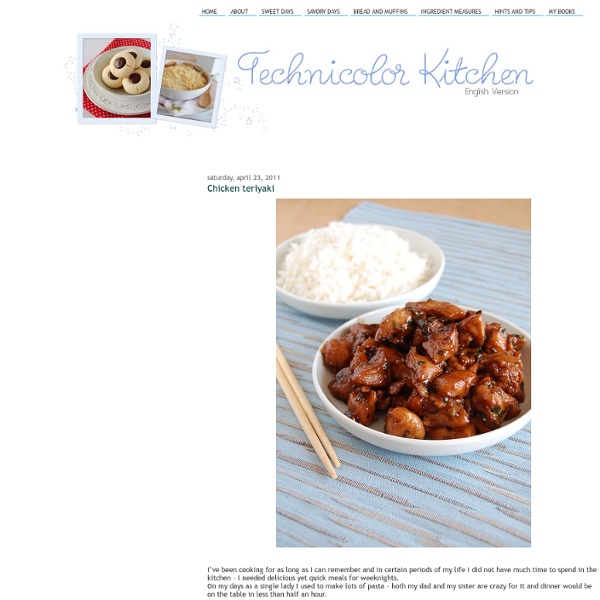 I’ve been cooking for as long as I can remember and in certain periods of my life I did not have much time to spend in the kitchen – I needed delicious yet quick meals for weeknights. On my days as a single lady I used to make lots of pasta – both my dad and my sister are crazy for it and dinner would be on the table in less than half an hour. Recently I’ve been trying my hand at Asian recipes and some of them are absolutely delicious – and equally fast. Let me tell you something: if my husband liked it, picky people everywhere will probably like it, too. Chicken teriyaki slightly adapted from the wonderful Nigella Kitchen In a bowl large enough to hold all the chicken pieces, mix together the sake, mirin, soy sauce, sugar, ginger, spring onions and sesame oil. Serves 4-6 – I halved the recipe above and Joao and I ate every little bit of it. :)

Apple Chips I hope everyone had a great Father's Day! If you're not a dad, then I hope you did something special for the dad(s) in your life. Much like the speech I gave you about moms, hopefully you make them feel special on a regular basis... but nonetheless Father's Day is a good excuse to go above & beyond! I spent the day with both my dad & my father-in-law, which was great, and I will see my stepdad later this week. Mr. No, our only 'child' at this point is our little Senegal parrot, CJ. She's technically Mr. Recently we decided that since CJ has had the same cage for about 13 years now, she deserves a new one. We went to Petco and picked out a really awesome one that's way bigger and cooler than her old one. For one, Mr. But what he didn't realize was that's for Senegal parrots in the wild. In captivity, she could live for fifty years. Fifty. Five-zero. Half a century. Are you kidding me?? (Hmm, I can relate to that.) What?!? This was news to us. Apparently, we are dreadful 'parents'. Ah ha!

Slow Cooker Chicken Tikka Masala 38K+ I think my all-time, stranded on a desert island and can't have anything else, favorite recipe has got to be my Slow Cooker Butter Chicken. It is rich and warm and I could eat it until my insides burst. Whenever I make Indian food, THIS is what I make. Hands down. When I went to make my favorite recipe about a month ago, I realized I was missing a can of coconut milk. It's a pretty essential ingredient in the recipe, but I had already starting browning the chicken. Please don't be overwhelmed when you see the list of ingredients. Serves 4 Chicken Tikka: 1 cup plain yogurt 1 tbsp lemon juice 2 tsp cumin 1/4-1 tsp cayenne (depending on how spicy you like it) 1 tsp cinnamon 1 tsp pepper 1 tsp salt 6-8 chicken thighs (skin on, bone-in) Stir all ingredients except chicken into the bottom of a large plastic container. 1/2 tsp cumin 1/2 tsp chili powder 1/2 tsp garam masala Salt 1 cup cream 2 tbsp fresh cilantro, chopped Turn your oven to broil. THE RESULTS?

Honey Sauced Chicken Hi Pinterest visitors! This recipe is delicious, but I have a few others that we LOVE EVEN MORE! to be pointed to my main page with the most recent recipes, or to get to all of our favorite Chicken recipes! Thanks for stopping in! Oooo this meal was good...probably because it was a piece of cake, and because it was delicious! Honey Sauced Chicken 3/4 pound chicken (of your choice) 1/2 tsp. salt 1/4 tsp. black pepper 1/2 cup honey 1/4 cup soy sauce 1/8 cup chopped onion (or 1/16 cup onion flakes) 1/8 cup ketchup 1 Tbs. vegetable oil 1 clove garlic, minced 1/4 tsp. red pepper flakes Season both sides of chicken with salt and pepper, put into crock pot. To bake chicken as a 30 minute meal: Dice chicken and season both sides with salt and pepper, place in 8x8 pan. Serves 2. Recipe from: Crock Pot Recipe Card Collection

Chicken Enchiladas aka the best enchiladas ever! Thank you so much to Laura, at Tide and Thyme, for introducing me to this recipe. Seriously - they were so so good I can't even tell you. OK so on to the recipe. Seriously, make these ASAP! Chicken Enchiladas with Red Chile Sauceadapted from Tide and Thyme, orginally from America's Test Kitchen 1 medium onion, chopped fine2 jalapenos, seeded and chopped fine1 teaspoon canola oil3 medim cloves garlic, minced3 Tablespoons chili powder2 teaspoons ground cumin3 teaspoons sugar1 15-oz can tomato sauce1 cup water1 large beefsteak tomato, seeded and chopped1 pound boneless, skinless chicken breasts (2 large breasts)1 cup extra sharp white cheddar, shredded1 cup monterey jack cheese, shredded1/2 cup minced fresh cilantro12 (6-inch) soft corn tortillascooking spraysalt and ground black pepperPreheat oven to 425. Nestle the chicken into the sauce. Strain the sauce through a strainer into a medium bowl, pressing the onion mixture to extract as much liquid as possible.

Baked Zucchini Sticks and Sweet Onion Dip: that bloomin’ zucchini! Today, class, it being late July and all, we’re going to examine our zucchini facts: •Zucchini is always at the end of any A-to-Z food list; •Zucchini and fruitcake are the undeserving targets of many a joke; •The zucchini plant literally grows like a weed, making it absolutely ubiquitous in vegetable gardens across America; •And for that reason, enterprising cooks have discovered ways to turn it into muffins, and cake, and pancakes, and… Baked Zucchini Sticks. You know that onion appetizer that came into bloom back in the late ’80s? These zucchini sticks, with their melty-soft interior and crisp crust, are reminiscent of those onions – and equally addictive, especially when served with their special onion-mustard dip. Ready to go beyond muffins, bread, kebabs, and frittata? First, find yourself 3 medium-size zucchini, about 9″ to 10″ long. That won’t be hard at this time of the year, right? Cut each zucchini into 3″ sticks about the diameter of your finger. Process until fairly smooth.

Southern Chicken and Corn Chowder Recipe This hearty chicken and corn chowder comes together easily and cooks for a comforting corn chowder you’ll love. Corn chowder makes a comforting cool weather recipe. Amp it up a bit by adding chicken to the classic corn chowder recipe and you have a meal that everyone will love. As the weather starts to get cooler in the evenings and the sun sets a bit earlier, I start craving hearty meals of soups and stews and casseroles. In other words, I turn to comfort foods, my favorite always being those from treasured family recipes. It reminds me of a time when Little Buddy was REALLY a wee Little Buddy. “Grandmother Verdie’s coming? “No honey, I’m making her recipe for Chicken and Dumplings. As we were finishing our Chicken and Dumplings, Little Buddy peeped over the rim of his spoon at me and said, “These pillows taste like a big hug.” I should have just changed the official name of Chicken and Dumplings right then and there to Chicken and Pillows it was so precious. Here’s how I make it. Enjoy!