Just So: An Odyssey into the Cosmic Web of Connection, Play, and True Pleasure 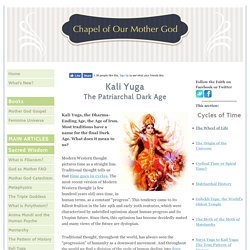 Most traditions have a name for the final Dark Age. What does it mean to us? Modern Western thought pictures time as a straight line. Traditional thought tells us that time goes in cycles. The most recent version of Modern Western thought (a few hundred years old) sees time, in human terms, as a constant "progress". Traditional thought, throughout the world, has always seen the "progression" of humanity as a downward movement. To understand this Cycle, we have to realise that it is fundamentally a cycle of solidification or materialisation. It is natural that when this "consolidation" is near completion and maid has become wholly a creature of the material realm, numerous advances will be made along purely material lines, and ultimately, maid will forget that there was ever any other aspect to life.

What is Kali Yuga? - Definition from Yogapedia. Upliftconnect. Kali Yuga. Not to be confused with Kali Yug, a 1963 Italian film Current Yuga[edit] The duration and chronological starting point in human history of Kali Yuga has given rise to different evaluations and interpretations. 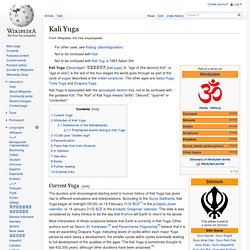 According to the Surya Siddhanta, Kali Yuga began at midnight (00:00) on 18 February 3102 BCE[1] in the proleptic Julian calendar, or 14 January 3102 BCE in the proleptic Gregorian calendar. This date is also considered by many Hindus to be the day that Krishna left Earth to return to his abode. Most interpreters of Hindu scriptures believe that Earth is currently in Kali Yuga. Attributes of Kali Yuga[edit] Hindus believe that human civilization degenerates spiritually during the Kali Yuga,[5] which is referred to as the Dark Age because in it people are as far away as possible from God. Gary Snyder. Gary Snyder (born May 8, 1930) is an American man of letters. 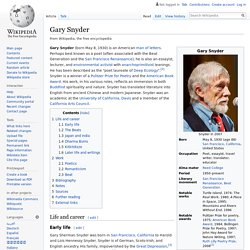 Perhaps best known as a poet (often associated with the Beat Generation and the San Francisco Renaissance), he is also an essayist, lecturer, and environmental activist with anarchoprimitivist leanings. He has been described as the "poet laureate of Deep Ecology".[2] Snyder is a winner of a Pulitzer Prize for Poetry and the American Book Award. His work, in his various roles, reflects an immersion in both Buddhist spirituality and nature. Snyder has translated literature into English from ancient Chinese and modern Japanese. Womb Realm. In Vajrayana Buddhism, the Womb Realm (Sanskrit: garbhakoṣadhātu, Japanese: 胎蔵界 taizōkai) is the metaphysical space inhabited by the Wisdom Kings. 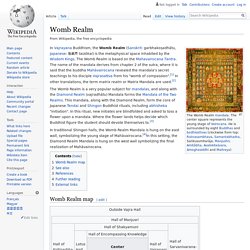 The Womb Realm is based on the Mahavairocana Tantra. The name of the mandala derives from chapter 2 of the sutra, where it is said that the buddha Mahāvairocana revealed the mandala's secret teachings to his disciple Vajrasattva from his "womb of compassion".[1] In other translations, the term matrix realm or Matrix Mandala are used.[2] The Womb Realm is a very popular subject for mandalas, and along with the Diamond Realm (vajradhātu) Mandala forms the Mandala of the Two Realms. Wisdom King. In Vajrayana Buddhism, a Wisdom King (Sanskrit Vidyārāja, Chinese: 明王; pinyin: Míngwáng; Japanese pronunciation: Myōō) is the third type of deity after buddhas and Bodhisattvas. 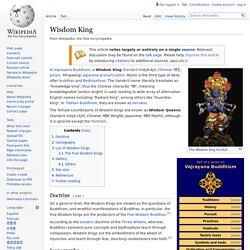 The Sanskrit name literally translates as "knowledge king", thus the Chinese character "明", meaning knowledgeable (and/or bright) is used, leading to wide array of alternative English names including "Radiant King", among others like "Guardian King". In Tibetan Buddhism, they are known as Herukas. Diamond Realm. Diamond Realm (Kongokai) Mandala of the Shingon school Tibetan painting of Vajradhatu In Vajrayana Buddhism, the Diamond Realm (Skt. 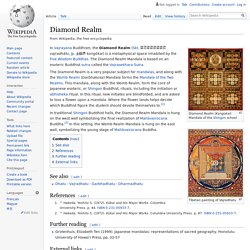 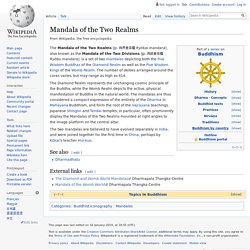 両界曼荼羅 Ryōkai mandara), also known as the Mandala of the Two Divisions (Jp. 両部曼荼羅 Ryōbu mandara), is a set of two mandalas depicting both the Five Wisdom Buddhas of the Diamond Realm as well as the Five Wisdom Kings of the Womb Realm. The number of deities arranged around the cores varies, but may range as high as 414. The Diamond Realm represents the unchanging cosmic principle of the Buddha, while the Womb Realm depicts the active, physical manifestation of Buddha in the natural world. The mandalas are thus considered a compact expression of the entirety of the Dharma in Mahayana Buddhism, and form the root of the Vajrayana teachings. The two mandalas are believed to have evolved separately in India, and were joined together for the first time in China, perhaps by Kūkai's teacher Hui-kuo. See also[edit] Dharmadhatu External links[edit] Akshobhya. In Vajrayana Buddhism, Akshobhya (Sanskrit: अक्षोभ्य, Akṣobhya, "Immovable One"; simplified Chinese and Japanese: 阿閦如来; pinyin: Āchùrúlái; ) is one of the Five Wisdom Buddhas, a product of the Adibuddha, who represents consciousness as an aspect of reality. 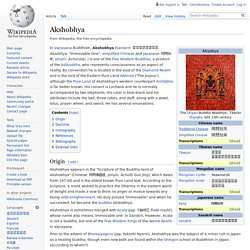 By convention he is located in the east of the Diamond Realm and is the lord of the Eastern Pure Land Abhirati ('The Joyous'), although the Pure Land of Akshobhya's western counterpart Amitābha is far better known. His consort is Lochanā and he is normally accompanied by two elephants. His color is blue-black and his attributes include the bell, three robes, and staff, along with a jewel, lotus, prayer wheel, and sword. He has several emanations. 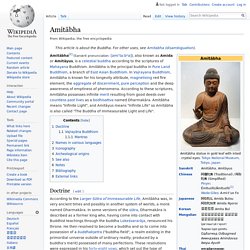 佛說大乘無量壽莊嚴清淨平等覺經科註). Statue of the Buddha Amitābha (Mongolia, 18th century). Doctrine[edit] In the versions of the sutra widely known in China, Vietnam, Korea and Japan, Dharmakāra's eighteenth vow was that any being in any universe desiring to be reborn into Amitābha's pure land (Chinese: 净土; pinyin: jìngtŭ; Japanese pronunciation: jōdo; Korean: 정토; romaja: jeongto; Vietnamese: tịnh độ) and calling upon his name even as few as ten times will be guaranteed rebirth there. His nineteenth vow promises that he, together with his bodhisattvas and other blessed Buddhists, will appear before those who, at the moment of death, call upon him. The sutra goes on to explain that Amitābha, after accumulating great merit over countless lives, finally achieved buddhahood and is still residing in his land of Sukhāvatī, whose many virtues and joys are described. Amoghasiddhi. Characteristics[edit] 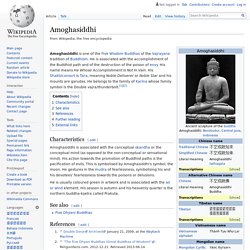 Esoteric Buddhism (Jp. = Mikkyō 密教) is another term for Vajrayana (Tantric) Buddhism, one of the three main schools of Buddhism in Asia, most widely practiced today in Tibet. The other two forms are Theravada and Mahayana Buddhism. Great Sun Buddha · Oasis Reiki Dojo's Reiki Help Blog. Wisdom is a cornerstone attribute of life and quality living. The previous post laid down detailed groundwork on the nature of wisdom and its many permutations.

‘Perennial wisdom’ and ‘wisdom traditions’ have been mentioned many times here. Vairocana. Vairocana (also Mahāvairocana, Sanskrit: वैरोचन) is a celestial buddha who is often interpreted, in texts like the Avatamsaka Sutra, as the dharmakāya[1][2][3] of the historical Gautama Buddha. In Chinese, Korean, and Japanese Buddhism, Vairocana is also seen as the embodiment of the Buddhist concept of Śūnyatā. In the conception of the Five Tathagatas of Mahayana and Vajrayana Buddhism, Vairocana is at the centre and is considered a Primordial Buddha. Vairocana is not to be confused with Vairocana Mahabali, son of Virochana. History of devotion[edit] Now, I, Vairocana Buddha am sitting atop a lotus pedestal; On a thousand flowers surrounding me are a thousand Sakyamuni Buddhas. Adi-Buddha. Mahāvairocana. Vairocana/Mahāvairocana - Buddhism. Mahavairochana.