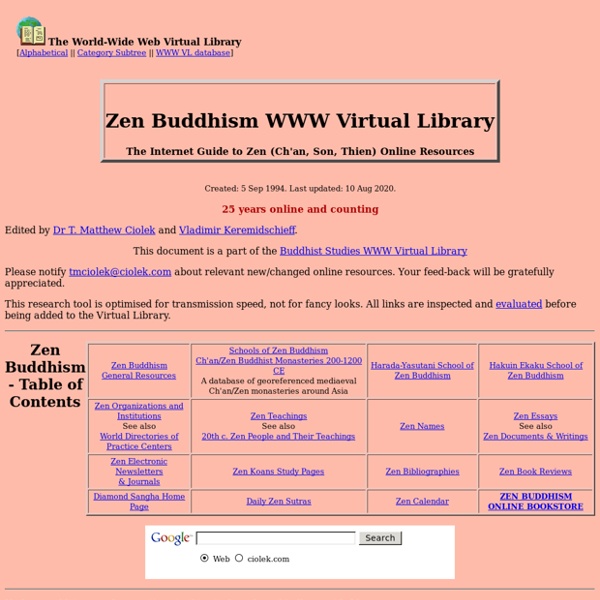 breathe. | zen habits The Five Varieties of Zen An old Zen student called Hsiang-yen went to dokusan with Kuei-shan Ling-yu (771-853), the T'ang dynasty master, and Kuei-shan gave him a koan, of which over and over he was unable to see into it's mysteries. Hsiang-yen decided that it was all too much for him and he would surrender. He went away and found a sacred site, the grave of the Sixth Patriarch of Chinese Zen, Hui-neng, and maintained it as a shrine. Day in and day out he had no thought about the world except his sweeping. Then one day, sweeping away, he swept a pebble into a bamboo grove beside the shrine. The pebble hit a piece of hollow bamboo and went "ping!" Among the various types of Zen presented to the people of today there are some which are profound and some shallow, some that lead to Enlightenment and some that do not. (PLEASE CLICK) GASSHO(PLEASE CLICK)CLICK HERE FOR ENLIGHTENMENT ON THE RAZOR'S EDGE Source: "The Three Pillars of Zen", Kapleau, Roshi Phillip, pgs.44-52.

Japanese Zen Buddhist Philosophy 1. The Meaning of the Term Zen The designation of this school of the Buddha-Way as Zen, which means sitting meditation, is derived from a transliteration of the Chinese word Chán. Because the Chinese term is in turn a transliteration of the Sanskrit term dhyāna, however, Zen owes its historical origin to early Indian Buddhism, where a deepened state of meditation, called samādhi, was singled out as one of the three components of study a Buddhist was required to master, the other two being an observation of ethical precepts (sīla) and an embodiment of nondiscriminatory wisdom (prajñā). 2. There are basically two methods utilized in meditation practice in Zen Buddhism to assist the practitioner to reach the above-mentioned goals, together with a simple breathing exercise known as “observation of breath count” (sūsokukan); one is the kōan method and the other is called “just sitting” (shikan taza), a form of “single act samādhi.” 3. 3.1 The Adjustment of the Body 4. 5. 6. 6.2 Zen’s Nothing

home page H-Buddhism Resources | H-Buddhism In order to have a project on your Network appear on one of the following pages, ensure at least two categories are present when publishing that content: Network Projects and the text of the category exactly as it appears below. Articles and Journals of Interest Articles and Journals of Interest projects include lists of professional publications. Bibliographies Bibliographies of all kinds can be found here. They might include publications in this network's field, specific bibliographies for use in teaching, etc. Conference Notes Find reports from the latest conferences here. Cross-Network Projects Any project that is created in collaboration with at least one other Network can be found here. Discussion Starters Posts and content the editors feel will help spark discussion on the Network can be found here. Dissertations and Theses in Progress Dissertations and Theses in Progress in this Network's field can be found here. Media Archives and Galleries Newsletters and Roundups Professional Development