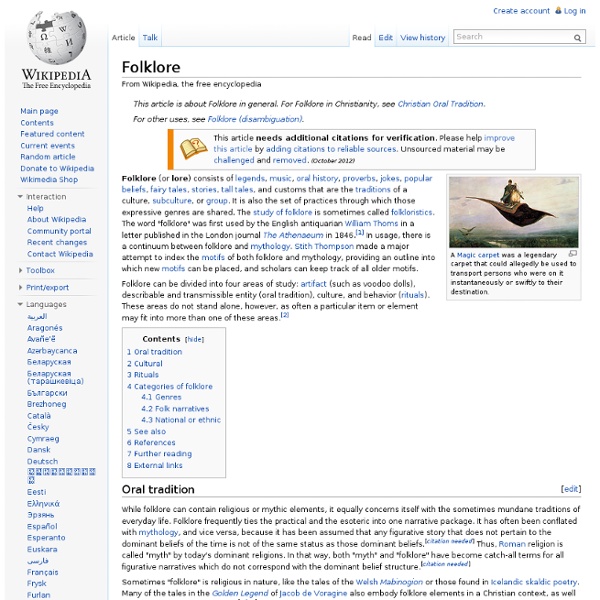 A magic carpet - a carpet that can allegedly transport persons instantaneously or swiftly to a destination. Folklore can be divided[by whom?] into four areas of study: artifacts (such as voodoo dolls)describable and transmissible entity (oral tradition)culturebehavior (rituals) These areas do not stand alone, however, as often a particular item or element may fit into more than one of these areas.[2] Oral tradition[edit] While folklore can contain religious or mythic elements, it equally concerns itself with the sometimes mundane traditions of everyday life. Sometimes "folklore" is religious in nature, like the tales of the Welsh Mabinogion or those found in Icelandic skaldic poetry. "Folktales" is a general term for different varieties of traditional narrative. Contemporary narratives common in the Western world include the urban legend. Vladimir Propp's classic study Morphology of the Folktale (1928) became the basis of research into the structure of folklore texts. Cultural[edit] Related:  Myths & Related Articles

Legend The Brothers Grimm defined legend as folktale historically grounded.[2] A modern folklorist's professional definition of legend was proposed by Timothy R. Tangherlini in 1990:[3] Legend, typically, is a short (mono-) episodic, traditional, highly ecotypified[4] historicized narrative performed in a conversational mode, reflecting on a psychological level a symbolic representation of folk belief and collective experiences and serving as a reaffirmation of commonly held values of the group to whose tradition it belongs." Etymology and origin[edit] Legend is a loanword from Old French that entered English usage circa 1340. In 1613, English-speaking Protestants began to use the word when they wished to imply that an event (especially the story of any saint not acknowledged in John Foxe's Actes and Monuments) was fictitious.[6] Thus, legend gained its modern connotations of "undocumented" and "spurious", which distinguish it from the meaning of chronicle. Christian legenda[edit] See also[edit]

Ancient Sumerians In Ecuador: The Father Crespi Mystery… | Hidden Inca Tours In the Amazonian Ecuadorian region called Morona Santiago there is a very deep cavern, known in Spanish as Cueva de los Tayos (Cave of the Oilbirds). According to some researchers the true discoverer of the huge archaeological treasures of the Cueva de los Tayos was not the Hungarian Juan Moricz, but rather the Salesian priest Carlo Crespi (1891-1982), a native of Milan, Italy. Carlo Crespi, who arrived to the Amazonian Ecuador area of Cuenca in 1927, was able to win the trust of the natives Jibaro, and so they did deliver to him, over decades, hundreds of fabulous archaeological pieces dating back to an unknown time, many of them made of gold or golden, often masterfully carved with archaic hieroglyphs that, to date, no one has been able to decipher. From 1960 Crespi obtained from the Vatican the permission to open a museum in the city of Cuenca, where was located his Salesian mission. We have 2 major tours of Peru and Bolivia left in 2014; see details below: Full details Here

Oedipus In the most well-known version of the myth, Oedipus was born to King Laius and Queen Jocasta. Laius wished to thwart a prophecy, so left him to die on a mountainside. However, the baby was found by shepherds and raised by King Polybus and Queen Merope as their own. Oedipus learned from the oracle at Delphi of the prophecy that he would end up killing his father and marrying his mother but, unaware of his true parentage, believed he was fated to murder Polybus and marry Merope, so left for Thebes. On his way he met an older man and quarrelled, and Oedipus killed the stranger. Continuing on to Thebes, he found that the king of the city (Laius) had been recently killed, and that the city was at the mercy of the Sphinx. Years later, to end a plague on Thebes, Oedipus searched to find who had killed Laius, and discovered that he himself was responsible. Basics of the myth[edit] On the way, Oedipus came to Davlia, where three roads crossed each other. 5th century BC[edit] Later additions[edit]