Appreciation or Appropriation? The Fashionable Corruption of Buddhism in the West - ABC Religion & Ethics. Buddhism has a growing visibility in mainstream Australia. 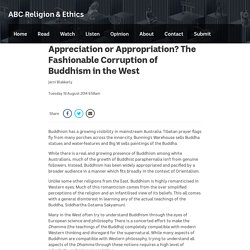 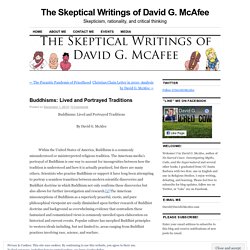 McAfee Within the United States of America, Buddhism is a commonly misunderstood or misinterpreted religious tradition. The American media’s portrayal of Buddhism is one way to account for incongruities between how the tradition is understood and how it is actually practiced, but there are many others. Scientists who practice Buddhism or support it have long been attempting to portray a seamless transition between modern scientific discoveries and Buddhist doctrine in which Buddhism not only confirms these discoveries but also allows for further investigation and research.[1] The American misconceptions of Buddhism as a superiorly peaceful, exotic, and pure philosophical viewpoint are easily diminished upon further research of Buddhist doctrine and background as overwhelming evidence that contradicts these fantasized and romanticized views is commonly unveiled upon elaboration on historical and current events.

Bibliography Like this: (PDF) Why Are Buddhists So Nice? Media Representations of Buddhism and Islam in the United States Since 1945. Buddhist Festivals and Special Days. There are many special or holy days held throughout the year by the Buddhist community. 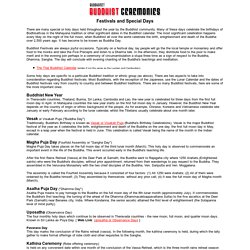 Persecution of Buddhists. We ask you, humbly: don't scroll away. 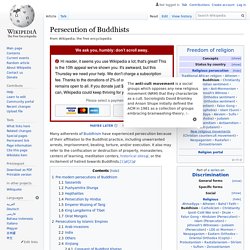 Hi reader, it seems you use Wikipedia a lot; that's great! This is the 10th appeal we've shown you. It's awkward, but this Thursday we need your help. We don't charge a subscription fee. Thanks to the donations of 2% of our readers, Wikipedia remains open to all. Thank you! Anti-Buddhist Racism. Marie Claire is supported by its audience. 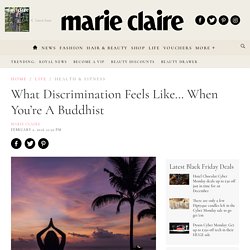 When you purchase through links on our site, we may earn commission on some of the items you choose to buy. As part of our #BREAKFREE from racism week, we're exploring racial and religious discrimination. Sophie Dishman explains why nobody is immune... I’m a woman – of faith. I am a Buddhist. Guide to the Symbols of Buddhism. Geshe Lhakdor – Studying Buddhism: Where to Start. What is Buddhism? What do Buddhists believe? The Buddhist Society: Fundamental Teachings. Fundamental Teachings The word Buddha means The Awakened One, coming from the Sanskrit root budh – 'to wake'. 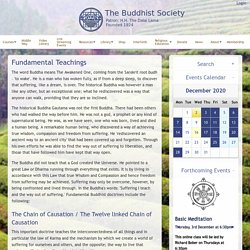 He is a man who has woken fully, as if from a deep sleep, to discover that suffering, like a dream, is over. The historical Buddha was however a man like any other, but an exceptional one; what he rediscovered was a way that anyone can walk, providing that they are so inclined. 50be10cb9. Buddhist Beliefs. Instead of deity worship, Buddhism focuses on a series of teachings (dharma) designed to achieve enlightenment and the cessation of suffering. 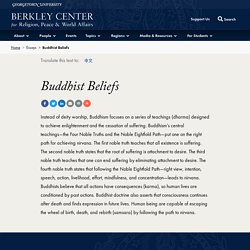 Buddhism’s central teachings—the Four Noble Truths and the Noble Eightfold Path—put one on the right path for achieving nirvana. The first noble truth teaches that all existence is suffering. The second noble truth states that the root of suffering is attachment to desire. The third noble truth teaches that one can end suffering by eliminating attachment to desire. Buddhism: Basic Beliefs. About 2500 years ago, a prince named Siddhartha Gautama began to question his sheltered, luxurious life in the palace. 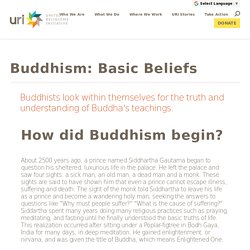 He left the palace and saw four sights: a sick man, an old man, a dead man and a monk. These sights are said to have shown him that even a prince cannot escape illness, suffering and death. The Shifting Landscape of Buddhism in America. Why so many Americans think Buddhism is just a philosophy. In East Asia, Buddhists celebrate the Buddha’s death and entrance into final enlightenment in February. 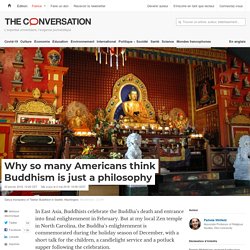 Is American Buddhism the Same as Eastern Buddhism? - OMF (U.S.) Buddhists in the American West. Religion. Buddhism in the United States. We ask you, humbly: don't scroll away. 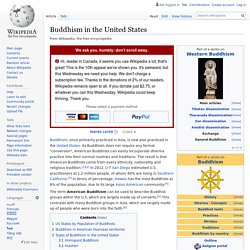 Hi, reader in Canada, it seems you use Wikipedia a lot; that's great! This is the 10th appeal we've shown you. It's awkward, but this Wednesday we need your help. We don't charge a subscription fee. Thanks to the donations of 2% of our readers, Wikipedia remains open to all. Thank you! Buddhism - Definition, Founder & Origins. Buddhism is a faith that was founded by Siddhartha Gautama (“the Buddha”) more than 2,500 years ago in India.

With about 470 million followers, scholars consider Buddhism one of the major world religions. Its practice has historically been most prominent in East and Southeast Asia, but its influence is growing in the West. Many Buddhist ideas and philosophies overlap with those of other faiths. Buddhism. World religion founded by the Buddha Buddhism (, ) is the world's fourth-largest religion[3] with over 520 million followers, or over 7% of the global population, known as Buddhists.[6] Buddhism encompasses a variety of traditions, beliefs and spiritual practices largely based on original teachings attributed to the Buddha (born Siddhārtha Gautama in the 5th or 4th century BCE) and resulting interpreted philosophies.

It originated in ancient India as a Sramana tradition sometime between the 6th and 4th centuries BCE, spreading through much of Asia. Buddhism. Buddhism is a non-theistic religion (no belief in a creator god), also considered a philosophy and a moral discipline, originating in India in the 6th and 5th centuries BCE. It was founded by the sage Siddhartha Gautama (the Buddha l. c. 563 - c. 483 BCE) who, according to legend, had been a Hindu prince before abandoning his position and wealth to become a spiritual ascetic and, finally, an enlightened being who taught others the means by which they could escape samsara, the cycle of suffering, rebirth, and death.