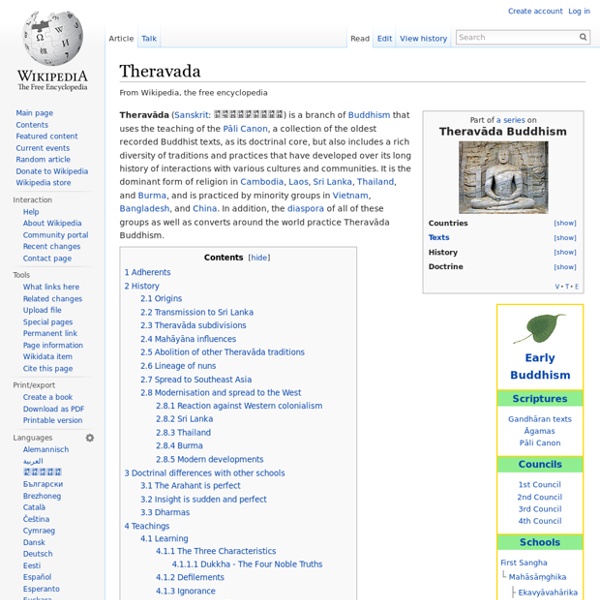 Theravāda (Sanskrit: स्थविरवाद) is a branch of Buddhism that uses the teaching of the Pāli Canon, a collection of the oldest recorded Buddhist texts, as its doctrinal core, but also includes a rich diversity of traditions and practices that have developed over its long history of interactions with various cultures and communities. It is the dominant form of religion in Cambodia, Laos, Sri Lanka, Thailand, and Burma, and is practiced by minority groups in Vietnam, Bangladesh, and China. In addition, the diaspora of all of these groups as well as converts around the world practice Theravāda Buddhism. Adherents[edit] Theravāda Buddhism is followed by various countries and people around the globe, and are: Today, Theravāda Buddhists, otherwise known as Theravadins, number over 150 million worldwide, and during the past few decades Theravāda Buddhism has begun to take root in the West[a] and in the Buddhist revival in India. History[edit] Origins[edit] Transmission to Sri Lanka[edit] [edit] [edit] Related:  Buddhist Psychology • Wikipedia A

Thai Forest Tradition The Thai Forest Tradition is a tradition of Buddhist monasticism within Thai Theravada Buddhism. Practitioners inhabit remote wilderness and forest dwellings as spiritual practice training grounds. Maha Nikaya and Dhammayuttika Nikaya are the two major monastic orders in Thailand that have forest traditions. The Thai Forest Tradition emphasizes direct experience through meditation practice and strict adherence to monastic rules (vinaya) over scholastic Pali Tipitaka study. Adherents model their practice and lifestyle on those of the Buddha and his early disciples. Perhaps its most widely known representative was Ajahn Chah and in the UK Ajahn Sumedho. Origins[edit] [edit] In Thailand, Buddhism plays a central role in society. Teachers[edit] In the early 1900s, Thailand's Ajahn Sao Kantasilo Mahathera and his student, Mun Bhuridatta led the Forest Tradition revival movement. Pali Canon[edit] In the Andhakavinda Sutta:[7] 'Come, friends, dwell in the wilderness. In the Dantabhumi Sutta:[8]

Gautama Buddha The word Buddha means "awakened one" or "the enlightened one". "Buddha" is also used as a title for the first awakened being in an era. In most Buddhist traditions, Siddhartha Gautama is regarded as the Supreme Buddha (Pali sammāsambuddha, Sanskrit samyaksaṃbuddha) of our age.[note 6] Gautama taught a Middle Way between sensual indulgence and the severe asceticism found in the Sramana (renunciation) movement common in his region. He later taught throughout regions of eastern India such as Magadha and Kośala. Gautama is the primary figure in Buddhism and accounts of his life, discourses, and monastic rules are believed by Buddhists to have been summarized after his death and memorized by his followers. Historical Siddhārtha Gautama[edit] Ancient kingdoms and cities of India during the time of Buddha. Scholars are hesitant to make unqualified claims about the historical facts of the Buddha's life. The times of Gautama's birth and death are uncertain. Traditional biographies[edit]

Vipassana Meditation Website Samadhi (Buddhism) In Buddhism, samādhi (Pali / Sanskrit: समाधि) is mental concentration or composing the mind. It is one of three divisions of the Noble Eightfold Path. The term samādhi is common to the Sanskrit and Pali languages. Common Chinese terms for samādhi include the transliterations sanmei (三昧) and sanmodi (三摩地 or 三摩提), as well as the translation of the term literally as ding (定 "fixity"). Kumarajiva's translations typically use sanmei (三昧), while the translations of Xuanzang tend to use ding (定 "fixity"). Upon development of samādhi, one's mind becomes purified of defilements, calm, tranquil, and luminous. In the noble eightfold path, "right concentration" (samma-samādhi, S. samyak-samādhi) is the eighth path factor. In AN IV.41,[2] the Buddha identifies four types of concentration development, each with a different goal: In the Indian Mahāyāna traditions samādhi is used in the earlier sense, but Likewise, the Samādhirāja Sūtra Learned Audience, in my system Samadhi and Prajna are fundamental.

Tripiṭaka Tripiṭaka (Pali: Tipitaka) is a Pali word meaning Three Baskets. It is the traditional term used by Buddhist traditions to describe their various canons of scriptures.[1] The expression Three Baskets originally referred to three receptacles containing the scrolls on which the Buddhist scriptures were originally preserved.[citation needed] Hence, the Tripiṭaka traditionally contains three "baskets" of teachings: a Sūtra Piṭaka (Sanskrit; Pali: Sutta Pitaka), a Vinaya Piṭaka (Sanskrit & Pali) and an Abhidharma Piṭaka (Sanskrit; Pali: Abhidhamma Piṭaka). The three categories[edit] Tripitaka is the three main categories of texts that make up the Buddhist canon. Sutras[edit] The Buddha delivered all His sermons in local language of northern India. Abhidharma[edit] Philosophical and psychological discourse and interpretation of Buddhist doctrine. Vinaya[edit] Rules and regulation of monastic life that range from dress code and dietary rules to prohibition in personal conduct. Mahāsāṃghika[edit]

An Introduction to Buddhism An Introduction to Buddhism To do no evil; To cultivate good; To purify one's mind: This is the teaching of the Buddhas. --The Dhammapada The Buddha was born Siddhartha Gautama, a prince of the Sakya tribe of Nepal, in approximately 566 BC. On the full moon of May, with the rising of the morning star, Siddhartha Gautama became the Buddha, the enlightened one. The Buddha wandered the plains of northeastern India for 45 years more, teaching the path or Dharma he had realized in that moment. Impermanent are all created things; Strive on with awareness.

Mahayana Mahāyāna (Sanskrit: महायान mahāyāna, literally the "Great Vehicle") is one of two (or three, under some classifications) main existing branches of Buddhism and a term for classification of Buddhist philosophies and practice. The Buddhist tradition of Vajrayana is sometimes classified as a part of Mahayana Buddhism, but some scholars may consider it as a different branch altogether.[1] According to the teachings of Mahāyāna traditions, "Mahāyāna" also refers to the path of the Bodhisattva seeking complete enlightenment for the benefit of all sentient beings, also called "Bodhisattvayāna", or the "Bodhisattva Vehicle."[2][note 1] A bodhisattva who has accomplished this goal is called a samyaksaṃbuddha, or "fully enlightened Buddha." A samyaksaṃbuddha can establish the Dharma and lead disciples to enlightenment. The Mahāyāna tradition is the largest major tradition of Buddhism existing today, with 53.2% of practitioners, compared to 35.8% for Theravāda and 5.7% for Vajrayāna in 2010.[3]

The Art of Living: Vipassana Meditation The following text is based upon a talk given by Mr. S.N. Goenka in Berne, Switzerland. Everyone seeks peace and harmony, because this is what we lack in our lives. From time to time we all experience agitation, irritation, dishar­mony. We ought to live at peace with ourselves, and at peace with others. In order to be relieved of our misery, we have to know the basic reason for it, the cause of the suffering. How do we start generating negativity? Now, one way to solve this problem is to arrange that nothing unwanted happens in life, that everything keeps on happening exactly as we desire. In India, as well as in other countries, wise saintly persons of the past studied this problem—the problem of human suffering—and found a solution: if something unwanted happens and you start to react by generating anger, fear or any negativity, then, as soon as possible, you should divert your attention to something else. This solution was helpful; it worked. This presents a practical solution.

NewBuddhist Sutta Pitaka The Sutta Pitaka (suttapiṭaka; or Suttanta Pitaka; cf Sanskrit सूत्र पिटक Sūtra Piṭaka) is the first of the three divisions of the Tipitaka or Pali Canon, the Pali collection of Buddhist writings, the scriptures of Theravada Buddhism. The Sutta Pitaka contains more than 10,000 suttas (teachings) attributed to the Buddha or his close companions. Origins[edit] The scriptures tell how the First Council held shortly after the Buddha's death collected together the discipline (vinaya), and the dharma in five collections. Contents[edit] There are five nikayas (collections) of suttas: Digha Nikaya (dīghanikāya), the "long" discourses.Majjhima Nikaya, the "middle-length" discourses.Samyutta Nikaya (saṃyutta-), the "connected" discourses.Anguttara Nikaya (aṅguttara-), the "numerical" discourses.Khuddaka Nikaya, the "minor collection". Digha Nikaya[edit] This includes The Greater Discourse on the Foundations of Mindfulness, The Fruits of the Contemplative Life, and The Buddha's Last Days. Notes[edit]

The Noble Eightfold Path: The Way to the End of Suffering The essence of the Buddha's teaching can be summed up in two principles: the Four Noble Truths and the Noble Eightfold Path. The first covers the side of doctrine, and the primary response it elicits is understanding; the second covers the side of discipline, in the broadest sense of that word, and the primary response it calls for is practice. In the structure of the teaching these two principles lock together into an indivisible unity called the dhamma-vinaya, the doctrine-and-discipline, or, in brief, the Dhamma. Given this integral unity, it would be pointless to pose the question which of the two aspects of the Dhamma has greater value, the doctrine or the path. To follow the Noble Eightfold Path is a matter of practice rather than intellectual knowledge, but to apply the path correctly it has to be properly understood. — Bhikkhu Bodhi Textual references have been abbreviated as follows: DN .... The search for a spiritual path is born out of suffering. The Range of Suffering