Google. The 25 Best Moments of Acting on Breaking Bad. Ask any fan of Breaking Bad, what is it that makes the show so great and they’ll all come back with different, equally valid, answers: it’s in the writing by Vince Gilligan and company, by turns hilarious, gut-wrenching and jaw-dropping; it’s in the white-knuckle nature of the whole adventure; it’s in the eclectic cast of characters and their gradual transformations that reveal who they truly are in the dark. 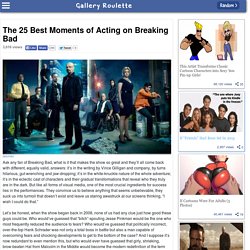 But like all forms of visual media, one of the most crucial ingredients for success lies in the performances. They convince us to believe anything that seems unbelievable, they suck us into turmoil that doesn’t exist and leave us staring awestruck at our screens thinking, “I wish I could do that.” Let’s be honest, when the show began back in 2008, none of us had any clue just how good these guys could be. Who would’ve guessed that “bitch”-spouting Jesse Pinkman would be the one who most frequently reduced the audience to tears? Before we start, though, a couple of side notes.

These 10 Wildlife Creatures Will Give You Nightmares - Page 5 of 5. Cicada Killer Wasps are scary. 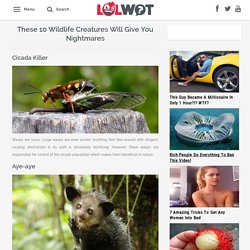 Large wasps are even scarier. Anything that flies around with stingers, causing destruction in its path is absolutely horrifying. However, these wasps are responsible for control of the cicada population which makes them beneficial in nature. 15 Life Hacks That Will Make Your Life A Whole Lot Easier. Barnum effect. A related and more general phenomenon is that of subjective validation.[1] Subjective validation occurs when two unrelated or even random events are perceived to be related because a belief, expectation, or hypothesis demands a relationship. 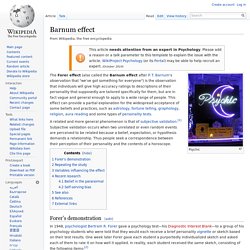 Thus people seek a correspondence between their perception of their personality and the contents of a horoscope. Forer's demonstration[edit] On average, the students rated its accuracy as 4.26 on a scale of 0 (very poor) to 5 (excellent). Only after the ratings were turned in was it revealed that each student had received an identical sketch assembled by Forer from a newsstand astrology book.[2] The sketch contains statements that are vague and general enough to most people. In another study examining the Forer effect, students took the MMPI personality assessment and researchers evaluated their responses. The Forer effect is also known as the "Barnum effect". Repeating the study[edit] Variables influencing the effect[edit] Recent research[edit] The Most Important Article On Psychiatry You Will Ever Read.

Let's begin with a simple drive down a country road, say, I10. 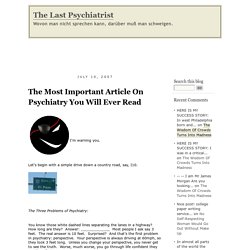 The Three Problems of Psychiatry: You know those white dashed lines separating the lanes in a highway? How long are they? Answer: _____________ Most people I ask say 3 feet. The real answer is 10 feet. Which brings us to the second problem: closed mindedness. Which brings us to the third problem: if you do try and change your perspective, get out and measure those lines, you will be quickly dispatched by a minivan to the face for your lack of faith. The irony of it all was not lost on Paris. Here is a picture of a molecule of Seroquel: It’s a single molecule.

The truth about alcohol, from gin tears to champagne hangovers. I’ll never forget the rubbish party I attended at a youth club when I was a fledgling teen. 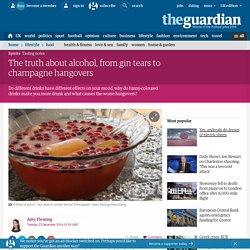 There was music, high jinks and a bowl of fruit punch as big as a duck pond. The youth leaders thought it would be amusing to tell us that the punch was alcoholic. It had an oddly musty taste, which turned out to be brandy flavouring, and sure enough, the leaders stood back and watched the room descend into animalistic chaos. Imaginary inebriation What the youth leaders, who were barely adults themselves, didn’t know was that they’d have been taken in just as easily, had the tables been turned. The alcohol placebo effect doesn’t only make people less inhibited and prone to monkeying around.

Whisky tears, white-wine monsters Everyone has drinks that they avoid because they make them mad or sad. Schwasted Science: How Your Favorite Alcohols Affect You Differently. At one point or another, you’ve probably tricked yourself into thinking different kinds of alcohol make you feel different kinds of drunk. 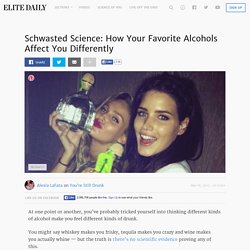 You might say whiskey makes you frisky, tequila makes you crazy and wine makes you actually whine — but the truth is there’s no scientific evidence proving any of this. It’s possible you feel all these different emotions based on a variety of other circumstances, such as how much alcohol you drank and how quickly you drank it, your mood, the context in which you usually drink this specific alcohol and your associations with the specific alcohol. Memory associations in human beings are particularly strong.

For example, maybe your first drink in college was a gin and tonic, so now you always associate gin with a good time. Maybe you drank vodka when your boyfriend dumped you, so now vodka makes you sad and angry. Booze Legends: Debunking the Myths Every Drinker Believes.