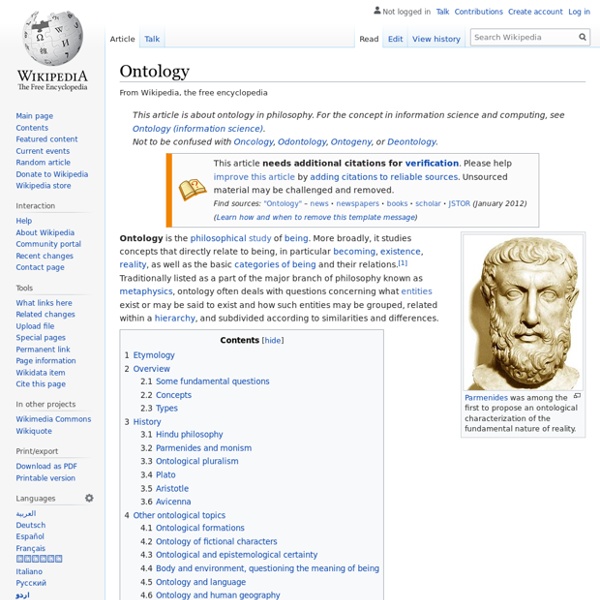 Study of the nature of being, becoming, existence or reality, as well as the basic categories of being and their relations Parmenides was among the first to propose an ontological characterization of the fundamental nature of reality. Etymology[edit] While the etymology is Greek, the oldest extant record of the word itself, the New Latin form ontologia, appeared in 1606 in the work Ogdoas Scholastica by Jacob Lorhard (Lorhardus) and in 1613 in the Lexicon philosophicum by Rudolf Göckel (Goclenius). The first occurrence in English of ontology as recorded by the OED (Oxford English Dictionary, online edition, 2008) came in a work by Gideon Harvey (1636/7–1702): Archelogia philosophica nova; or, New principles of Philosophy. Leibniz is the only one of the great philosophers of the 17th century to have used the term ontology.[6] Overview[edit] Some fundamental questions[edit] Principal questions of ontology include:[citation needed] Concepts[edit] Types[edit] History[edit] Hindu philosophy[edit]

'Metaphysics' Metaphysics is a traditional branch of philosophy concerned with explaining the fundamental nature of being and the world that encompasses it,[1] although the term is not easily defined.[2] Traditionally, metaphysics attempts to answer two basic questions in the broadest possible terms:[3] Ultimately, what is there?What is it like? Prior to the modern history of science, scientific questions were addressed as a part of metaphysics known as natural philosophy. Originally, the term "science" (Latin scientia) simply meant "knowledge". The scientific method, however, transformed natural philosophy into an empirical activity deriving from experiment unlike the rest of philosophy.

What is Consciousness? We become consciousness when there is an awareness of movement, balance and clarity in the relationships between all these directions, giving rise to the experience of presence and an awareness of the core Self, which is whole. Life is experienced as a field of awareness and our relationships become interactions with consciousness within those fields. Modern quantum physicists are now demonstrating the truth of this ancient wisdom as they delve ever deeper into the mystery of how life is created. The relationship of the creative expression of our essence in co-creation with the Divine can be most fully be experienced through play, community, love, presence and an awareness of all Life. We can begin to understand how we synthesize structures of meaning or patterns, both old and new, through the experiences of different learning environments that open us up to the feeling of belonging and of connection, of being home.

en.m.wiktionary English[edit] Etymology[edit] Originally Latin ontologia (1606, Ogdoas Scholastica, by Jacob Lorhard (Lorhardus)), from Ancient Greek ὤν (ṓn, “on”), present participle of εἰμί (eimí, “being, existing, essence”) + λόγος (lógos, “account”). Spinal cord The spinal cord is a long, thin, tubular structure made up of nervous tissue, that extends from the medulla oblongata in the brainstem to the lumbar region of the vertebral column. It encloses the central canal of the spinal cord that contains cerebrospinal fluid. The brain and spinal cord together make up the central nervous system (CNS). 'Stoicism' School of Hellenistic Greek philosophy Stoicism is a school of Hellenistic philosophy which was founded by Zeno of Citium, in Athens, in the early 3rd century BC. Stoicism is a philosophy of personal ethics informed by its system of logic and its views on the natural world. According to its teachings, as social beings, the path to eudaimonia (happiness) for humans is found in accepting the moment as it presents itself, by not allowing oneself to be controlled by the desire for pleasure or fear of pain, by using one's mind to understand the world and to do one's part in nature's plan, and by working together and treating others fairly and justly.

Brainwaves Brainwaves There is extensive research into the anatomy and functions of the brain. Studies into the the frequencies of brainwaves have led to the classification of various conscious states. Here is a little technical stuff to summarize what happens inside the brain during altered states of consciousness. Normal waking consciousness: Low amplitude beta wave, or beta rhythms above 12 Hertz (12 transitions or cycles per second) includes multiple and varying frequencies when we are awake. Higher Mental Activity, Perception and Consciousness: Gamma waves, 40 Hertz (Hz), can often be between 26 and upwards of 70 Hz. en.m.wikipedia Sefirot (; Hebrew: סְפִירוֹת səp̄îrôṯ), meaning emanations, are the 10 attributes/emanations in Kabbalah, through which Ein Sof (The Infinite) reveals Himself and continuously creates both the physical realm and the chain of higher metaphysical realms (Seder hishtalshelus). The term is alternatively transliterated into English as sephirot/sephiroth, singular sefirah/sephirah etc. Alternative configurations of the sefirot are given by different schools in the historical development of Kabbalah, with each articulating different spiritual aspects.

Dura mater Dura mater, or dura, is a thick membrane made of dense irregular connective tissue that surrounds the brain and spinal cord. It is the outermost of the three layers of membrane called the meninges that protect the central nervous system. The other two meningeal layers are the arachnoid mater and the pia mater. The dura surrounds the brain and the spinal cord and is responsible for keeping in the cerebrospinal fluid. It is derived from neural crest cells.[1] Structure[edit]

Ontology - The pre-methodological question that asks how we perceive the social world. It is based on the argument that, because of our gender, age, upbringing and life experience, we all view those around us in unique ways. This fundamental fact has implications for our ability to achieve research neutrality, not only in the conclusions we draw, but also in the topics we choose to study, the way we go about the data collection task, and what we see, hear and interpret during the time of analysis and write-up. 'No research or story can be ontologically neutral' (Mason, 2002, p. 154). Found in: Davies, M. (2007) Doing a Successful Research Project: Using Qualitative or Quantitative Methods. Basingstoke, Hampshire, England, United Kingdom: Palgrave Macmillan. ISBN: 9781403993793. by raviii Jul 31