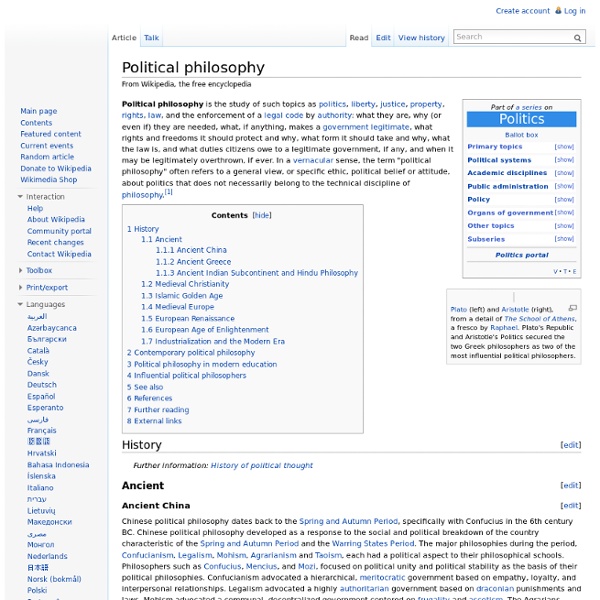 Plato (left) and Aristotle (right), from a detail of The School of Athens, a fresco by Raphael. Plato's Republic and Aristotle's Politics secured the two Greek philosophers as two of the most influential political philosophers. Political philosophy is the study of topics such as politics, liberty, justice, property, rights, law, and the enforcement of a legal code by authority: what they are, why (or even if) they are needed, what, if anything, makes a government legitimate, what rights and freedoms it should protect and why, what form it should take and why, what the law is, and what duties citizens owe to a legitimate government, if any, and when it may be legitimately overthrown, if ever. In a vernacular sense, the term "political philosophy" often refers to a general view, or specific ethic, political belief or attitude, about politics that does not necessarily belong to the technical discipline of philosophy. History[edit] Ancient Philosophies[edit] Ancient China[edit] Saint Augustine

Jean-Jacques Rousseau Jean-Jacques Rousseau (/ruːˈsoʊ/;[1] French: [ʒɑ̃ʒak ʁuso]; 28 June 1712 – 2 July 1778) was a Genevan philosopher, writer, and composer of the 18th century. His political philosophy influenced the French Revolution as well as the overall development of modern political, sociological, and educational thought. Biography[edit] Youth[edit] Philosophy Philosophy is the study of general and fundamental problems, such as those connected with reality, existence, knowledge, values, reason, mind, and language.[1][2] Philosophy is distinguished from other ways of addressing such problems by its critical, generally systematic approach and its reliance on rational argument.[3] In more casual speech, by extension, "philosophy" can refer to "the most basic beliefs, concepts, and attitudes of an individual or group".[4] The word "philosophy" comes from the Ancient Greek φιλοσοφία (philosophia), which literally means "love of wisdom".[5][6][7] The introduction of the terms "philosopher" and "philosophy" has been ascribed to the Greek thinker Pythagoras.[8] Areas of inquiry Philosophy is divided into many sub-fields. These include epistemology, logic, metaphysics, ethics, and aesthetics.[9][10] Some of the major areas of study are considered individually below.

City-state Independent or autonomous entity whose territory consists of a city A city-state is a sovereign state, also described as a type of small independent country, that usually consists of a single city and its dependent territories. Historically, this included cities such as Rome, Athens, Carthage,[1] and the Italian city-states during the Renaissance. As of 2019[update], only a handful of sovereign city-states exist, with some disagreement as to which are city-states. A great deal of consensus exists that the term properly applies currently to Monaco, Singapore, and Vatican City.

Classical republicanism Classical republicanism (also known as civic humanism)[1] is a form of republicanism developed in the Renaissance inspired by the governmental forms and writings of classical antiquity, especially such classical writers as Aristotle, Polybius, and Cicero. Classical republicanism is built around concepts such as civil society, civic virtue and mixed government. Development[edit] Socrates Socrates (/ˈsɒkrətiːz/;[2] Greek: Σωκράτης [sɔːkrátɛːs], Sōkrátēs; 470/469 – 399 BC)[1] was a classical Greek (Athenian) philosopher credited as one of the founders of Western philosophy. He is an enigmatic figure known chiefly through the accounts of classical writers, especially the writings of his students Plato and Xenophon and the plays of his contemporary Aristophanes. Plato's dialogues are among the most comprehensive accounts of Socrates to survive from antiquity, though it is unclear the degree to which Socrates himself is "hidden behind his 'best disciple', Plato".[3]

Social contract In moral and political philosophy, the social contract or political contract is a theory or model, originating during the Age of Enlightenment, that typically addresses the questions of the origin of society and the legitimacy of the authority of the state over the individual.[1] Social contract arguments typically posit that individuals have consented, either explicitly or tacitly, to surrender some of their freedoms and submit to the authority of the ruler or magistrate (or to the decision of a majority), in exchange for protection of their remaining rights. The question of the relation between natural and legal rights, therefore, is often an aspect of social contract theory. The Social Contract (Du contrat social ou Principes du droit politique) is also the title of a 1762 book by Jean-Jacques Rousseau on this topic. Overview[edit] Thomas Hobbes famously said that in a "state of nature" human life would be "solitary, poor, nasty, brutish, and short". History[edit]

Justice Concept of moral fairness and administration of the law Harmony[edit] In his dialogue Republic, Plato uses Socrates to argue for justice that covers both the just person and the just City State. Real freedom Real freedom is a term coined by the political philosopher and economist Philippe Van Parijs. It expands upon notions of negative freedom by incorporating not simply institutional or other constraints on a person's choices, but also the requirements of physical reality, resources and personal capacity. To have real freedom, according to Van Parjis, an individual must: 1. not be prevented from acting on their will (i.e. they must have traditional negative freedom); and