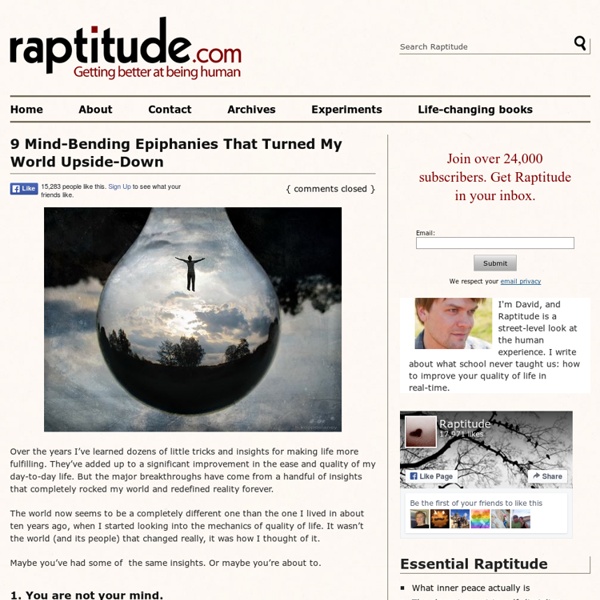 Over the years I’ve learned dozens of little tricks and insights for making life more fulfilling. They’ve added up to a significant improvement in the ease and quality of my day-to-day life. But the major breakthroughs have come from a handful of insights that completely rocked my world and redefined reality forever. The world now seems to be a completely different one than the one I lived in about ten years ago, when I started looking into the mechanics of quality of life. It wasn’t the world (and its people) that changed really, it was how I thought of it. Maybe you’ve had some of the same insights. 1. The first time I heard somebody say that — in the opening chapter of The Power of Now — I didn’t like the sound of it one bit. I see quite clearly now that life is nothing but passing experiences, and my thoughts are just one more category of things I experience. If you can observe your thoughts just like you can observe other objects, who’s doing the observing? 2. Of course! 3. 4. 5.

Handbook for a New Paradigm Volume One Handbook for the New Paradigm - Volume One [ Mid-Advanced Perspective Transitional Material ] Other Links: Volume Two Volume Three Looking for Material More Advanced Than The Handbooks? See: Matrix V-Quest of the Spirit - The Ultimate Frontier This Internet Edition of the Handbook for the New Paradigm was kindly provided by George Green upon my request in order to provide the whole planet with the opportunity to view the material. It was posted back on 21 October 1999 as a service for those interested in the material. Good for those people just coming from religious belief systems and seeking to expand beyond their current perspective. Note: The Handbook for the New Paradigm is composed of several volumes of messages purported to be telepathically received from an advanced Ultra-Dimensional race by George Green. You are obviously expected to view this material with discernment ,evaluate it on your own terms and in accordance with your experience.

Daniel Smith I believe that people are mostly at different levels of awareness or consciousness in their lives and that we look at life through our own set of glasses. Most of us are functioning based on ideas and theories that have been passed on from generation to generation and so we are seeing the world through our ideas and not necessarily looking at reality. As a species we have advanced tremendously in technology and commerce, but one thing we have neglected to advance in is consciousness, the ability to be awake in the world. Today’s society has become extremely efficient at doing things with little or no awareness, we just run on auto pilot. ParadigmOfComplexity The last few decades have seen the emergence of a growing body of literature devoted to a critique of the so-called “old” or “Cartesian-Newtonian” paradigm which, in the wake of the prodigious successes of modern natural science, came to dominate the full range of authoritative intellectual discourse and its associated worldviews. Often coupled with a materialistic, and indeed atomistic, metaphysics, this paradigm has been guided by the methodological principle of reductionism. The critics of reductionism have tended to promote various forms of holism, a term which, perhaps more than any other, has served as the rallying cry for those who see themselves as creators of a “new paradigm.” At the forefront of such a challenge, and in many ways the herald of the new paradigm, is the relatively new movement of transpersonal psychology. In taking seriously such experiences, transpersonal theory has been compelled to transcend the disciplinary boundaries of mainstream psychology. C.

Excerpts from "How to be Perfect" by Ron Padgett Wednesday May 30, 2012 Listen Download E-mail Share Excerpts from "How to be Perfect" by Ron Padgett Get some sleep. Dalai Lama tells his Facebook friends that religion "is no longer adequate" Well, he'd hardly be the first Buddhist to say something like this. From what I've read, there are already lots of Buddhists, and historical Buddhist movements in various countries, who are atheistic and who prefer to return to Buddhism's roots as a kind of self-help, personal psychological and philosophical system—and yes, I realize I'm hugely oversimplifying that ideological stripe of Buddhism—and that's fine. And if this helps the world be a better place, cool. I'm all for it.

A Generation of Men Raised by Women “We’re a generation of men raised by women. I’m wondering if another woman is really the answer we need.” This comment, made by the Tyler Durden character in the movie Fight Club, is one of the most memorable lines of that film and has oft been repeated and discussed. It’s sticking power is surely due to the way it resonated with many men–how it so succinctly summed up their life’s experience. Products of divorced parents, single mothers, or fathers who spent more time at work than at home, these men lacked a vital example of manhood growing up.

10 Most Brilliant Social Psychology Experiments Ten of the most influential social psychology experiments. “I have been primarily interested in how and why ordinary people do unusual things, things that seem alien to their natures.Why do good people sometimes act evil?Why do smart people sometimes do dumb or irrational things?” –Philip Zimbardo Like eminent social psychologist Professor Philip Zimbardo (author of The Lucifer Effect: Understanding How Good People Turn Evil), I’m also obsessed with why we do dumb or irrational things. The answer quite often is because of other people – something social psychologists have comprehensively shown.

The Octarine argument. Yes, yes - colour corresponds with real properties. But colour itself is not in the external physical world. It's like those cases where a picture from a telescope or a microscope is given colours artificially to help show up the different substances. The colours are not real, but they do help you understand more about what you're seeing. It turns out that all colour is more or less like that -yes, it's helpful, but that doesn't mean it directly reflects the physical reality. The Purpose of Life, Revealed Last week I ran into a few online discussions about those big, big questions that often come up in late-night conversations: Why are we here? What is our purpose? Strictly speaking, as members of the human species we do have a purpose. But we didn’t choose it, and it might not be us who stands to benefit from it. In fact, you might find our purpose quite upsetting.

15 Books You Should Have Read in 2010 Image by Jane Mount, Courtesy 20x200 Yes, we read Freedom this year and yes, it was good. As Esquire put it, it “was one great slab of a book, at a time when most books have given up on greatness.” But there were other books in 2010, books that had to compete for our ever more challenged attention spans and won. So we asked a few members of the GOOD team & some of our good colleagues which book made their best list this past year. (And since discovering something you might have missed is one of the great pleasures of reading, no selections were disqualified for having been published prior to 2010).

The Case Against Buying Christmas Presents Post written by Leo Babauta. I love Christmas. I love the snow-themed everything, even when I was living on tropical Guam, and Santa and elves and reindeer and snowmen and candy canes. William James Be not afraid of life. Believe that life is worth living, and your belief will help create the fact. William James (11 January 1842 – 26 August 1910) was a pioneering American psychologist and philosopher. He developed the philosophical perspective known as radical empiricism, and wrote influential books on the science of psychology, the psychology of religious experience and mysticism, and the philosophy of pragmatism.

Slow design Slow Design is a branch of the Slow Movement, which began with the concept of Slow Food, a term coined in contrast to fast food. As with every branch of the Slow Movement, the overarching goal of Slow Design is to promote well being for individuals, society, and the natural environment. Slow Design seeks a holistic approach to designing that takes into consideration a wide range of material and social factors as well as the short and long term impacts of the design. Origin and meaning[edit] Slow Design refers to the goals and approach of the designer, rather than the object of the design. In this way a Slow Design approach can be used within any design field.

Need Some Motivation Right Now? Read This IMMEDIATELY If you’re in desperate need of some motivation, we’re going to fix that problem, right here, right now. Prepare yourself. WARNING: I’m going to swear and yell a little in this post. Desperate times call for desperate measures.