History of Philosophy without any gaps 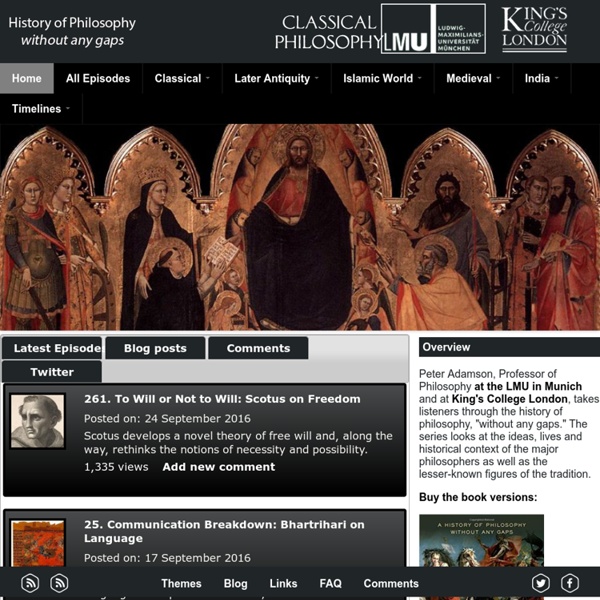 Logic and Ontology 1. Introduction Both logic and ontology are important areas of philosophy covering large, diverse, and active research projects. These two areas overlap from time to time and problems or questions arise that concern both. Symbolic Logic Symbolic logic is the method of representing logical expressions through the use of symbols and variables, rather than in ordinary language. This has the benefit of removing the ambiguity that normally accompanies ordinary languages, such as English, and allows easier operation. There are many systems of symbolic logic, such as classical propositional logic, first-order logic and modal logic.

We're Underestimating the Risk of Human Extinction Unthinkable as it may be, humanity, every last person, could someday be wiped from the face of the Earth. We have learned to worry about asteroids and supervolcanoes, but the more-likely scenario, according to Nick Bostrom, a professor of philosophy at Oxford, is that we humans will destroy ourselves. Bostrom, who directs Oxford's Future of Humanity Institute, has argued over the course of several papers that human extinction risks are poorly understood and, worse still, severely underestimated by society. Some of these existential risks are fairly well known, especially the natural ones.

Open Culture Advertisment Take online courses from the world’s top universities for free. Below, you will find 1,700 free online courses from universities like Yale, MIT, Harvard, Oxford and more. Our site also features collections of Online Certificate Programs and Online Degree & Mini-Degree Programs. The Weirdest Unsolved Mysteries of World War II Just yesterday I saw the Ancient Aliens (credibility plummeting now?) that covered this and the main eyewitness they interviewed had a similar story to your understanding of the issue. I don't know what to believe, but if our military couldn't take out a weather balloon with anti-aircraft fire, that would be bad. I first read everything I could find about the incident some decades ago before the internet. I read about it again perhaps ten years ago. Here's the odd thing; the glib explanation provided here seems to have been generated within the last ten years, because in that time I've seen this simplistic explanation that it was weather balloons and itchy trigger fingers spring up.

Descartes, Rene [Internet Encyclopedia of Philosophy] René Descartes is often credited with being the “Father of Modern Philosophy.” This title is justified due both to his break with the traditional Scholastic-Aristotelian philosophy prevalent at his time and to his development and promotion of the new, mechanistic sciences. His fundamental break with Scholastic philosophy was twofold. First, Descartes thought that the Scholastics’ method was prone to doubt given their reliance on sensation as the source for all knowledge. Second, he wanted to replace their final causal model of scientific explanation with the more modern, mechanistic model. Descartes attempted to address the former issue via his method of doubt. Science and Nonduality In this article standup philosopher Tim Freke articulates the nature of ‘paralogical’ thinking, which is the foundation of the philosophy and practices he shares to guide people to a ‘deep awake’ state. The need for paralogical thinking arises from an important insight. Life is profoundly paradoxical. I’ve already mentioned in passing the paradox that on the surface of life we live in a world of separate things, but at the depths all is one. At first such spiritual paradoxes can sound like mystical mumbo jumbo.

A tribute to Turing, the father of modern computing “The past is a foreign country—they do things differently there.” It’s a saying that rings especially true in the world of technology. But while innovating requires us to focus on the future, there are times when it’s important to look back. Today—the 100th anniversary of Alan Turing’s birth—is one such moment. Statue of Alan Turing at Bletchley Park George Berkeley 1. Life and philosophical works Berkeley was born in 1685 near Kilkenny, Ireland. After several years of schooling at Kilkenny College, he entered Trinity College, in Dublin, at age 15. 10 Mind-Blowing Theories That Will Change Your Perception Of The World by Anna LeMind Reality is not as obvious and simple as we like to think. Some of the things that we accept as true at face value are notoriously wrong. Scientists and philosophers have made every effort to change our common perceptions of it. The 10 examples below will show you what I mean. 1.