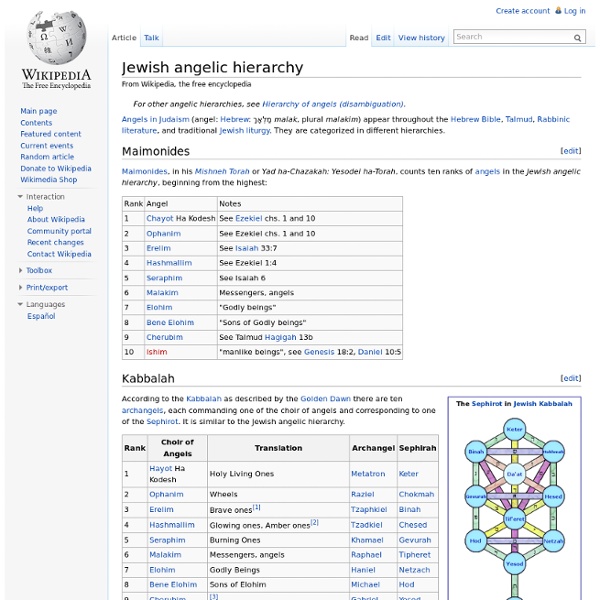 Angels in Judaism (angel: Hebrew: מַלְאָךְ‎ mal’āḵ, plural mal’āḵīm) appear throughout the Hebrew Bible, Talmud, Rabbinic literature, and traditional Jewish liturgy. They are categorized in different hierarchies. Maimonides[edit] Maimonides, in his Mishneh Torah or Yad ha-Chazakah: Yesodei ha-Torah, counts ten ranks of angels in the Jewish angelic hierarchy, beginning from the highest: Kabbalah[edit] According to the Golden Dawn's interpretation of the Kabbalah, there are ten archangels, each commanding one of the choirs of angels and corresponding to one of the Sephirot. See also[edit] Hermetic Order of the Golden Dawn References[edit] External links[edit]

e2fc45c0f67df98409ee4f2c9da31f28 Ancient Days:: Comparison of Genesis with Creation Stories of the Ancient Near East :: by David Livingston One Viewpoint Many professors in colleges, universities and seminaries today agree with the following ideas and teach them to their students. This is one reason young people who have had a strong religious faith lose it when they go to college. For many centuries, Jewish and Christian theologians agreed that the accounts of the world's origin given in Genesis were not only inspired by God, but owed nothing to any other scriptures. These authors are probably correct that all but Bible believers (fundamentalists) have abandoned this view. The Genesis Creation Story does not owe anything to the creation myths of Egypt and Mesopotamia. The first account of Creation (Genesis 1:1-2:31) was composed at Jerusalem soon after the return from the Babylonian Exile (500 BC). This interpretation of Genesis 1 and 2 agrees with many scholars. Out of these sources (Genesis through Numbers) they formed what is called the "Priestly History." Religion has evolved. Another Viewpoint Memphite Theology A.R. I.

nine grades of angels The world tree or mountain are conditional symbols of a centre where there is the global vertical axis, that in aggregate with a horizontal surface of the world forms coordinates of world space. Namely vertical global axis corresponds with the central numerological number 5 which is in the centre of magic square of nine numbers in a context of numerology, and other numbers of the magic square symbolize horizontal measurements of the world. Horizontal and vertical measurements of the world are congruous, namely vertical axis has numerical gradation which are projections of numbers on a horizontal surface. Accordingly physiognomy of human facial traits correspond with numerological numbers on different coordinates which designate versatile phenomena of world around, but which coincide in features of a human face. The following page compares physiognomy of a human face to circles of the universe in the Divine Comedy of Dante Alighieri. previous - upwards - following

Ancient Days :: Who Were the Sons of God in Genesis 6? :: by David Livingston In Genesis 6:1-8 we read about some persons who may be a pre-Flood link between the Bible and the cultures of the ancient Near East. They are the "sons of the gods." The biblical reference to them should have some relationship with historical fact. If so, we should be able to lift these early chapters of Genesis out of what may be to some a foggy mysticism, and make connections with extra-biblical historical accounts. Suggested Meanings for the "sons of god" Who actually were the "sons of god?" Another interpretation is that they were the sons of Seth, the godly line. The third possibility is that of rabbinical Jewish interpretation. Perhaps a combination of the first and third is the best explanation. A New Interpretation A new interpretation has been suggested by Meredith Kline (in The Westminster Theological Journal, May 1962). Thus, the king is divine, he is god, and manifested himself as such especially on the New Year Festival. Divine Kingship What is it? How Divine Kingship Works 1.