Critique of the Documentary Theory. By Fr. 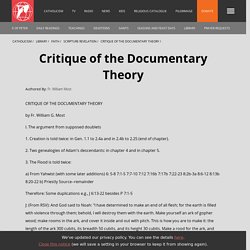 The Ten Minute Bible Hour: Coptic Christianity. The Papal Encyclicals Online. Early Christian Chronology and the Origins of the Christmas Date QL 39744797. FAMULI VESTRAE PIETATIS1. A Chronology of the Resurrection Appearances - Community in Mission. When we encounter the resurrection accounts in the New Testament, we face a challenge in putting all the pieces together in such a way that the sequence of events flows in logical order. 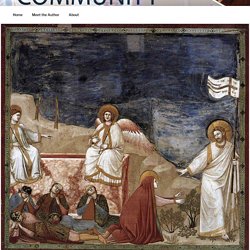 This is due to the fact that no one Gospel presents all or even most of the information. Some of the accounts seem to conflict. I have opined before (HERE) that these apparent conflicts are usually not in fact true conflicts. Good Friday & the Hidden Meanings of "Golgotha": Whose Skull Was It? The Mysterious Nephilim of the Bible (Aliens? Angels? Or Something Else?) – Jimmy Akin’s Mysterious World – Jimmy Akin. Genesis 6 mentions a group called the Nephilim and their identity has puzzled scholars for thousands of years. 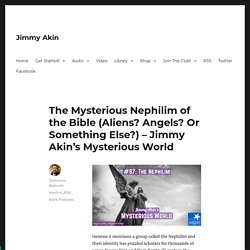 Jimmy Akin and Dom Bettinelli explore the theories that they are angels or aliens or even something else, then ask what Genesis 6 is trying to say. Links for this episode: Please spread the word about the podcast. Leave us a review on Apple Podcasts! Biblical and Patristic Evidence for Mary's “In Partu” Virginity. “Mary ‘remained a virgin in conceiving her Son, a virgin in giving birth to him, a virgin in carrying him, a virgin in nursing him at her breast, always a virgin.’ 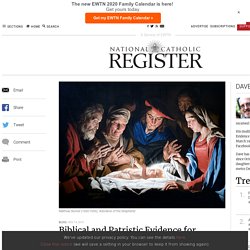 With her whole being she is ‘the handmaid of the Lord.’’ (CCC 510) Mary’s perpetual virginity is a de fide dogma of the Catholic faith (see the revised version of Fundamentals of Catholic Dogma by Ludwig Ott; Baronius Press, 2018; edited by Robert Fastiggi, p. 222). Dr. Mark Spencer on Reforming Thomism and Integrating Palamism. St. John Paul II’s Rapprochement with Science* – The American Catholic. Menu St. 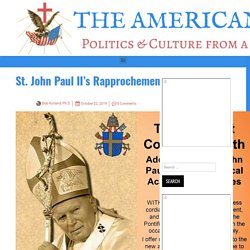 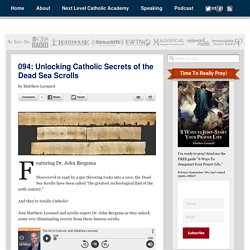 John Bergsma Discovered in 1946 by a guy throwing rocks into a cave, the Dead Sea Scrolls have been called “the greatest archeological find of the 20th century.” And they’re totally Catholic! Join Matthew Leonard and scrolls expert Dr. John Bergsma as they unlock some very illuminating secrets from these famous scrolls. St Cyril’s Third Letter to Nestorius « Orthodox Unity (Orthodox Joint Commission) St Cyril’s Third Letter to Nestorius To the Most Pious and Devout fellow minister Nestorius Cyril and the co-assembled Synod in Alexandria from out of the Province of Egypt, greeting in the Lord. 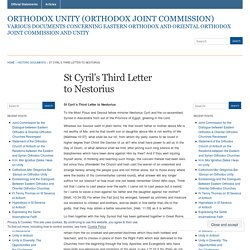 Whereas our Saviour saith in plain terms, He that loveth father or mother above Me is not worthy of Me, and he that loveth son or daughter above Me is not worthy of Me [Matthew 10:37]: what shall be our lot, from whom thy piety claims to be loved in higher degree than Christ the Saviour of us all? Who shall have power to aid us in the Day of Doom, or what defence shall we find, after prizing such long silence at the blasphemies which have been done against Him by thee? We have subjoined to this our letter the things which thou must hold and teach and those from which thou must abstain: for this is the Faith of the Catholic and Apostolic Church, to which all the Orthodox Bishops throughout the West and East adhere. 1. 2. 3. 4. My 1Peter5 Article on Filioque: Please read and comment! Dear friends, I wrote an article for One Peter Five on Filioque, which they agreed to publish. 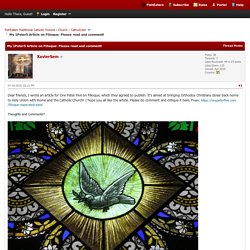 It's aimed at bringing Orthodox Christians closer back home to Holy Union with Rome and the Catholic Church! I hope you all like the article. Please do comment and critique it here. From: Thoughts and Comments? Patristics. St Cyril’s Third Letter to Nestorius « Orthodox Unity (Orthodox Joint Commission) Adam, Eve, and Anthropology. The Christian faith is sometimes called a "historical religion". 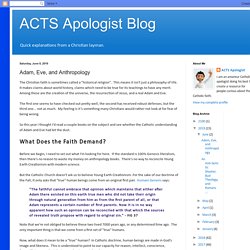 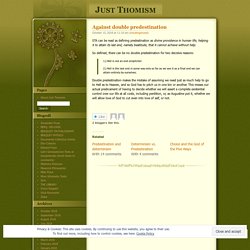 So defined, there can be no double predestination for two decisive reasons: 1.) Hell is not an end simpliciter.2.) Hell is the last end in some way only so far as we see it as a final end we can attain entirely by ourselves. Double predestination makes the mistake of assuming we need just as much help to go to Hell as to Heaven, and so God has to pitch us in one bin or another. SixDay Science. A Prophetic Sketch of the Messiah - Part 4: From the Rising of the Sun to its Setting. In the previous parts we have looked at the timing of the coming of the Messiah, some of the accomplishments of his life, and the manner of his death.

Now we will look at what is prophesied concerning the lasting effects of his ministry. What sort of things would change as a result of the coming of the Messiah? All Nations Shall Believe: A Prophetic Sketch of the Messiah - Part 3: From the Manger to the Grave. In the second part I focused on the Biblical prophecies concerning the Messianic age. Today we’re going to examine the lineage, location, and death of the Messiah.The Son of David: The first point of data appears back in the book of Genesis. A Prophetic Sketch of the Messiah - Part 2: In the Fullness of Time. In the first part I laid out some guidelines for how I’m approaching the Messianic prophecies. Now I’ll begin walking through some of the more compelling ones I found using that criteria. Today's goal is to pin down the time period we’re looking for our Messiah to appear in.The Fourth Kingdom:

A Prophetic Sketch of the Messiah - Part 1: Intro. A while ago a good friend of mine asked if I could write about the prophecies concerning Jesus. I still don’t know as much as I’d like, but I can offer a short summary. The Curious Case of the Protestant Bible. Skip to main content. Recent Presentation on Messianic Prophecy: Divine Hiddenness, pt. 2. Strange Notions cites an objection that has come up here a few times before: “[O]n standard theisms, God supposedly loves us, and so desires our ultimate well-being. But that ultimate well-being necessarily involves having a positive relationship with God, and in order to have such a relationship one must first believe that God exists.

So if God really existed and really loved us, He would make sure that all of us believed in Him. Old Porphyry Recognizes the Papacy. Sin against the Spirit, (2) June 10, 2018 at 3:46 pm (Uncategorized) [W]hoever blasphemes against the Holy Spirit will never be forgiven, but is guilty of an eternal sin. He said this because they [the Pharisees] were saying, ‘He has an evil spirit’.”Mark 3: 28. My 2018 Bible Talk - 3 Critiques of the Gospels. The Bible Holds True Against Attacks From Critics. A chronology of the resurrection appearances. Posted by thejambos under Uncategorized1 Comment Anything to quibble with here? Trinitarian aporetic syllogisms – Just Thomism.

While teaching class, I was halfway through giving an objection to the trinity… Jp2-b16-commentaries. Notes. Mark of Ephesus the Council of Florence. Debate Death Penalty Ed Feser Mons. Swetland. El Salvador y su amor por nosotros. Ser o no ser Santo. The Death of the Lord and the hour of the slaying of the lambs. Fr. Z's Blog. (Jn. 13:1) Does John contradict the Synoptics regarding the Passover meal? Theosis. December 14, 2016 at 8:30 pm (Uncategorized) Luther and Catholic Faith in Contradiction?

Aquinas in the Orthodox Tradition, by Marcus Plested. Don’t Even Try (Again) BIBLE EXEGESIS. From Anselmianism to the Trinity. Alice in “Amoris Laetitia” Land. EVAGRIO PONTICO TRATADO PRACTICO. Watch this Amazing Explanation of the Sacrament of Confirmation – EpicPew. What does a religious brother have to say about marriage and family life? - Truth and Charity Forum. Paul's Pagan Quotations II. What the Book of Proverbs Has to Say About the Current Age - Community in Mission. Fundamentalism of the Sources: Problems with Some Practices of Source Criticism - Part 10. 7 Illustrations of How People in the Old Testament Viewed the Universe.

Synod on the Family: the path of the Ordo Paenitentium. New Liturgical Movement: How is the Marriage of Joseph and Mary a True Marriage? Faculteit Theologie en Religiewetenschappen - Doctorates at the faculty. #088: Revelation (Chs 15-16) 7 Chalices of Wrath (Catholic Apocalypse Part 10) - Taylor Marshall. A CHARISMATIC LEARNS TO TAKE UP HER CROSS: SOME ORTHODOX THOUGHTS. A New Understanding of Anselm. St. Gregory Nazianzen on the Primacy of the Common Good in the Spiritual Life. Elijah’s journey: 40 days and 40 nights? The Eucharist and the Letter to the Hebrews.

Walter Martin Explains the Trinity. Aristotle Papanikolaou Bringing Virtue Theory and Deification Together. You searched for Did jewish temple virgins exist - Taylor Marshall. Eastern Contradiction re: Clerical Celibacy. John Martin Delivers Paper on St Sergius’ life and the life of St Benedict (video) A Catholic View of Orthodoxy by Aidan Nichols OP. Could this lead to Orthodox-Catholic unity on the papacy and beyond?

Why Study Heresy in the Later Middle Ages? St. Antoninus of Florence and Christian Community. The Temple and the Garden of God. Subversive Orthodoxy Meets the Libertarian Preferential Option for the Rich. Summary of the clerical continence debate and response to a recent Roman statement thereon. Amistad, Silencio y Palabra - 01 (video) A commentary on the Psalms: from primitive and mediaeval writers. Proceedings of the Catholic Theological Society of America - Archive.