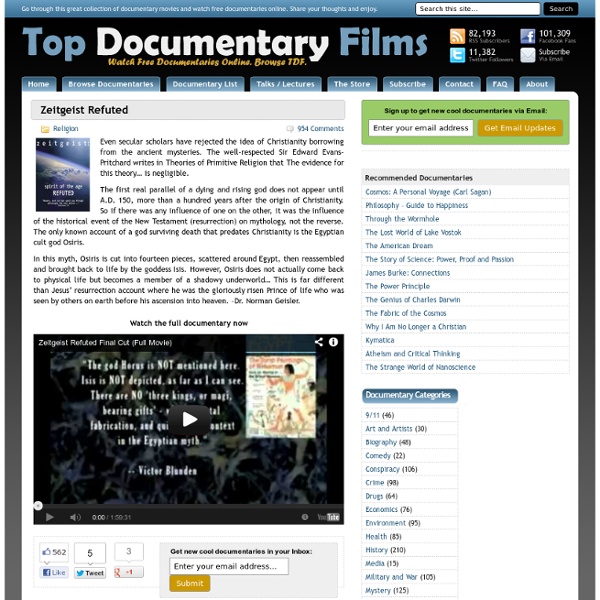 Even secular scholars have rejected the idea of Christianity borrowing from the ancient mysteries. The well-respected Sir Edward Evans-Pritchard writes in Theories of Primitive Religion that The evidence for this theory... is negligible. The first real parallel of a dying and rising god does not appear until A.D. 150, more than a hundred years after the origin of Christianity. In this myth, Osiris is cut into fourteen pieces, scattered around Egypt, then reassembled and brought back to life by the goddess Isis. Watch the full documentary now Related:  other gods

Family tree of the Greek gods Key: The essential Olympians' names are given in bold font. See also List of Greek mythological figures Notes External links Media related to Family trees of Greek mythology at Wikimedia Commons Virgin Births (Mythology) Miraculous births are a common element in historical literature and religious texts. Stories of miracle births often include miraculous conceptions and features such as intervention by a deity, supernatural elements, astronomical signs, hardship or in the case of some mythologies complex plots related to creation. Dharmic Mythology[edit] Hinduism[edit] In the story of Krishna the deity is the agent of conception and also the offspring. This is occasionally brought up as evidence for the hypothesis that "virgin birth" tales are a fairly common phenomenon in non-Christian religions around the world.[2][3][4] However, there is nothing in Hindu scriptures to suggest that it was a "virgin" birth. In the Mahabharata epic, Karna was born to Queen Kunti by the deity Surya, before her marriage to King Pandu.[6][7] However, some Hindus believe that when the emanations of the Supreme Being are pratyacsha, or obvious to the sight, they become sacara, or embodied. Buddhism[edit] Birth of Buddha[edit]

Virgin Birth or Virgin Conception? Ancient Egyptian Gods, Osiris, Isis, Hathor, Horus, Ra, Amun, Anubis, Nut, Ptah - Photos of Egypt - Images of Ancient Egypt - Pictures of Egypt - Photos of Ancient Egypt - Karnak, Pyramids, Tutankhamun, Abu Simbel, Aswan, The Nile, Edfu, Kom Ombo, Felucca Four Highly Recommended Telescope, Accessory and Astro Imaging suppliers in the UK These are suppliers I have used and their Helpfulness and Customer Service have been second-to-none. The Serpent and the Real Origins of Freemasonry By Philip Gardiner | bestsyndication.com Abraham the Israelite father of mankind, and Hiram of the Freemasons, are one and the same, and both are based upon serpent worshippers with Indian Naga or serpent deity backgrounds. A grand statement, but one that I am not alone in making. Flavious Josephus said in his History of the Jews: “These Jews are derived from the Indian philosophers; they are named by the Indians Calani.” Megasthenes, sent to India by Seleucus Nicator, also said that the Jews were called “Kalani” and that they were an Indian tribe. Clearchus of Soli said: “The Jews descend from the philosophers of India. If Abraham as the father of the Jewish race is therefore a legendary figure of India, then who is he? The obvious person for an Indian Abraham is Brahma (A-Brahma) who just happens to have a consort and sister named Saraisvati [1]­ which is amazingly similar to the name of the Biblical Abraham’s wife - Sarai. “But indeed she is truly my sister. Hiram and the Temple Notes: 1.

Godchecker.com - Your Guide To The Gods NIMROD. —Biblical Data: Son of Cush and grandson of Ham; his name has become proverbial as that of a mighty hunter. His "kingdom" comprised Babel, Erech, Accad, and Calneh, in the land of Sinar, otherwise known as the land of Nimrod (Gen. x. 8-10; I Chron. i. 10; Micah v. 5 [A. —In Rabbinical Literature: Nimrod is the prototype of a rebellious people, his name being interpreted as "he who made all the people rebellious against God" (Pes. 94b; comp. ; Gen. His Feats as a Hunter. Nimrod was not wicked in his outh. Made King. According to another account, when Nimrod was eighteen years old, war broke out between the Hamites, his kinsmen, and the Japhethites. Nimrod is generally considered to have been the one who suggested building the Tower of Babel and who directed its construction. ) during the dispersion. Nimrod's Dream. The punishment visited on the builders of the tower did not cause Nimrod to change his conduct; he remained an idolater. —Critical View: Bibliography: Cheyne and Black, Encyc.