Steven Pinker: The stuff of thought 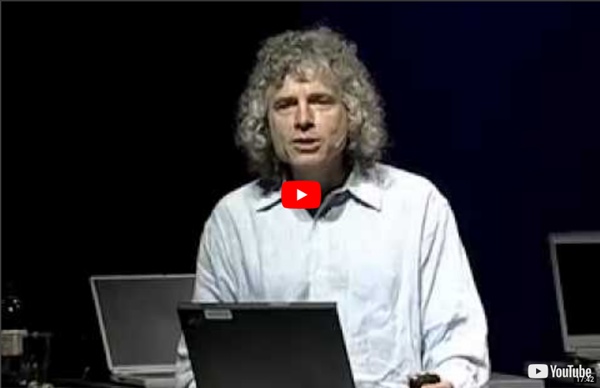 CriticalThinking.org - Critical Thinking Model 1 To Analyze Thinking We Must Identify and Question its Elemental Structures Standard: Clarityunderstandable, the meaning can be grasped Could you elaborate further? Could you give me an example? Could you illustrate what you mean? Standard: Accuracyfree from errors or distortions, true How could we check on that? Standard: Precisionexact to the necessary level of detail Could you be more specific? Standard: Relevancerelating to the matter at hand How does that relate to the problem? Standard: Depthcontaining complexities and multiple interrelationships What factors make this a difficult problem? Standard: Breadthencompassing multiple viewpoints Do we need to look at this from another perspective? Standard: Logicthe parts make sense together, no contradictions Does all this make sense together? Standard: Significancefocusing on the important, not trivial Is this the most important problem to consider? Standard: FairnessJustifiable, not self-serving or one-sided Think About... State the Question

Altruism Giving alms to the poor is often considered an altruistic action. Altruism or selflessness is the principle or practice of concern for the welfare of others. It is a traditional virtue in many cultures and a core aspect of various religious traditions and secular worldviews, though the concept of "others" toward whom concern should be directed can vary among cultures and religions. Altruism or selflessness is the opposite of selfishness. Altruism can be distinguished from feelings of loyalty. Pure altruism consists of sacrificing something for someone other than the self (e.g. sacrificing time, energy or possessions) with no expectation of any compensation or benefits, either direct, or indirect (e.g., receiving recognition for the act of giving). Much debate exists as to whether "true" altruism is possible. The notion of altruism[edit] The concept has a long history in philosophical and ethical thought. Individual variations[edit] A 1986 study estimated that altruism was half-inherited.

Languages Grew From a Seed in Africa, a Study Says The finding fits well with the evidence from fossil skulls and DNA that modern humans originated in Africa. It also implies, though does not prove, that modern language originated only once, an issue of considerable controversy among linguists. The detection of such an ancient signal in language is surprising. Because words change so rapidly, many linguists think that languages cannot be traced very far back in time. Quentin D. Some of the click-using languages of Africa have more than 100 phonemes, whereas Hawaiian, toward the far end of the human migration route out of Africa, has only 13. This pattern of decreasing diversity with distance, similar to the well-established decrease in genetic diversity with distance from Africa, implies that the origin of modern human language is in the region of southwestern Africa, Dr. Language is at least 50,000 years old, the date that modern humans dispersed from Africa, and some experts say it is at least 100,000 years old. Dr. In 2003 Dr. Dr.

Compassion Compassion personified: a statue at the Epcot center in Florida Compassion is the response to the suffering of others that motivates a desire to help.[1][2] Compassion is often, though not inevitably, the key component in what manifests in the social context as altruism.[citation needed] In ethical terms, the expressions down the ages of the so-called Golden Rule often embodies by implication the principle of compassion: Do to others what you would have them do to you.[3][original research?] The English noun compassion, meaning to love together with, comes from Latin. Theories[edit] Three theoretical perspectives of compassion have been proposed, which are contrasted by their predictions and approaches of compassion. Identifying with another person is an essential process for human beings. Psychology[edit] Compassion has become related and researched in the field of positive psychology and social psychology. Neuropsychology[edit] Medicine[edit] Fatigue[edit] Applications[edit] Practicing[edit]

YOU'VE BEEN VERBED Friending, trending, even evidencing and statementing... plenty of nouns are turning into verbs. Anthony Gardner works out what’s going on ... From INTELLIGENT LIFE Magazine, Winter 2010 Mothers and fathers used to bring up children: now they parent. Critics used to review plays: now they critique them. The English language is in a constant state of flux. It is found in all areas of life, though some are more productive than others. New technology is fertile ground, partly because it is constantly seeking names for things which did not previously exist: we “text” from our mobiles, “bookmark” websites, “inbox” our e-mail contacts and “friend” our acquaintances on Facebook —only, in some cases, to “defriend” them later. Sport is another ready source. Verbing—or denominalisation, as it is known to grammarians—is not new. There is a difference today, says Robert Groves, one of the editors of the new “Collins Dictionary of the English Language”. What’s the driving force behind it?

Real-time brain feedback can help people overcome anxiety This image from the study shows changes in degree of connectivity in the feedback group. Increases are shown in red/yellow and decreases in blue/purple. Decreases in connectivity are seen in limbic areas, and increases are seen in prefrontal regions. (Credit: D Scheinost et al. People provided with a real-time readout of activity in specific regions of their brains can learn to control that activity and lessen their anxiety, say Yale researchers. They used functional magnetic resonance imaging (fMRI), to display the activity of the orbitofrontal cortex (a brain region just above the eyes) to subjects while they lay in a brain scanner. Through a process of trial and error, these subjects were gradually able to learn to control their brain activity. Extreme anxiety associated with worries about dirt and germs is characteristic of many patients with obsessive-compulsive disorder (OCD).