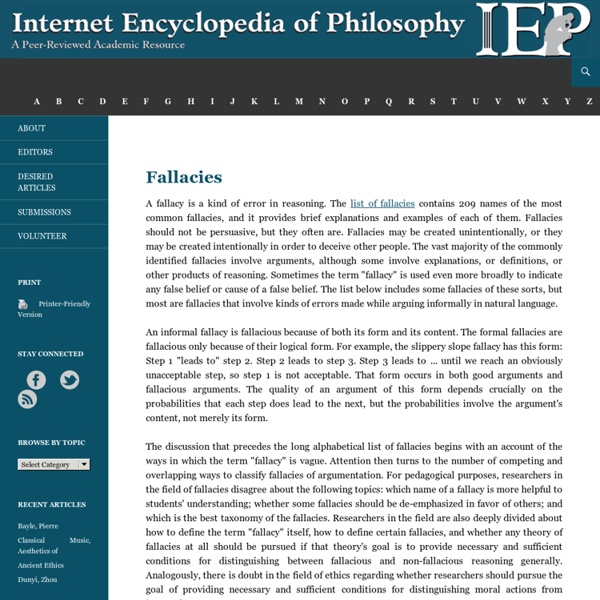 A fallacy is a kind of error in reasoning. The list of fallacies contains 209 names of the most common fallacies, and it provides brief explanations and examples of each of them. Fallacies should not be persuasive, but they often are. Fallacies may be created unintentionally, or they may be created intentionally in order to deceive other people. The vast majority of the commonly identified fallacies involve arguments, although some involve explanations, or definitions, or other products of reasoning. Sometimes the term "fallacy" is used even more broadly to indicate any false belief or cause of a false belief. An informal fallacy is fallacious because of both its form and its content. The discussion that precedes the long alphabetical list of fallacies begins with an account of the ways in which the term "fallacy" is vague. Table of Contents 1. The more frequent the error within public discussion and debate the more likely it is to have a name. The term "fallacy" is not a precise term. Related:  Critical Thinking

Fallacies Dr. Michael C. Labossiere, the author of a Macintosh tutorial named Fallacy Tutorial Pro 3.0, has kindly agreed to allow the text of his work to appear on the Nizkor site, as a Nizkor Feature. It remains © Copyright 1995 Michael C. Labossiere, with distribution restrictions -- please see our copyright notice. If you have questions or comments about this work, please direct them both to the Nizkor webmasters (webmaster@nizkor.org) and to Dr. Other sites that list and explain fallacies include: Constructing a Logical Argument Description of Fallacies In order to understand what a fallacy is, one must understand what an argument is. There are two main types of arguments: deductive and inductive. A fallacy is, very generally, an error in reasoning.

Logical Fallacies More logic: talks and handouts This page lists various notes, handouts, papers, and so on from the last few years. Many of these pieces are also linked to from other pages here or from old blog postings. They are of very varying levels of sophistication, difficulty and interest: but I haven’t tried to impose any more order on the list other than a rough (reverse) chronological order. Tennenbaum’s Theorem (a rewritten version of a reasonably accessible proof, with the old short discussion of its sometimes supposed conceptual significance which fed into the joint paper with Tim Button). 2013, revised 2014Critical Notice of Volker Halbach Axiomatic Theories of Truth and Leon Horsten The Tarskian Turn in Analysis 2013Review of Baaz et al. Kurt Gödel and the Foundations of Mathematics: Horizons of Truth in Philosophia Mathematica 2012.Review of Penelope Maddy Defending the Axioms (with Luca Incurvati) in Mind 2012Is ‘no’ a force-indicator?

Critical thinking activity game for high,middle school,college students,problem solving skills games Shift 2 for kids,adults Shift 2 is a totally addicting brain-teasing puzzle platformer game for all ages which helps develop your logic / analytical thinking skills (A puzzle platform is a jumping puzzle game where the key objective involves solving puzzles or riddles). Make your way through the maze (labyrinth) to earn your trophy, turn your world around, and challenge and develop your problem solving skills. The objective of the game is to reach the key to unlock the door in order to proceed to the next level. Important – Falling on spikes will hinder your progress. Click on ‘Extras’ before you start playing, and create your own Shift levels. Who knows, maybe a player’s level pack will be released! You can clear your saved data at any time by clicking on the ‘Clear data’ icon. How to Play: Use the Arrow Keys on your computer keyboard to turn right and left.

Operation ARIES! Professors wanted a better way to teach the skills of critical thinking and scientific reasoning, students wanted engagement and video games, the answer: Operation ARIES! Operation ARIES! The training proceeds in three stages: the Training Module, the Case Studies Module, and the Interrogation Module. In the Training Module, students learn about science by reading the Fuath's Guide to the Bean's World of Science that was written by aliens (the Fuaths). The game covers 21 scientific concepts shared among psychology, sociology, biology, and chemistry. Intellectio Top 20 Logical Fallacies - The Skeptics' Guide to the Universe Introduction to Argument Structure of a Logical Argument Whether we are consciously aware of it or not, our arguments all follow a certain basic structure. They begin with one or more premises, which are facts that the argument takes for granted as the starting point. Then a principle of logic is applied in order to come to a conclusion. This structure is often illustrated symbolically with the following example: Premise1: If A = B, Premise2: and B = C Logical connection: Then (apply principle of equivalence) Conclusion: A = C In order for an argument to be considered valid the logical form of the argument must work – must be valid. Also it is important to note that an argument may use wrong information, or faulty logic to reach a conclusion that happens to be true. Breaking down an argument into its components is a very useful exercise, for it enables us to examine both our own arguments and those of others and critically analyze them for validity. Examine your Premises Ad hominem Straw Man

The 10 Stages of the Creative Process The Hunch Any project starts with a hunch, and you have to act on it. It’s a total risk because you’re just about to jump off a cliff, and you have to go for it if you believe in it. Talk About It Tell your family, tell your friends, tell your community … they’re the ones who are going to support you on this whole treacherous journey of the creative process, so involve them, engage them. The Sponge I’m going to tons of art shows, I’m watching a lot of movies, I’m reading voraciously… and I’m just sponging up ideas and trying to formulate my own idea about the subject. Build I love the world “filmmaker” because it has “maker” in it. Confusion Dread. Just Step Away Take a breather — literally just step away from the project… Let it marinate — don’t look at it or think about it. “The Love Sandwich” The Premature Breakthroughlation Revisit Your Notes Know When You’re Done

Classification 5 Ways Statistics Are Used to Lie to You Every Day Humans are terrible with numbers. They just don't fit in our brains. It's why scientists can hammer us with statistics about global warming but we will stop believing in it as soon as it gets cold where we live. It's not our fault -- the human brain just isn't built for this, and quite frankly, we don't really need to process huge numbers to get by in our everyday lives. But there are some basics that everyone should know. #5. Photos.com Sounds Like ... Here's a shocking statistic: The average income in the United States is around $70,000. Jupiterimages/Creatas/Getty Images"What the hell else are garages for?" The Problem Is ... The popular use of the term "average" is way different from the mathematical term, but they get used interchangeably. Well, we all learned in school how to calculate an average: You take all the values you're averaging, add them up, and divide them by the number of values. Photos.com"Unfair? Why Does It Matter? #4. Jupiterimages/Creatas/Getty Images Digital Vision.

Bloom’s Taxonomy by Patricia Armstrong, Assistant Director, Center for Teaching Background Information In 1956, Benjamin Bloom with collaborators Max Englehart, Edward Furst, Walter Hill, and David Krathwohl published a framework for categorizing educational goals: Taxonomy of Educational Objectives. Familiarly known as Bloom’s Taxonomy, this framework has been applied by generations of K-12 teachers and college instructors in their teaching. The framework elaborated by Bloom and his collaborators consisted of six major categories: Knowledge, Comprehension, Application, Analysis, Synthesis, and Evaluation. While each category contained subcategories, all lying along a continuum from simple to complex and concrete to abstract, the taxonomy is popularly remembered according to the six main categories. The Original Taxonomy (1956) Here are the authors’ brief explanations of these main categories in from the appendix ofTaxonomy of Educational Objectives (Handbook One, pp. 201-207): The Revised Taxonomy (2001)