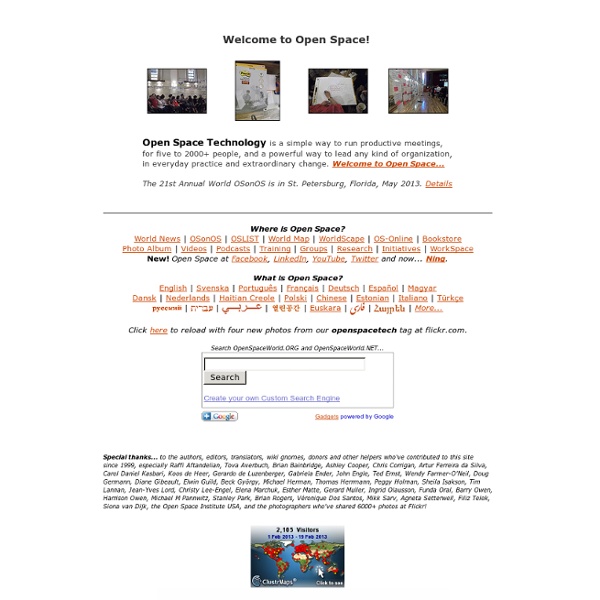 Future Search - The Method - What is Future Search? Future search is a PLANNING MEETING that helps people transform their capability for action very quickly. The meeting is task-focused. It brings together 60 to 80 people in one room or hundreds in parallel rooms. Future search brings people from all walks of life into the same conversation - those with resources, expertise, formal authority and need. They meet for 16 hours spread across three days. People tell stories about their past, present and desired future.

The Mystery of the Tiny Door in a Tree Pam Madigan walked deliberately among the Golden Gate Park Concourse’s grove of knotted old trees as if searching for a pot of gold -- ignoring the attractions of the nearby DeYoung Museum and Academy of Sciences. With her infant son cradled in her arms, her eyes darted to the base of a particular elm where a tiny wooden door covered a large knot hole. She summoned her group of friends and children, pointing to the tiny door which was not more than a foot tall. “It was sort of an idea to have a scavenger hunt and go out and look for it,” Madigan said. “It’s not on a map.”

Art of Hosting Advanced Practice Course Register this course is made for you Registration is now closed! P. J. O'Rourke There is only one basic humanright, the right to do as you damn well please. And with it comes the only basic human duty, the duty to take the consequences. The Democrats are the party that says government will make you smarter, taller, richer, and remove the crabgrass on your lawn. Use our methods DP0 (Design Project Zero) is a 90-minute (including debrief) fast-paced project though a full design cycle. Students pair up to interview each other, create a point-of-view, ideate, and make a new solution that is “useful and meaningful” to their partner. Two versions of DP0 are “The Wallet Project” and “The Gift-Giving Project”. They have the similar format, only the topic is different. The original DP0 The Wallet Project was created for the d.school’s very first course in 2004 and the project starts with students looking at the content of their partner’s wallet or purse (and goes on to ask every student to design something for their partner).

10 Great Warm up Activities For The Classroom Warm up strategies for our classroom are an excellent teaching tool! We all know that starting the lesson with a good hook activity sets us up for a better chance of success. It captivates the students and draws them into the lesson - giving us the opportunity to "do our thing"! Below I have put together a few warm ups that my MAT professor Dr Cynthia Alby gave us as students - thanks Cynthia! Google merges online and offline worlds in Maps SAN FRANCISCO — Google on Aug. 8 took another step in its quest to merge the Internet with the real world with Maps and put itself at the heart of mobile gadget lifestyles in the process. The California technology titan added Poland and the Ukraine to the list of more than 200 countries and regions where people can correct, update, or enhance Google Maps with local insights or expertise. "Google has been about searching the online world, but most people live in the offline world, the physical world," Google Earth and Maps vice president Brian McClendon told AFP.

Therapeutic Recreation Activities & Tx Ideas: Warm-up Activities- Active "Activities of a socially infectious nature, where stress is placed on cooperative, rather than the competitive, aspects of some recreation activities, can be used to attract patients' attention and to sustain their interaction. Very simple games played in a small group may serve to encourage participation by making the patient feel an integral and necessary part of the activity." (O'Morrow, The Whys of Recreation Activities for Psychiatric Patients, Therapeutic Recreation Journal, 3rd quarter, 1971). Rock Paper Scissor Congo Line submitted by Matt Hunter of TR Student on June 29, 2009 Size of Group: 10+

10 false facts most people think are true Up until the late 16th century, everyone "knew" that the sun and planets revolved around the Earth. Up until the late 19th century, epidemic illnesses such as cholera and the plague were "known" to be caused by a poisonous mist filled with particles from rotting things. Up until the early 20th century, the most common procedure performed by surgeons for thousands of years was bloodletting, because we "knew" that blood drained from the body balanced the whacky humors responsible for poor health. Well alrighty then. But as misinformed as all that may sound now, our predecessors believed these "facts" with the same certainty that we believe that the Earth is round and hot fudge sundaes make us fat. Living in a time of such dazzling science and technology, we stand firmly behind our beliefs … even if so much of what we think we know to be correct is actually wrong.

Books That Shaped America The Library of Congress, the world’s largest repository of knowledge and information, began a multiyear “Celebration of the Book” with an exhibition on “Books That Shaped America.” The books in the exhibition, along with several that were added reflecting the results of a public survey, are displayed below. “This list is a starting point,” said Librarian of Congress James H. Billington. “It is not a register of the ‘best’ American books – although many of them fit that description. Rather, the list is intended to spark a national conversation on books that have influenced American lives, whether they appear on this list or not.” Twenty-eight containers transform orphanage in South Africa Having last looked at a temporary use of shipping containers as building blocks, with O+A's festival backdrop in Amsterdam, we're back in permanent territory (as permanent as new buildings are, that is) with 4D and A Architects' shipping container housing at New Jerusalem Orphanage at Gauteng, South Africa. The project is among the more ambitious uses of shipping containers we've seen, using 28 containers in all. Gizmag spoke briefly to its designers to find out more about it. View all In an email to Gizmag, Mia Anfield of 4D and A wrote that the idea to use shipping containers came from the fact that two were already on site for storage. The company had already been interested in the work of Adam Kalkin, an American architect and prefabrication specialist who was among the first to put shipping containers to use as houses.

5 Tips to Market Yourself as an eLearning Professional In this article I will share some invaluable tips and techniques for how to market yourself as an eLearning professional, so that you can get the word out about your top-notch eLearning services and attract the clients and projects that you really want! There isn't any doubt that acquiring experience and expanding your knowledge of eLearning practices and principles are key to success in the eLearning industry. However, even the most seasoned eLearning Professionals won't be able to build a thriving eLearning business unless they have an effective marketing strategy in place.