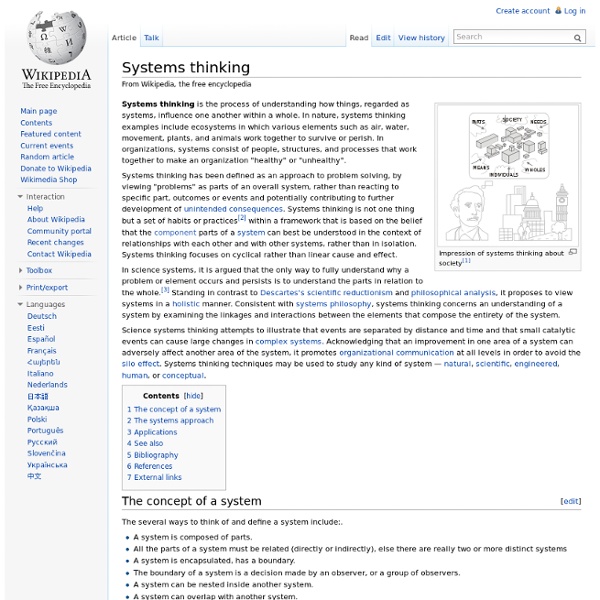 Impression of systems thinking about society[1] A system is composed of interrelated parts or components (structures) that cooperate in processes (behavior). Natural systems include biological entities, ocean currents, the climate, the solar system and ecosystems. Designed systems include airplanes, software systems, technologies and machines of all kinds, government agencies and business systems. Systems Thinking has at least some roots in the General System Theory that was advanced by Ludwig von Bertalanffy in the 1940s and furthered by Ross Ashby in the 1950s. The term Systems Thinking is sometimes used as a broad catch-all heading for the process of understanding how systems behave, interact with their environment and influence each other. Systems thinking has been applied to problem solving, by viewing "problems" as parts of an overall system, rather than reacting to specific parts, outcomes or events and potentially contributing to further development of unintended consequences.

thinkLets / NeuroScapes PEACEparadigm ... Multiverse ... LostLegends ... Fifth Freedom i4CQuest ... Lessons NOT Learned ... SwiftTrust Theory of constraints The theory of constraints (TOC) is a management paradigm that views any manageable system as being limited in achieving more of its goals by a very small number of constraints. There is always at least one constraint, and TOC uses a focusing process to identify the constraint and restructure the rest of the organization around it. TOC adopts the common idiom "a chain is no stronger than its weakest link."

The Fifth Discipline The Fifth Discipline: The Art and Practice of the Learning Organization (Senge 1990) is a book by Peter Senge (a senior lecturer at MIT) focusing on group problem solving using the systems thinking method in order to convert companies into learning organizations. The five disciplines represent approaches (theories and methods) for developing three core learning capabilities: fostering aspiration, developing reflective conversation, and understanding complexity.[1] The Five Disciplines[edit] The five disciplines of what the book refers to as a "learning organization" discussed in the book are: "Personal mastery is a discipline of continually clarifying and deepening our personal vision, of focusing our energies, of developing patience, and of seeing reality objectively.

Systems Thinking Part 1: Philosophy - Teen Skepchick Students in my faculty of environmental studies are often presented with romantic ideas of interconnectedness, interdisciplinary approaches to their work and working within a worldview that counters traditional analytical and reductionist science. Unfortunately, instead of rigorously looking at what is wrong with traditional scientific approaches in their work, fixing it and coming up with a new approach they simply write science off as colonial or anti-feminist or whatever other buzzword they would like to apply. Then they pick a new, and often random, approach to their work. Rarely is the importance of solidifying the philosophy behind these ideas and mindfully focusing on a methodology to approach this philosophy stressed. It became apparent to me in my last year of undergraduate that both of these activities are necessary for rigorous social science, activism and real world interventions to be approached successfully. Is There a Problem with Traditional Science?

What is Lean The core idea is to maximize customer value while minimizing waste. Simply, lean means creating more value for customers with fewer resources. A lean organization understands customer value and focuses its key processes to continuously increase it. The ultimate goal is to provide perfect value to the customer through a perfect value creation process that has zero waste. How Does Your Project Portfolio Stack Up? -INNOTAS From day one, we are conditioned to compare. Whose baby has the cutest smile, who had the most hits in the Little League game, and what is your GPA and SAT scores? As we grow older the comparisons shift and the stakes increase – how am I doing vs. my peers, is my company performing well vs. my sector or industry, and how can I beat the competition?

System dynamics Dynamic stock and flow diagram of model New product adoption (model from article by John Sterman 2001) System dynamics is an approach to understanding the behaviour of complex systems over time. It deals with internal feedback loops and time delays that affect the behaviour of the entire system.[1] What makes using system dynamics different from other approaches to studying complex systems is the use of feedback loops and stocks and flows. Synthesis In general, the noun synthesis (from the ancient Greek σύνθεσις, σύν "with" and θέσις "placing") refers to a combination of two or more entities that together form something new; alternately, it refers to the creating of something by artificial means. The corresponding verb, to synthesize (or synthesise), means to make or form a synthesis. Synthesis or synthesize may also refer to: Science[edit] Chemistry and biochemistry[edit]

Theory of Constraints Overview Introduction Let’s Start By Stopping For A Moment Slow down, block out the rest of the world for a moment, and take the time to consider the following. Have you ever found yourself in a situation where you were waiting for someone to provide you with something, something that you must work on, and in-turn, which you had to pass on to someone else? Someone else who may have also been waiting for that particular piece of work?

Autopoiesis 3D representation of a living cell during the process of mitosis, example of an autopoietic system. The original definition can be found in Autopoiesis and Cognition: the Realization of the Living (1st edition 1973, 2nd 1980): Page 78: - An autopoietic machine is a machine organized (defined as a unity) as a network of processes of production (transformation and destruction) of components which: (i) through their interactions and transformations continuously regenerate and realize the network of processes (relations) that produced them; and (ii) constitute it (the machine) as a concrete unity in space in which they (the components) exist by specifying the topological domain of its realization as such a network. [1] Page 89:- [...] the space defined by an autopoietic system is self-contained and cannot be described by using dimensions that define another space. Meaning[edit]

Russell L. Ackoff Russell Lincoln Ackoff (/ˈækɒf/; 12 February 1919 – 29 October 2009) was an American organizational theorist, consultant, and Anheuser-Busch Professor Emeritus of Management Science at the Wharton School, University of Pennsylvania. Ackoff was a pioneer in the field of operations research, systems thinking and management science. Biography[edit] Russell L. Ackoff was born on February 12, 1919 in Philadelphia to Jack and Fannie (Weitz) Ackoff.[1] He received his bachelor degree in architecture at the University of Pennsylvania in 1941. After graduation, he taught at Penn for one year as an assistant instructor in philosophy.