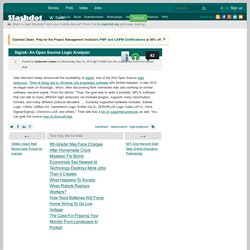 Tired of being tied to Windows and proprietary software with limited features, in late 2010 he began work on flosslogic, which, after discovering Bert Vermeulen was also working on similar software, became sigrok. From the article: "Thus, the goal was to write a portable, GPL'd, software that can talk to many different logic analyzers via modules/plugins, supports many input/output formats, and many different protocol decoders. ... Currently supported hardware includes: Saleae Logic, CWAV USBee SX, Openbench Logic Sniffer (OLS), ZEROPLUS Logic Cube LAP-C, ASIX Sigma/Sigma2, ChronoVu LA8, and others. " Their wiki has a list of supported protocols as well. You can grab the source over at SourceForge. Logic analyzer: visualizing latency between two digital signals in real time with sigrok and matplotlib. In my previous post I described how to manipulate data extracted from a Saleae logic analyzer with Python, to view the latency between two digital signals and deduce the temporal jitter of one of them. 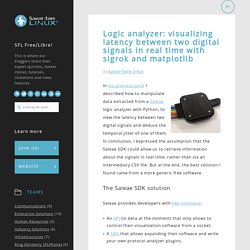 In conclusion, I expressed the assumption that the Saleae SDK could allow us to retrieve information about the signals in real time, rather than via an intermediary CSV file. But at the end, the best solution I found came from a more generic free software. The Saleae SDK solution Saleae provides developers with two solutions: An API (in beta at the moment) that only allows to control their visualization software from a socket;A SDK that allows expanding their software and write your own protocol analyzer plugins.

We could have looked at the SDK and written a parser exporting the latency between two defined signals on the fly, but this solution is dependent on the Saleae software and its evolutions, ensuring very low durability. Protocol decoders - sigrok. Supported hardware - sigrok. Sigrok is intended as a flexible, cross-platform, and hardware-independent software suite, i.e., it supports various devices from many different vendors. 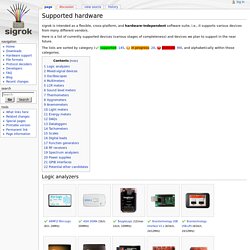 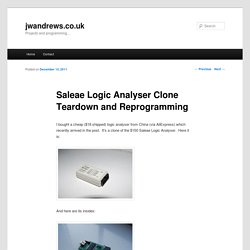 It’s a clone of the $150 Saleae Logic Analyser. Here it is: And here are its insides: A rather grubby looking board. I also noticed a couple of small solder balls which could have been shorting out a couple of the pins of the main IC, the Cypress CY7C68013A, so I removed them. The only difference to the Saleae Logic is the addition of an HC245, an ‘Octal 3-State Noninverting Bus Transceiver’, on the back of the board. Note the 2Kb (256 byte) EEPROM on the bottom right of the final photo. The Logic Analyzer with Analog - Saleae. Downloads. Dirker/sdmmc-analyzer. GoBus 1.5 Protocol Analyzer Plugins for Saleae Logic - Netduino Go - Netduino Forums. To help build and debug the new GoBus 1.5 protocol, I have created a pair of protocol analyzer plugins for use with the Saleae Logic software. 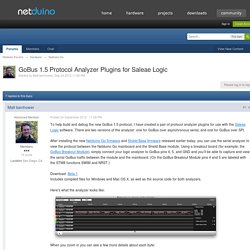 There are two versions of the analyzer: one for GoBus over asynchronous serial, and one for GoBus over SPI. After installing the new Netduino Go firmware and Shield Base firmware released earlier today, you can use the serial analyzer to view the protocol between the Netduino Go mainboard and the Shield Base module. Using a breakout board (for example, the GoBus Breakout Module), simply connect your logic analyzer to GoBus pins 4, 5, and GND and you'll be able to capture and view the serial GoBus traffic between the module and the mainboard.

(On the GoBus Breakout Module pins 4 and 5 are labeled with the STM8 functions SWIM and NRST.) Download: Beta 1 Includes compiled files for Windows and Mac OS X, as well as the source code for both analyzers. Here's what the analyzer looks like: When you zoom in you can see a few more details about each byte: Saleae Logic. The logic analyzer you'll love to use.