Guide to Philosophy on the Internet (Suber) 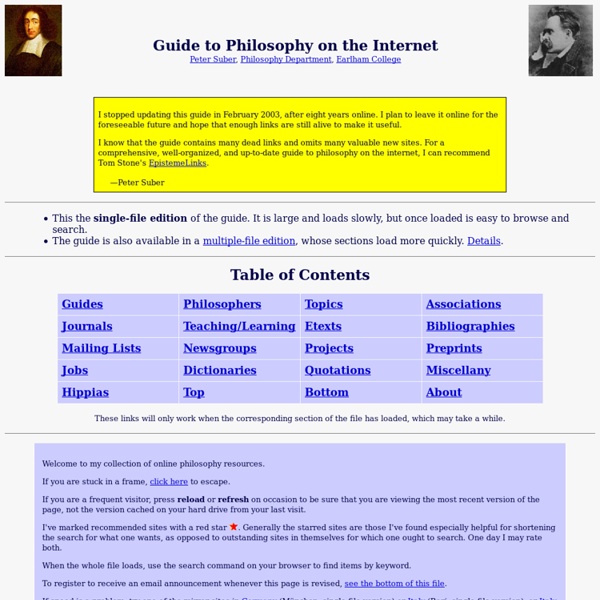 Welcome to my collection of online philosophy resources. If you are stuck in a frame, click here to escape. If you are a frequent visitor, press reload or refresh on occasion to be sure that you are viewing the most recent version of the page, not the version cached on your hard drive from your last visit. I've marked recommended sites with a red star . Generally the starred sites are those I've found especially helpful for shortening the search for what one wants, as opposed to outstanding sites in themselves for which one ought to search. When the whole file loads, use the search command on your browser to find items by keyword. To register to receive an email announcement whenever this page is revised, see the bottom of this file. If speed is a problem, try one of the mirror sites in Germany (München, single-file version) or Italy (Bari, single-file version), or Italy (Bari, multi-file version). About this guide.

Values Explanations > Values About values | Historical values | Research on values | So what? Values is a confusing word that often gets confused with 'value' as in the value you get from buying a cheap, but well-built house. Values are, in fact powerful drivers of how we think and behave.

Romanticism Defining Romanticism[edit] Basic characteristics[edit] Defining the nature of Romanticism may be approached from the starting point of the primary importance of the free expression of the feelings of the artist. The importance the Romantics placed on untrammelled feeling is summed up in the remark of the German painter Caspar David Friedrich that "the artist's feeling is his law".[7] To William Wordsworth poetry should be "the spontaneous overflow of powerful feelings".[8] In order to truly express these feelings, the content of the art must come from the imagination of the artist, with as little interference as possible from "artificial" rules dictating what a work should consist of. Not essential to Romanticism, but so widespread as to be normative, was a strong belief and interest in the importance of nature. However this is particularly in the effect of nature upon the artist when he is surrounded by it, preferably alone.

The History of Philosophy - Summarized & Visualized This is my summary of the history of Western philosophy showing the positive/negative connections between some of the key ideas/arguments/statements of the philosophers. It is not an automated text analysis project; the content and the connections are the result of my years of reading and taking notes, so it’s a never-ending work-in-progress. It started with Bryan Magee’s The Story of Philosophy and Thomas Baldwin’s Contemporary Philosophy as the main references but it keeps expanding with dozens of others.

Ancien Régime This article is about the administrative, judicial, and ecclesiastic structures of the Kingdom of France in the pre-revolutionary period. For a general history of France in this period, see Early modern France. For the political history of France in this period, see Kingdom of France. Much of the medieval political centralization of France had been lost in the Hundred Years' War, and the Valois Dynasty's attempts at re-establishing control over the scattered political centres of the country were hindered by the Wars of Religion. Johann Friedrich Struensee Count Johann Friedrich Struensee (5 August 1737 – 28 April 1772) was a German doctor. He became royal physician to the mentally ill King Christian VII of Denmark and a minister in the Danish government. He rose in power to a position of "de facto" regent of the country, where he tried to carry out widespread reforms. His affair with Queen Caroline Matilda ("Caroline Mathilde") caused scandal, especially after the birth of a daughter, Princess Louise Augusta, and was the catalyst for the intrigues and power play that caused his downfall and dramatic death.

Stoicism and Pain Management: 4 Techniques Practiced By Marcus Aurelius This is a guest post by Donald Robertson. Donald is a cognitive-behavioral psychotherapist, trainer, and writer. Robertson has been tirelessly researching Stoicism and applying it in his work for twenty years. He is also the author of the remarkable new book on Marcus Aurelius, How To Think Like a Roman Emperor The Roman emperor Marcus Aurelius knew about using Stoicism to cope with chronic pain and illness. He had personal experience of doing so. Enevold Brandt Count Enevold Brandt (1738 - 28 April 1772) was a Danish courtier. Notes[edit] References[edit] "Brandt, Enevold, Count". Introduction to Philosophy/The Branches of Philosophy The Branches of Philosophy[edit] Western philosophy can be divided into six branches that have assumed various importance over time. Traditionally metaphysics sets the questions for philosophy. Epistemology asks how do we know? Ethics and politics have to do with action and quality of life.

Value pluralism Value-pluralism is a theory in metaethics, rather than a theory of normative ethics, or a set of values in itself. Oxford philosopher and historian of ideas Isaiah Berlin is credited with being the first to popularize a substantial work describing the theory of objective value-pluralism, bringing it to the attention of academia. (cf. the Isaiah Berlin Virtual Library). Learn Philosophy, from the Ancients to the Moderns, with 350 Animated Videos Philosophy is not an idle pursuit of leisured gentlemen and tenured professors, though the life circumstances of many a philosopher might make us think otherwise. The foremost example of a privileged philosopher is Marcus Aurelius, famous expositor of Stoicism, and also, incidentally, Emperor of Rome. Yet we must also bear in mind that Epictetus, the other most famous expositor of Stoicism, whom Aurelius quotes repeatedly in his Meditations, was born a slave. Against certain tendencies of modern thinking, we might hazard to believe that both men shared enough common human experience to arrive at some universal principles fully applicable to everyday life. Stoicism, after all, is nothing if not practical. Consider, for example, the emperor’s advice below—how challenging it might be for anyone, and how beneficial, not only for the individual, but—as Aurelius makes plain—for everyone.

Bernard Williams Sir Bernard Arthur Owen Williams, FBA (21 September 1929 – 10 June 2003) was an English moral philosopher, described by The Times as the "most brilliant and most important British moral philosopher of his time."[1] His publications include Problems of the Self (1973), Moral Luck (1981), Ethics and the Limits of Philosophy (1985), and Truth and Truthfulness (2002). He was knighted in 1999. He became known as a supporter of women in academia; the American philosopher Martha Nussbaum wrote that he was "as close to being a feminist as a powerful man of his generation could be".[5] He was also famously sharp in conversation. Martha Nussbaum Martha Craven Nussbaum (/ˈnʊsbaʊm/; born May 6, 1947) is an American philosopher and the current Ernst Freund Distinguished Service Professor of Law and Ethics at the University of Chicago, a chair that includes appointments in the philosophy department and the law school. She has a particular interest in ancient Greek and Roman philosophy, political philosophy, feminism, and ethics, including animal rights. She also holds associate appointments in classics, divinity and political science, is a member of the Committee on Southern Asian Studies, and a board member of the Human Rights Program. She previously taught at Harvard and Brown.[1] Nussbaum is the author or editor of a number of books, including The Fragility of Goodness (1986), Sex and Social Justice (1998), The Sleep of Reason (2002), Hiding From Humanity: Disgust, Shame, and the Law (2004), and Frontiers of Justice: Disability, Nationality, Species Membership (2006). Life and career[edit]