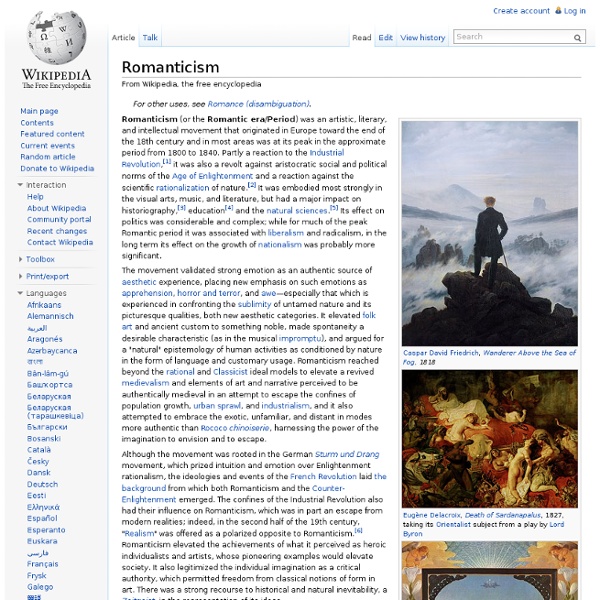 Defining Romanticism[edit] Basic characteristics[edit] Defining the nature of Romanticism may be approached from the starting point of the primary importance of the free expression of the feelings of the artist. The importance the Romantics placed on untrammelled feeling is summed up in the remark of the German painter Caspar David Friedrich that "the artist's feeling is his law".[7] To William Wordsworth poetry should be "the spontaneous overflow of powerful feelings".[8] In order to truly express these feelings, the content of the art must come from the imagination of the artist, with as little interference as possible from "artificial" rules dictating what a work should consist of. Not essential to Romanticism, but so widespread as to be normative, was a strong belief and interest in the importance of nature. The term[edit] The period[edit] The early period of the Romantic Era was a time of war, with the French Revolution (1789–1799) followed by the Napoleonic Wars until 1815.

Realism (arts) Realism in the arts may be generally defined as the attempt to represent subject matter truthfully, without artificiality and avoiding artistic conventions, implausible, exotic and supernatural elements. The term originated in the 19th century, and was used to describe the work of Gustave Courbet and a group of painters who rejected idealization, focusing instead on everyday life.[1] In its most specific sense, Realism was an artistic movement that began in France in the 1850s, after the 1848 Revolution.[2] Realists rejected Romanticism, which had dominated French literature and art since the late 18th century. Realism revolted against the exotic subject matter and exaggerated emotionalism and drama of the Romantic movement. In general, Realists depicted everyday subjects and situations in contemporary settings, and attempted to depict individuals of all social classes in a similar manner.

Ancien Régime This article is about the administrative, judicial, and ecclesiastic structures of the Kingdom of France in the pre-revolutionary period. For a general history of France in this period, see Early modern France. For the political history of France in this period, see Kingdom of France. Much of the medieval political centralization of France had been lost in the Hundred Years' War, and the Valois Dynasty's attempts at re-establishing control over the scattered political centres of the country were hindered by the Wars of Religion. The need for centralization in this period was directly linked to the question of royal finances and the ability to wage war. One key to this centralization was the replacing of personal "clientele" systems organized around the king and other nobles by institutional systems around the state.[1] The creation of the Intendants—representatives of royal power in the provinces—did much to undermine local control by regional nobles. Terminology[edit] France in 1477.

Two Concepts of Liberty "Positive liberty... is a valid universal goal. I do not know why I should have been held to doubt this, or, for that matter, the further proposition, that democratic self-government is a fundamental human need, something valuable in itself, whether or not it clashes with the claims of negative liberty or of any other goal... What I am mainly concerned to establish is that, whatever may be the common ground between them, and whatever is liable to graver distortion, negative and positive liberty are not the same thing." Isaiah Berlin, Five Essays on Liberty: An Introduction[1] "Two Concepts of Liberty" was the inaugural lecture delivered by the liberal philosopher Isaiah Berlin before the University of Oxford on 31 October 1958. "As for Otanes, he wished neither to rule nor to be ruled—the exact opposite of Aristotle's notion of true civic liberty. ... Summary[edit] Positive liberty[edit] Negative liberty[edit] Abuse of positive liberty[edit] Dialectic of positive and negative liberty[edit]