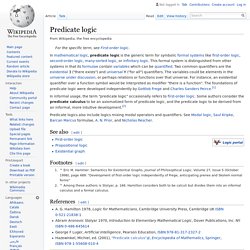 Some authors consider the predicate calculus to be an axiomatized form of predicate logic, and the predicate logic to be derived from an informal, more intuitive development.[2] Predicate logics also include logics mixing modal operators and quantifiers. See Modal logic, Saul Kripke, Barcan Marcus formulae, A. N. Prior, and Nicholas Rescher. 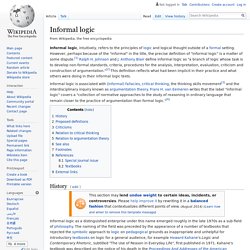 Frans H. van Eemeren writes that the label "informal logic" covers a "collection of normative approaches to the study of reasoning in ordinary language that remain closer to the practice of argumentation than formal logic. "[4] History[edit] The field perhaps became recognized under its current name with the First International Symposium on Informal Logic held in 1978. David Hitchcock argues that the naming of the field was unfortunate, and that philosophy of argument would have been more appropriate. Alongside the symposia, since 1983 the journal Informal Logic has been the publication of record of the field, with Blair and Johnson as initial editors, with the editorial board now including two other colleagues from the University of Windsor—Christopher Tindale and Hans V. Proposed definitions[edit] Mathematical logic. Formal system. Formal systems in mathematics consist of the following elements: A formal system is said to be recursive (i.e. effective) or recursively enumerable if the set of axioms and the set of inference rules are decidable sets or semidecidable sets, respectively. 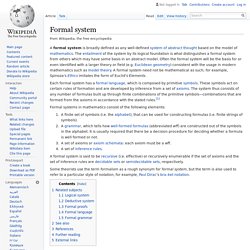 Some theorists use the term formalism as a rough synonym for formal system, but the term is also used to refer to a particular style of notation, for example, Paul Dirac's bra–ket notation. Related subjects[edit] Model theory. Gödel's completeness theorem. Gödel's completeness theorem is a fundamental theorem in mathematical logic that establishes a correspondence between semantic truth and syntactic provability in first-order logic. 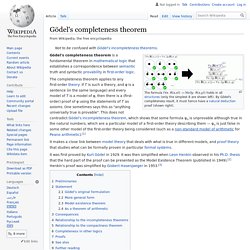 It makes a close link between model theory that deals with what is true in different models, and proof theory that studies what can be formally proven in particular formal systems. It was first proved by Kurt Gödel in 1929. It was then simplified in 1947, when Leon Henkin observed in his Ph.D. thesis that the hard part of the proof can be presented as the Model Existence Theorem (published in 1949). Henkin's proof was simplified by Gisbert Hasenjaeger in 1953. Logical consequence. Logicians make precise accounts of logical consequence regarding a given language , either by constructing a deductive system for or by formal intended semantics for language . The Polish logician Alfred Tarski identified three features of an adequate characterization of entailment: (1) The logical consequence relation relies on the logical form of the sentences, (2) The relation is a priori, i.e. it can be determined with or without regard to empirical evidence (sense experience), and (3) The logical consequence relation has a modal component.[3] Formal accounts[edit] The most widely prevailing view on how to best account for logical consequence is to appeal to formality.

All X are Y All Y are Z Therefore, all X are Z. This is in contrast to an argument like "Fred is Mike's brother's son. Inferences. Tautology (logic) Is sometimes used to denote an arbitrary tautology, with the dual symbol (falsum) representing an arbitrary contradiction. 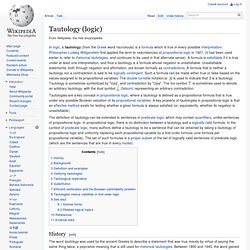 Tautologies are a key concept in propositional logic, where a tautology is defined as a propositional formula that is true under any possible Boolean valuation of its propositional variables. A key property of tautologies in propositional logic is that an effective method exists for testing whether a given formula is always satisfied (or, equivalently, whether its negation is unsatisfiable). In 1800, Immanuel Kant wrote in his book Logic: "The identity of concepts in analytical judgments can be either explicit (explicita) or non-explicit (implicita). Systems thinking. Impression of systems thinking about society[1] A system is composed of interrelated parts or components (structures) that cooperate in processes (behavior). 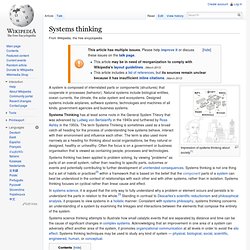 Natural systems include biological entities, ocean currents, the climate, the solar system and ecosystems. Designed systems include airplanes, software systems, technologies and machines of all kinds, government agencies and business systems. Systems Thinking has at least some roots in the General System Theory that was advanced by Ludwig von Bertalanffy in the 1940s and furthered by Ross Ashby in the 1950s.

The term Systems Thinking is sometimes used as a broad catch-all heading for the process of understanding how systems behave, interact with their environment and influence each other. Systems thinking has been applied to problem solving, by viewing "problems" as parts of an overall system, rather than reacting to specific parts, outcomes or events and potentially contributing to further development of unintended consequences. List of fallacies. Vetmeduni Vienna : Press release 02-25-2014 - The importance of (experimental) design.

02-25-2014 - One of the hottest debates in evolutionary biology concerns the origin of behaviour: is it genetically encoded or do animals and birds copy their parents or other individuals? 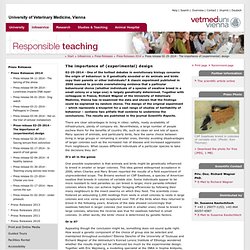 A classic experiment published in 2000 seemed to provide overwhelming evidence that a particular behavioural choice (whether individuals of a species of swallow breed in a small colony or a large one) is largely genetically determined. Together with colleagues in France, Richard Wagner of the University of Veterinary Medicine, Vienna has re-examined the data and shown that the findings could be explained by random choice.

The design of the original experiment – which represents a blueprint for a vast range of studies of heritability of behaviour – contains two pitfalls that combine to undermine the conclusions. The results are published in the journal Scientific Reports. There are clear advantages to living in cities: safety, ready availability of infrastructure, plenty of company etc.