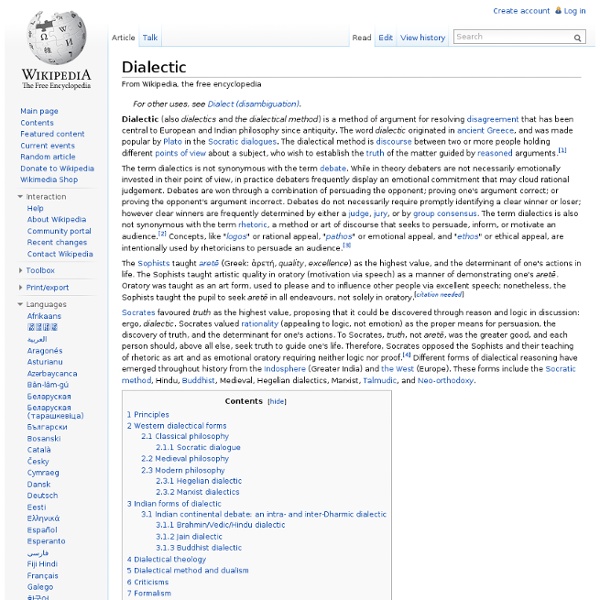 Dialectic (also dialectics and the dialectical method) is a method of argument for resolving disagreement that has been central to European and Indian philosophy since antiquity. The word dialectic originated in ancient Greece, and was made popular by Plato in the Socratic dialogues. The dialectical method is discourse between two or more people holding different points of view about a subject, who wish to establish the truth of the matter guided by reasoned arguments.[1] The term dialectics is not synonymous with the term debate. The Sophists taught aretē (Greek: ἀρετή, quality, excellence) as the highest value, and the determinant of one's actions in life. Socrates favoured truth as the highest value, proposing that it could be discovered through reason and logic in discussion: ergo, dialectic. Principles It is also possible that the rejection of the participants' presuppositions is resisted, which then might generate a second-order controversy.[7] Western dialectical forms Related:  Societal evolution

Marxism–Leninism Marxism–Leninism is a political ideology combining Marxism (the scientific socialist concepts theorised by Karl Marx and Friedrich Engels) and Leninism (Vladimir Lenin's theoretical expansions of Marxism which include anti-imperialism, democratic centralism, and Vanguardist party-building principles).[1] Marxism–Leninism was the official ideology of the Communist Party of the Soviet Union and of the Communist International (1919–43), making it the guiding ideology of the world communist movement. As such, it is the most prominent ideology associated with communism. The ultimate goal of Marxism–Leninism is the development of socialism into the full realisation of communism, a classless social system with common ownership of the means of production and with full social equality of all members of society. The phrase "Marxism–Leninism" was introduced by Joseph Stalin in the 1930s to distinguish the new synthesis of Marxism with the theories of Lenin. Values Etymology Historical Current usage

Trivium In medieval universities, the trivium comprised the three subjects that were taught first: grammar, logic and rhetoric. The word is a Latin term meaning "the three ways" or "the three roads" forming the foundation of a medieval liberal arts education. This study was preparatory for the quadrivium, which consists of geometry, arithmetic, astronomy, and music. Description[edit] Grammar is the mechanics of a language (always Latin, at the time); logic (or dialectic) is the "mechanics" of thought and analysis; rhetoric is the use of language to instruct and persuade. Grammar is the art of inventing symbols and combining them to express thought; logic is the art of thinking; and rhetoric, the art of communicating thought from one mind to another, the adaptation of language to circumstance. Another description is: Grammar is concerned with the thing as-it-is-symbolized, Logic is concerned with the thing as-it-is-known, and Rhetoric is concerned with the thing as-it-is-communicated.[2]

List of fallacies A fallacy is incorrect argument in logic and rhetoric resulting in a lack of validity, or more generally, a lack of soundness. Fallacies are either formal fallacies or informal fallacies. Formal fallacies[edit] Main article: Formal fallacy Appeal to probability – is a statement that takes something for granted because it would probably be the case (or might be the case).[2][3]Argument from fallacy – assumes that if an argument for some conclusion is fallacious, then the conclusion is false.Base rate fallacy – making a probability judgment based on conditional probabilities, without taking into account the effect of prior probabilities.[5]Conjunction fallacy – assumption that an outcome simultaneously satisfying multiple conditions is more probable than an outcome satisfying a single one of them.[6]Masked man fallacy (illicit substitution of identicals) – the substitution of identical designators in a true statement can lead to a false one. Propositional fallacies[edit]

Class conflict Class conflict, frequently referred to as class warfare or class struggle, is the tension or antagonism which exists in society due to competing socioeconomic interests and desires between people of different classes. The view that the class struggle provides the lever for radical social change for the majority is central to the work of Karl Marx and the anarchist Mikhail Bakunin. However, the discovery of the existence of class struggle is not the product of their theories; their theories can instead be seen as a response to the existence of class struggles. Usage In the past the term Class conflict was a term used mostly by socialists, who define a class by its relationship to the means of production — such as factories, land and machinery. The anarchist Mikhail Bakunin argued that the class struggle of the working class, peasantry and poor had the potential to lead to a social revolution involving the overthrow of ruling elites, and the creation of libertarian socialism. Arab Spring

False dilemma A false dilemma (also called black-and/or-white thinking, bifurcation, denying a conjunct, the either-or fallacy, false dichotomy, fallacy of exhaustive hypotheses, the fallacy of false choice, the fallacy of the false alternative, or the fallacy of the excluded middle) is a type of informal fallacy that involves a situation in which limited alternatives are considered, when in fact there is at least one additional option. The opposite of this fallacy is argument to moderation. The options may be a position that is between two extremes (such as when there are shades of grey) or may be completely different alternatives. Phrasing that implies two options (dilemma, dichotomy, black-and-white) may be replaced with other number-based nouns, such as a "false trilemma" if something is reduced to only three options, instead of two. Some philosophers and scholars believe that "unless a distinction can be made rigorous and precise it isn't really a distinction Examples[edit] Morton's Fork[edit]

Socratic method Type of dialog or debate The Socratic method is a method of hypothesis elimination, in that better hypotheses are found by steadily identifying and eliminating those that lead to contradictions. The Socratic method searches for general, commonly held truths that shape beliefs and scrutinizes them to determine their consistency with other beliefs. The basic form is a series of questions formulated as tests of logic and fact intended to help a person or group discover their beliefs about some topic; exploring definitions, and seeking to characterize general characteristics shared by various particular instances. Development[edit] In the second half of the 5th century BC, sophists were teachers who specialized in using the tools of philosophy and rhetoric to entertain, impress, or persuade an audience to accept the speaker's point of view. Method[edit] Elenchus (Ancient Greek: ἔλεγχος, romanized: elenkhos, lit. W. Application[edit] Socratic Circles[edit] Text selection[edit] Socratic Circle texts

Big Lie The Big Lie (German: Große Lüge) is a propaganda technique. The expression was coined by Adolf Hitler, when he dictated his 1925 book Mein Kampf, about the use of a lie so "colossal" that no one would believe that someone "could have the impudence to distort the truth so infamously." Hitler asserted the technique was used by Jews to unfairly blame Germany's loss in World War I on German Army officer Erich Ludendorff. Hitler's use of the expression[edit] The source of Big Lie technique is this passage, taken from Chapter 10 of James Murphy's translation of Mein Kampf: But it remained for the Jews, with their unqualified capacity for falsehood, and their fighting comrades, the Marxists, to impute responsibility for the downfall precisely to the man who alone had shown a superhuman will and energy in his effort to prevent the catastrophe which he had foreseen and to save the nation from that hour of complete overthrow and shame. Goebbels's use of the expression[edit] Holocaust[edit]