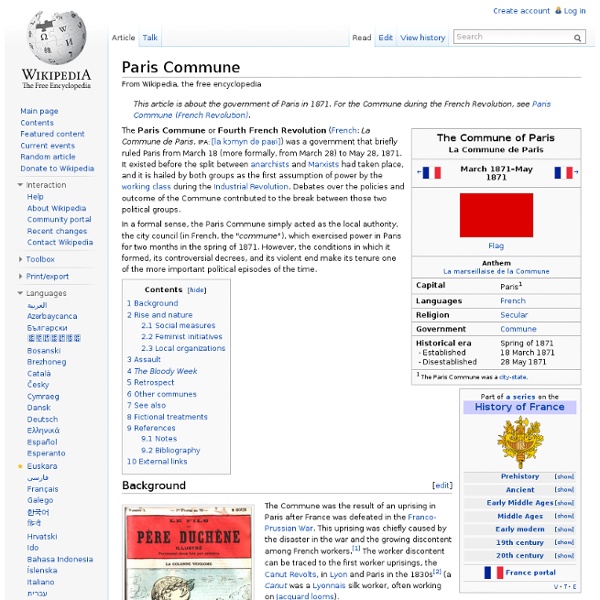 The Paris Commune (French: La Commune de Paris, IPA: [la kɔmyn də paʁi]) was a revolutionary and socialist government that briefly ruled Paris from 18 March until 28 May 1871.[3] The killing of two French army generals by soldiers of the Commune's National Guard and the refusal of the Commune to accept the authority of the French government led to its harsh suppression by the regular French Army in "La Semaine sanglante" ("The Bloody Week") beginning on 21 May 1871.[4] Debates over the policies and outcome of the Commune had significant influence on the ideas of Karl Marx and Vladimir Lenin.[5] Prelude to the Paris Commune[edit] On 2 September 1870, after his unexpected defeat at the Battle of Sedan in the Franco-Prussian War, Emperor Louis Napoleon III surrendered to the Prussian Chancellor, Otto von Bismarck. The population of Paris on the eve of Commune[edit] The radicalization of the Paris workers[edit] Radicals and revolutionaries[edit] The defenders of Paris[edit]

Flapper A flapper onboard ship (1929) Flappers were a "new breed" of young Western women in the 1920s who wore short skirts, bobbed their hair, listened to jazz, and flaunted their disdain for what was then considered acceptable behavior. Flappers were seen as brash for wearing excessive makeup, drinking, treating sex in a casual manner, smoking, driving automobiles, and otherwise flouting social and sexual norms.[1] Flappers had their origins in the liberal period of the Roaring Twenties, the social, political turbulence and increased transatlantic cultural exchange that followed the end of World War I, as well as the export of American jazz culture to Europe. Etymology[edit] The slang word flapper, describing a young woman, is sometimes supposed to refer to a young bird flapping its wings while learning to fly.

Enevold Brandt Count Enevold Brandt (1738 - 28 April 1772) was a Danish courtier. Notes[edit] References[edit] Jazz Age The Jazz Age was a feature of the 1920s (ending with The Great Depression) when jazz music and dance became popular. This occurred particularly in the United States, but also in Britain, France and elsewhere. Jazz played a significant part in wider cultural changes during the period, and its influence on pop culture continued long afterwards. Jazz music originated mainly in New Orleans, and is/was a fusion of African and European music. Value pluralism Value-pluralism is a theory in metaethics, rather than a theory of normative ethics, or a set of values in itself. Oxford philosopher and historian of ideas Isaiah Berlin is credited with being the first to popularize a substantial work describing the theory of objective value-pluralism, bringing it to the attention of academia. (cf. the Isaiah Berlin Virtual Library). The related idea that fundamental values can and, in some cases, do conflict with each other is prominent in the thought of Max Weber, captured in his notion of 'polytheism'. Context[edit] Value-pluralism is an alternative to both moral relativism and moral absolutism (which Berlin called monism).[1] An example of value-pluralism is the idea that the moral life of a nun is incompatible with that of a mother, yet there is no purely rational measure of which is preferable.

Mental breakdown Definition[edit] The terms "nervous breakdown" and "mental breakdown" have not been formally defined through a medical diagnostic system such as the DSM-IV or ICD-10, and are nearly absent from current scientific literature regarding mental illness.[1][2] Although "nervous breakdown" does not necessarily have a rigorous or static definition, surveys of laypersons suggest that the term refers to a specific acute time-limited reactive disorder, involving symptoms such as anxiety or depression, usually precipitated by external stressors.[1] Specific cases are sometimes described as a "breakdown" only after a person becomes unable to function in day-to-day life.[3] Controversy[edit] In How Everyone Became Depressed: The Rise and Fall of the Nervous Breakdown (2013), Edward Shorter, a professor of psychiatry and the history of medicine, argues for a return to the old fashioned concept of nervous illness: Take the women that you know.

Bernard Williams Sir Bernard Arthur Owen Williams, FBA (21 September 1929 – 10 June 2003) was an English moral philosopher, described by The Times as the "most brilliant and most important British moral philosopher of his time."[1] His publications include Problems of the Self (1973), Moral Luck (1981), Ethics and the Limits of Philosophy (1985), and Truth and Truthfulness (2002). He was knighted in 1999. Psychosomatic medicine Psychosomatic medicine is an interdisciplinary medical field studying the relationships of social, psychological, and behavioral factors on bodily processes and quality of life in humans and animals. The academic forebear of the modern field of behavioral medicine and a part of the practice of consultation-liaison psychiatry, psychosomatic medicine integrates interdisciplinary evaluation and management involving diverse specialties including psychiatry, psychology, neurology, internal medicine, surgery, allergy, dermatology and psychoneuroimmunology. Clinical situations where mental processes act as a major factor affecting medical outcomes are areas where psychosomatic medicine has competence.[1] History of psychosomatics[edit]

Martha Nussbaum Martha Craven Nussbaum (/ˈnʊsbaʊm/; born May 6, 1947) is an American philosopher and the current Ernst Freund Distinguished Service Professor of Law and Ethics at the University of Chicago, a chair that includes appointments in the philosophy department and the law school. She has a particular interest in ancient Greek and Roman philosophy, political philosophy, feminism, and ethics, including animal rights. She also holds associate appointments in classics, divinity and political science, is a member of the Committee on Southern Asian Studies, and a board member of the Human Rights Program. She previously taught at Harvard and Brown.[1] Nussbaum is the author or editor of a number of books, including The Fragility of Goodness (1986), Sex and Social Justice (1998), The Sleep of Reason (2002), Hiding From Humanity: Disgust, Shame, and the Law (2004), and Frontiers of Justice: Disability, Nationality, Species Membership (2006).