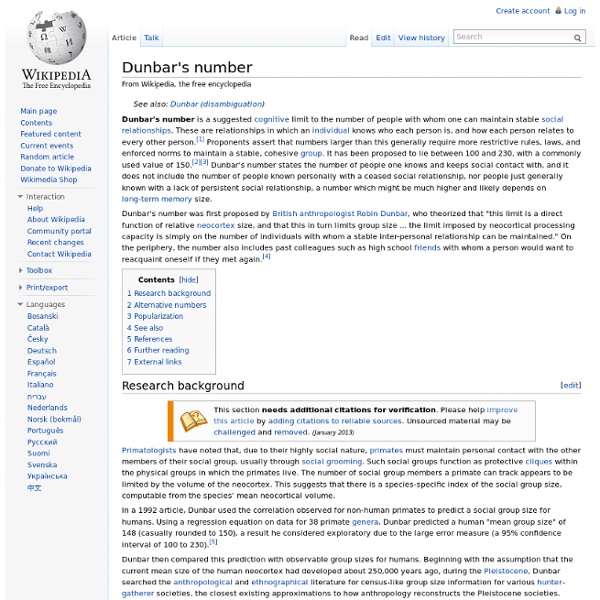 Dunbar's number is a suggested cognitive limit to the number of people with whom one can maintain stable social relationships. These are relationships in which an individual knows who each person is and how each person relates to every other person.[1][2][3][4][5][6] This number was first proposed by British anthropologist Robin Dunbar, who found a correlation between primate brain size and average social group size. By using the average human brain size and extrapolating from the results of primates, he proposed that humans can only comfortably maintain 150 stable relationships.[7] Proponents assert that numbers larger than this generally require more restrictive rules, laws, and enforced norms to maintain a stable, cohesive group. Research background[edit] Primatologists have noted that, due to their highly social nature, primates must maintain personal contact with the other members of their social group, usually through social grooming. Alternative numbers[edit] Anthropologist H.

Caring doesn't scale We are social creatures. We align ourselves in groups made of family, friends, co-workers, neighbors, etc. When we have similar interests in activities, beliefs, political leanings and shared experiences, these bonds are strong. When we occasionally bump into the same people on our way to work, we might smile and say hello, but these are much shallower interactions.

DNA Doppelganger Dilemma By Robert Whiston FRSA; 21st Aug 2004; updated version 2.01: Sept 2007 Forensic DNA testing has been trumpeted as unerringly accurate. It has relied for this on the inherent “uniqueness” of DNA. It therefore comes as a shock to realise that aspects within forensic DNA testing are far from unique and far from reliable. DNA, as the public is learning, is not robust and it deteriorates easily and quickly. A purported new mathematics proof is impenetrable – now what? What happens when someone claims to have proved a famous conjecture? Well, it depends. When a paper is submitted, the journal editor will pass it off to a respected expert for examination. That referee will then scan the paper looking for a significant new idea. If there isn’t one, then the whole argument is unlikely to get much more scrutiny. But if there is a kernel of a new approach, it will be checked carefully.

Dudes Are Doomed (Part I): The Y Chromosome Part one of seven part series. View parts two, three, four and five here. This is part of an ongoing series on Sex and Science. Scientific knowledge is constantly changing, — particularly Genetics, which is in its infancy. Oxytocin Changes Everything What does petting a cat, hugging a friend, deep breathing, a walk in the woods, and giving away money to someone have in common? These are but a few ways to release the hormone of love and connection, Oxytocin. We humans are like puppets on strings.

Göreme Göreme (pronounced [ˈɟøɾeme]; Ancient Greek: Κόραμα, Kòrama), located among the "fairy chimney" rock formations, is a town in Cappadocia, a historical region of Turkey. It is in the Nevşehir Province in Central Anatolia and has a population of around 2,000 people.[1] Former names of the town have been Korama, Matiana, Maccan or Machan, and Avcilar.[2] When Göreme Valley nearby was designated an important tourist destination, a "center" for all tourism in Cappadocia, the name of the town was changed to Göreme for practical reasons. The Göreme National Park (tr) (Göreme Tarihî Millî Parkı in Turkish) was added to the UNESCO World Heritage List in 1985.[1] Doppelgangers Take DNA Test to Find Out If They're Related, 'Surprised' by Results Two twin strangers from Ireland -- who never knew the other existed until two months ago -- recently took a DNA test to find out if they were related. The results "absolutely surprised" the both of them, according to Niamh Geaney, who added that she and her doppelganger Irene Adams "couldn't believe" the results. Geaney -- who's from Dublin, Ireland -- told ABC News today she first connected with Adams -- who's from Sligo, Ireland -- this past November after a friend of Adams' told her she looked like "that doppelganger girl on the news." Coincidentally, a friend of Adams' brother also contacted Geaney around the same time. "We got in touch, met up and it was absolutely surreal to see yet another one of my doppelgangers in the flesh," said Geaney, 27. She explained that Adams, 28, is actually the third doppelganger she's discovered so far since creating Twin Strangers, a website and tool that uses facial recognition software to match you to a potential lookalike.

Why we shouldn’t judge a country by its GDP Analysts, reporters and big thinkers love to talk about Gross Domestic Product. Put simply, GDP, which tallies the value of all the goods and services produced by a country each year, has become the yardstick by which we measure a country’s success. But there’s a big, elephant-like problem with that: GDP only accounts for a country’s economic performance, not the happiness or well-being of its citizens. With GDP, if your richest 100 people get richer, your GDP rises … but most of your citizens are just as badly off as they were before. London Review Bookshop Located in the heart of Bloomsbury, just a Rosetta Stone’s throw from the British Museum, the London Review Bookshop has established itself as an essential part of the capital’s cultural life. Opened in 2003 by the London Review of Books, it’s a place for people who love books to meet, talk, drink excellent tea and coffee, consume delicious cake, and of course, browse. Our selection of more than 20,000 titles ranges from the classics of world literature to the cutting edge of contemporary fiction and poetry, not forgetting a copious display of history, politics, philosophy, cookery, essays and children’s books. And our lovely shop, designed by Amanda Culpin of utility, provides the perfect setting in which to explore them all. Our aim has always been to represent on our shelves the distinctive ethos of the Review – intelligent without being pompous; engaged without being partisan. Don’t just take our word for it.

Microscopic 'Tuning Forks' Could Make the Difference Between Life and Death in the Hospital A patient admitted to a hospital with a serious bacterial infection may have only a few hours to live. Figuring out which antibiotic to administer, however, can take days. Doctors must grow the microbes in the presence of the drugs and see whether they reproduce.

Mathematicians have discovered a strange pattern hiding in prime numbers Mathematicians are pretty obsessed with prime numbers - those elusive integers that can only be divided by one and themselves. If they're not creating cool artworks with them or finding them in nature, they're using computers to discover increasingly larger primes. But now a group of researchers has found a strange property of primes that's never been seen before, and it violates one of the fundamental assumptions about how they behave - the idea that, for the most part, they occur totally randomly across integers. The pattern isn't actually found within the primes themselves, but rather the final digit of the prime number that comes directly after them - which the mathematicians have shown isn't as random as you'd expect, and that's a pretty big deal for mathematicians. "We’ve been studying primes for a long time, and no one spotted this before," Andrew Granville, a number theorist at the University of Montreal who wasn't involved in the study, told Quanta magazine. "It’s crazy."