Michael's Education: November 2010. LESSON 3 d Inference is a process by which a conclusion is drawn from a valid sequence and relationship of premises. 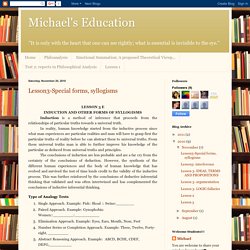 Kinds of inference 1. Inductive inference. A form of reasoning that proceeds from particular premises to a general conclusion. 2. The Logic Cafe. Logic. 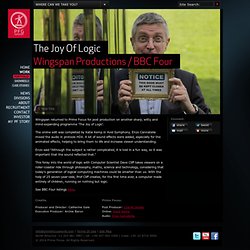 The online edit was completed by Katie Kemp in Avid Symphony. Enzo Cannatella mixed the audio in protools HDX. A lot of sound effects were added, especially for the animated effects, helping to bring them to life and increase viewer understanding. Enzo said “Although the subject is rather complicated, it is told in a fun way, so it was important that the sound reflected that.” This foray into the world of logic with Computer Scientist Dave Cliff takes viewers on a roller-coaster ride through philosophy, maths, science and technology, considering that today's generation of logical computing machines could be smarter than us. 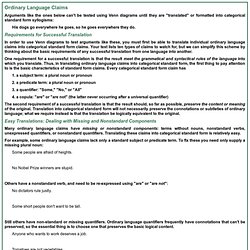 Requirements for Successful Translation In order to use Venn diagrams to test arguments like these, you must first be able to translate individual ordinary language claims into categorical standard form claims. Your text lists ten types of claims to watch for, but we can simplify this scheme by thinking about the basic requirements of any successful translation from one language into another. 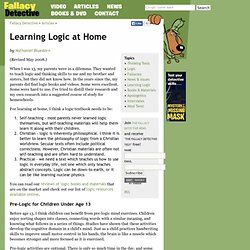 When I was 13, my parents were in a dilemma. They wanted to teach logic and thinking skills to me and my brother and sisters, but they did not know how. In the years since the, my parents did find logic books and videos. Some were excellent. For learning at home, I think a logic textbook needs to be: Self-teaching - most parents never learned logic themselves, but self-teaching materials will help them learn it along with their children.

Disjunctive not-both xor syllogism. Presentations/teaching. Random. Logic, enthusiasms, sceptical thoughts, and a little LaTeX geekery. The Self-Paced Logic Project: Study guides. To give a sense of the content of the course as taught in 2002, here are the study guides for all six units. 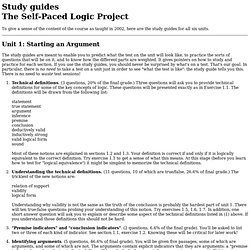 Unit 1: Starting an Argument The study guides are meant to enable you to predict what the test on the unit will look like, to practice the sorts of questions that will be on it, and to know how the different parts are weighted. It gives pointers on how to study and practice for each section. If you use the study guides, you should never be surprised by what's on a test. That's our goal. Technical definitions. (3 questions, 20% of the final grade.) Unit 2: Testing Validity Validity seems like hocus-pocus until you understand the notion of logical form and learn how to test "whether a logical form has any substitution instances in which all the premises are true but the conclusion false".

Warning: the test for Unit 2 will take considerably more time than that for Unit 1! Logical forms and substitution instances. (8 questions, 10.9% of final grade). Teach Yourself Logic: A Study Guide, and other book notes. Most philosophy departments, and many maths departments too, teach little or no serious logic, despite the centrality of the subject. 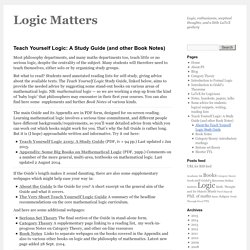 Many students will therefore need to teach themselves, either solo or by organizing study groups. But what to read? Students need annotated reading lists for self-study, giving advice about the available texts.

Aristotle: Logic [Internet Encyclopedia of Philosophy] Aristotelian logic, after a great and early triumph, consolidated its position of influence to rule over the philosophical world throughout the Middle Ages up until the 19th Century. 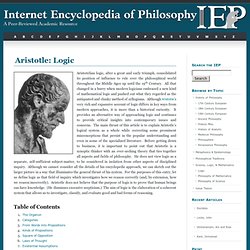 All that changed in a hurry when modern logicians embraced a new kind of mathematical logic and pushed out what they regarded as the antiquated and clunky method of syllogisms. Although Aristotle’s very rich and expansive account of logic differs in key ways from modern approaches, it is more than a historical curiosity. It provides an alternative way of approaching logic and continues to provide critical insights into contemporary issues and concerns.

The main thrust of this article is to explain Aristotle’s logical system as a whole while correcting some prominent misconceptions that persist in the popular understanding and even in some of the specialized literature. Logic Module. Instructional publishing for logicians. How to read logical notation. Propositonal Connectives The first set of symbols we are going to introduce you to are called propositional connectives because they combine with one proposition, or combine two propositons, to make a new one. 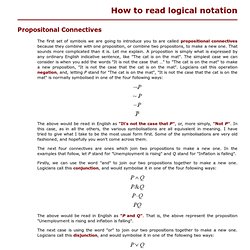 That sounds more complicated than it is. Let me explain. A proposition is simply what is expressed by any ordinary English indicative sentence, like "The cat is on the mat". PrinterFriendlyViewPack. Table of logic symbols. 11 Recent IPOs At Risk Of Running Out Of CashHis logic compels me to dig in and look at which companies are most vulnerable to a shutdown in capital markets. 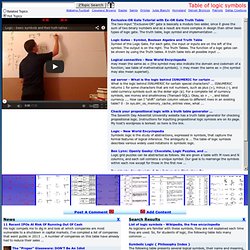 I've compiled a list of companies that went public in 2013 ... A number of companies on this table have already had to reduce their sales ... The “Proper” Glassware: DON'T Be An IdiotI do know that several of the reps requested that I not tell customers my conclusions, as they felt that the company's reputation precluded having some logic-resistant weasel like me out there counter-pointing their mountains of scientific evidence. 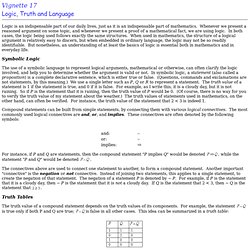 Symbolic logic : Carroll, Lewis, 1832-1898. The Age of the Universe, Part 1. Hardegree - Philosophy 110. Symbolic Logic. Symbolic logic is the method of representing logical expressions through the use of symbols and variables, rather than in ordinary language. This has the benefit of removing the ambiguity that normally accompanies ordinary languages, such as English, and allows easier operation. There are many systems of symbolic logic, such as classical propositional logic, first-order logic and modal logic. Each may have seperate symbols, or exclude the use of certain symbols.

Logical Symbols The following table presents several logical symbols, their name and meaning, and any relevant notes. Propositions, Variables and Non-Logical Symbols. Unurthed. Eight diagrams by Lewis Carroll (of Alice’s Adventures in Wonderland) from his 1897 Symbolic Logic, in which Carroll presents a symbolic method of representing propositions and visually deriving the logical outcomes of syllogisms, fallacies, and soriteses. “First, let us suppose that the above [Biliteral] Diagram is an enclosure assigned to a certain Class of Things, which we have selected as our ‘Universe of Discourse,’ or, more briefly, as our ‘Univ’.

“Secondly, let us suppose that we have selected a certain Adjunct, which we may call x, and have divided the large Class, to which we have assigned the whole Diagram, into the two smaller Classes whose Differentiæ are x and not-x (which we may call x’), and that we have assigned the North Half of the Diagram to the one (which we may call… the x-Class), and the South Half to the other (which we may call… the x’-Class). By this formula we can visually represent the following propositions (p34, 35): If “Univ. How to read logical notation. LOGIC: Informal, Symbolic and Inductive - CHHANDA CHAKRABORTI. Introduction to Symbolic Logic. Module: Basic logic. The term "logic" is often used in many different ways. It is sometimes understood broadly as the systematic study of the principles of good reasoning. As such logic is not very different from critical thinking.

But sometimes "logic" is understood more narrowly as what we might call "deductive logic". Roughly speaking, deductive logic is mainly about the consistency of statements and beliefs, as well as the validity of arguments. These are the topics we shall investigate in the following modules. Tutorials in this module. Philosophy at RBJones.com. How to Read and Understand Philosophy. Philosophical Disquisitions: Mizrahi on The Argument from Natural Inequality (Part One) Traditionally the argument from evil has focused on two main categories of evil: natural evil and moral evil. Non-theists have well-known arguments for thinking that the existence of both kinds of evil provides reasons for disbelieving in theism. At the same time, theists have well-known responses to these arguments.

Although I would hardly call the debate between both sides a stalemate, it is stale in the intellectual sense: I'm not sure there is much more to be learned about the reasons for supporting one side or another at this stage. That's why I am intrigued by a recent trend in the philosophical literature on the argument from evil. Philosophy 101. Category:Philosophy. Stanford Encyclopedia of Philosophy. Philosophy Research Guide. VORTEX Portal.