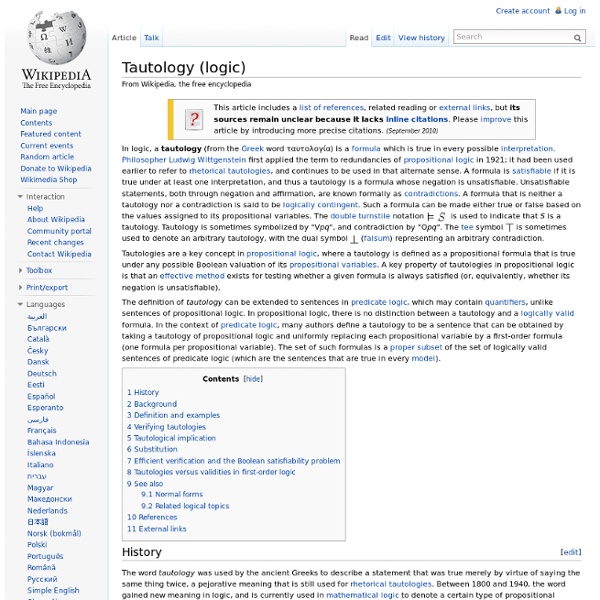 is sometimes used to denote an arbitrary tautology, with the dual symbol (falsum) representing an arbitrary contradiction. Tautologies are a key concept in propositional logic, where a tautology is defined as a propositional formula that is true under any possible Boolean valuation of its propositional variables. In 1800, Immanuel Kant wrote in his book Logic: "The identity of concepts in analytical judgments can be either explicit (explicita) or non-explicit (implicita). Here analytic proposition refers to an analytic truth, a statement in natural language that is true solely because of the terms involved. In 1884, Gottlob Frege proposed in his Grundlagen that a truth is analytic exactly if it can be derived using logic. In 1921, in his Tractatus Logico-Philosophicus, Ludwig Wittgenstein proposed that statements that can be deduced by logical deduction are tautological (empty of meaning) as well as being analytic truths. and representing negation, the following formula can be obtained:: .

Tautology (rhetoric) Rhetorical tautologies state the same thing twice, while appearing to state two or more different things, while logical tautologies state the same thing twice and must do so by logical necessity. The inherent meanings and subsequent conclusions in rhetorical and logical tautologies or logical necessities are very different. Logical tautologies are neither refutable nor verifiable under any condition by axiomatic necessity. All world views contain circularity in terms of the Münchhausen_trilemma or Bootstrapping trilemma. In both the phrases "raising the question" and "begging the question" the same term 'question' is used as a dissimilar reference to premise and conclusion respectively. Figures of Speech: Tautology

Tautology From Wikipedia, the free encyclopedia Tautology may refer to: Tautology (rule of inference) In propositional logic, tautology is one of two commonly used rules of replacement.[1][2][3] The rules are used to eliminate redundancy in disjunctions and conjunctions when they occur in logical proofs. They are: The principle of idempotency of disjunction: and the principle of idempotency of conjunction: Where " Theorems are those logical formulas where is the conclusion of a valid proof,[4] while the equivalent semantic consequence indicates a tautology. The tautology rule may be expressed as a sequent: and is a metalogical symbol meaning that is a syntactic consequence of , in the one case, in the other, in some logical system; or as a rule of inference: where the rule is that wherever an instance of " " or " " appears on a line of a proof, it can be replaced with " or as the statement of a truth-functional tautology or theorem of propositional logic. is a proposition expressed in some logical system. Jump up ^ Hurley, Patrick (1991).

Lexicon Formally, in linguistics, a lexicon is a language's inventory of lexemes. The word "lexicon" derives from the Greek λεξικόν (lexicon), neuter of λεξικός (lexikos) meaning "of or for words".[1] Linguistic theories generally regard human languages as consisting of two parts: a lexicon, essentially a catalogue of a language's words (its wordstock); and a grammar, a system of rules which allow for the combination of those words into meaningful sentences. The lexicon is also thought to include bound morphemes, which cannot stand alone as words (such as most affixes). In some analyses, compound words and certain classes of idiomatic expressions and other collocations are also considered to be part of the lexicon. Dictionaries represent attempts at listing, in alphabetical order, the lexicon of a given language; usually, however, bound morphemes are not included. Size and organization[edit] Lexicalization and other mechanisms in the lexicon[edit] The mechanisms, not mutually exclusive, are:[4]

Taxonomy (general) Taxonomy is the practice and science of classification. The word is also used as a count noun: a taxonomy, or taxonomic scheme, is a particular classification. The word finds its roots in the Greek τάξις, taxis (meaning 'order', 'arrangement') and νόμος, nomos ('law' or 'science'). Many taxonomies have a hierarchical structure, but this is not a requirement. Wikipedia categories illustrate a taxonomy[1] and a full taxonomy of Wikipedia categories can be extracted by automatic means.[2] Recently, it has been shown that a manually-constructed taxonomy, such as that of computational lexicons like WordNet, can be used to improve and restructure the Wikipedia category taxonomy.[3] Mathematically, a hierarchical taxonomy is a tree structure of classifications for a given set of objects. In contrast, in a context of legal terminology, an open-ended contextual taxonomy—a taxonomy holding only with respect to a specific context.

Ontology (information science) In computer science and information science, an ontology formally represents knowledge as a hierarchy of concepts within a domain, using a shared vocabulary to denote the types, properties and interrelationships of those concepts.[1][2] Ontologies are the structural frameworks for organizing information and are used in artificial intelligence, the Semantic Web, systems engineering, software engineering, biomedical informatics, library science, enterprise bookmarking, and information architecture as a form of knowledge representation about the world or some part of it. The creation of domain ontologies is also fundamental to the definition and use of an enterprise architecture framework. The term ontology has its origin in philosophy and has been applied in many different ways. What many ontologies have in common in both computer science and in philosophy is the representation of entities, ideas, and events, along with their properties and relations, according to a system of categories.

Generic Model Organism Database Generic Model Organism Database project logo The Generic Model Organism Database (GMOD) project provides biological research communities with a toolkit of open-source software components for visualizing, annotating, managing, and storing biological data. The GMOD project is funded by the United States National Institutes of Health, National Science Foundation and the USDA Agricultural Research Service. History[edit] The GMOD project was started in the early 2000s as a collaboration between several model organisms databases (MODs) who shared a need to create similar software tools for processing data from sequencing projects. MODs, or organism-specific databases, describe genome and other information about important experimental organisms in the life sciences and capture the large volumes of data and information being generated by modern biology. An important part of the GMOD project is ensuring that the software components are interoperable. Chado database schema[edit] Software[edit]