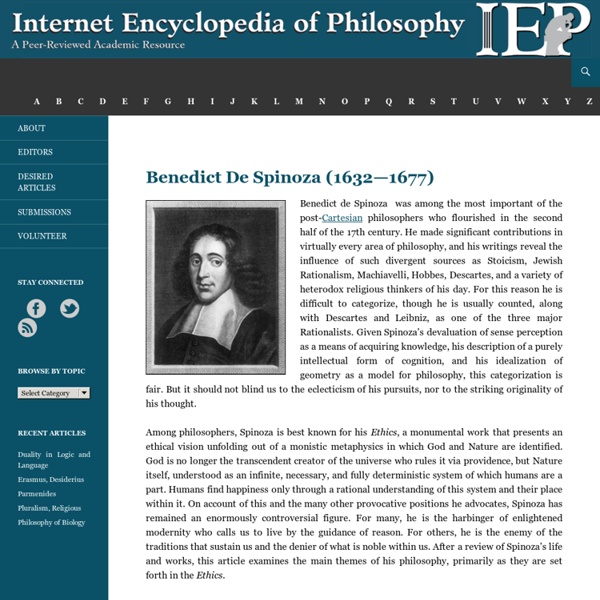 Benedict de Spinoza was among the most important of the post-Cartesian philosophers who flourished in the second half of the 17th century. He made significant contributions in virtually every area of philosophy, and his writings reveal the influence of such divergent sources as Stoicism, Jewish Rationalism, Machiavelli, Hobbes, Descartes, and a variety of heterodox religious thinkers of his day. For this reason he is difficult to categorize, though he is usually counted, along with Descartes and Leibniz, as one of the three major Rationalists. Among philosophers, Spinoza is best known for his Ethics, a monumental work that presents an ethical vision unfolding out of a monistic metaphysics in which God and Nature are identified. Table of Contents 1. Spinoza came into the world a Jew. The young Spinoza, given the name Baruch, was educated in his congregation's academy, the Talmud Torah school. Spinoza's intellectual reorientation, however, came at a cost. 2. 3. a. i. ii. iii. b. i. ii. Related:  Philosophy and Logic

Aristotle Biography The Early Years Aristotle, the greatest and most influential of all the Greek philosophers, was born in 384 BC in the town of Stageria (near Macedonia, on the northern peninsula of Greece). His father, Nicomachus, was a friend and physician to King Amyntas of Macedonia. Nicomachus belonged to a large family of physicians and healers who are believed to hold this position under various kings of Macedonia. As a boy, Aristotle most likely watched his father treating patients and making medicines from parts of plants and animals. Aristotle's parents died when he was just a boy, ending his plans to take up medicine. The Academy In 367 BC, when Aristotle was seventeen, he left Stageria to study at Plato's Academy in Athens, the heart of the intellectual world at the time. The Academy encouraged their students to let their minds and thoughts roam free. As Aristotle's own knowledge increased, he began to question Plato's views and methods of the Academy. The First Naturalist Tutor to the Great

Emergent materialism In the philosophy of mind, emergent (or emergentist) materialism is a theory which asserts that the mind is an irreducible existent in some sense, albeit not in the sense of being an ontological simple, and that the study of mental phenomena is independent of other sciences. The view can be divided into emergence which denies mental causation and emergence which allows for causal effect. A version of the latter type has been advocated by John R. Searle, called biological naturalism. See also[edit] External links[edit] M.D.

The Civilized Explorer HYLE 20-1 (2014): Whole-Parts Strategies in Quantum Chemistry: Some Philosophical and Mereological Lessons Jean-Pierre Llored* Abstract: Philosophers mainly refer to quantum chemistry in order to address questions about the reducibility or autonomy of chemistry relative to quantum physics, and to argue for or against ontological emergence. To make their point, they scrutinize quantum approximations and formalisms as if they were independent of the questions at stake. This paper proposes a return to history and to the laboratory so as to emphasize how quantum chemists never cease to negotiate the relationships between a molecule, its parts, and its environment. This investigation will enable us to draw methodological conclusions about the role of history within philosophical studies, and to examine how quantum chemistry can clarify important philosophical and mereological issues related to the emergence/reduction debate, or to the way instruments and contexts are involved in the material making and the formal description of wholes and parts. 1. We divide our work into four parts. 2. 3. 4. 5.

Uses and Misuses of Logic. Introduction This document contains observations on the uses and misuses of logic, particularly in the sciences. Along the way we'll wander into the murky realms of absolute and proximate truths, deduction and induction and address the question of how we can have confidence in knowledge that is less than perfect. We will use certain terms as scientists use them. For those not familiar with the language of science, we include here some fundamentals, so we'll all be starting with the same language. Fact. Induction and deduction Science proceeds from facts to laws to theories by a difficult-to-define process called induction. Theories and laws are required to be of such form that one can deductively proceed from theories to laws to data. Mathematics is a process of deductive logic. This diagram shows the relations between facts, laws, and theories, and the role of induction and deduction. Quotes about logic Logic is the art of going wrong with confidence. Joseph Wood Krutch Elbert Hubbard H.

Great Philosophers: Hypatia Aristotle: Laws of Thought Philosophy as laws of thought Aristotle was the first person to investigate the patterns and processing of reason. He discovered (some would say invented) logic. For that alone, he counts high in the pantheon of the most influential people in history. Logic provides the basis for proof and demonstration using natural language. Aristotle wrote several extensive works on logic, which taken together are known as The Organon or the instrument, by which which he meant that logic is an instrument for advancing knowledge. Aristotle was not merely pointing out ways that people should think; he was describing the fundamental principles by which thought can occur at all. 1. Everything is the same as itself; or a statement cannot not remain the same and change its truth value. 2. Nothing can both exist and not exist at the same time and in the same respect; or no statement is both true and false. 3. Next - Learn about Aristotle's Syllogisms

How are assumptions important in the critical thinking process? Critical thinking requires using logic, but logic is dependent upon accepting premises. These premises are often called assumptions. Some premises are ironclad, such as assuming that an object dropped on Earth will fall and land safe. However, correct assumptions are not always necessary to the critical thinking process. While debating and discussing ideas, people sometimes operate from differing assumptions, and these can cause debates to stagnate. Learn more about Psychology Distinguishing Between Inferences and Assumptions To be skilled in critical thinking is to be able to take one’s thinking apart systematically, to analyze each part, assess it for quality and then improve it. The first step in this process is understanding the parts of thinking, or elements of reasoning. These elements are: purpose, question, information, inference, assumption, point of view, concepts, and implications. In this article we focus on two of the elements of reasoning: inferences and assumptions. Inference: An inference is a step of the mind, an intellectual act by which one concludes that something is true in light of something else’s being true, or seeming to be true. We humans naturally and regularly use our beliefs as assumptions and make inferences based on those assumptions. If you put humans in any situation, they start to give it some meaning or other. As we write, we make inferences as to what readers will make of what we are writing. This is to say that we must choose among a variety of possible meanings.