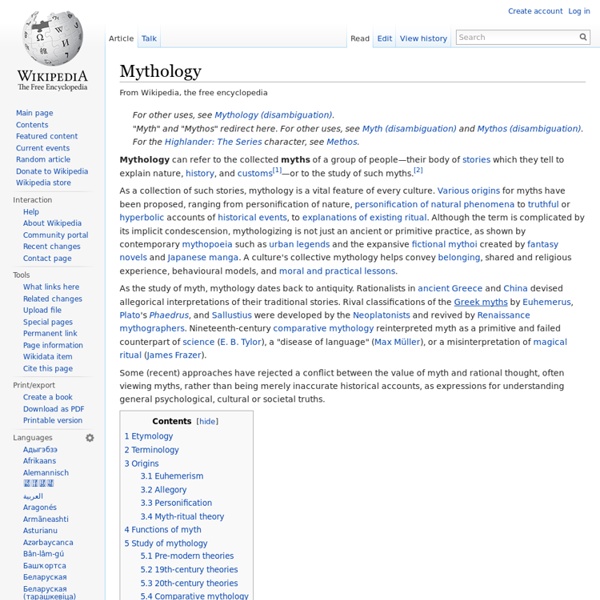 Some (recent) approaches have rejected a conflict between the value of myth and rational thought, often viewing myths, rather than being merely inaccurate historical accounts, as expressions for understanding general psychological, cultural or societal truths. Etymology[edit] The English term mythology predates the word myth by centuries.[5] It appeared in the 15th century,[7] borrowed whole from Middle French mythologie. The word mythology "exposition of myths" comes from Middle French mythologie, from Late Latin mythologia, from Greek μυθολογία mythologia "legendary lore, a telling of mythic legends; a legend, story, tale," from μῦθος mythos "myth" and -λογία -logia "study."[8][9] Both terms translated the subject of Fulgentius's 5th-century Mythologiæ, which was concerned with the explication of Greek and Roman stories about their gods. Terminology[edit] Origins[edit] Euhemerism[edit] Allegory[edit] Some theories propose that myths began as allegories. Personification[edit] See also[edit]

Ignorance Ignorance is a state of being uninformed (lack of knowledge).[1] The word ignorant is an adjective describing a person in the state of being unaware and is often used as an insult to describe individuals who deliberately ignore or disregard important information or facts. Ignoramus is commonly used in the UK, Ireland, and the US as a term for someone who is willfully ignorant. Ignorance is distinguished from stupidity, although both can lead to "unwise" acts. Writer Thomas Pynchon articulated about the scope and structure of one's ignorance: "Ignorance is not just a blank space on a person's mental map. The legal principle that ignorantia juris non excusat, literally "ignorance of the law is no excuse", stands for the proposition that the law applies also to those who are unaware of it. Consequences[edit] Individuals with superficial knowledge of a topic or subject may be worse off than people who know absolutely nothing. See also[edit] References[edit] Jump up ^ Wordnet.

Reality Not to be confused with Realty. Philosophers, mathematicians, and other ancient and modern thinkers, such as Aristotle, Plato, Frege, Wittgenstein, and Russell, have made a distinction between thought corresponding to reality, coherent abstractions (thoughts of things that are imaginable but not real), and that which cannot even be rationally thought. By contrast existence is often restricted solely to that which has physical existence or has a direct basis in it in the way that thoughts do in the brain. Reality is often contrasted with what is imaginary, delusional, (only) in the mind, dreams, what is false, what is fictional, or what is abstract. At the same time, what is abstract plays a role both in everyday life and in academic research. For instance, causality, virtue, life, and distributive justice are abstract concepts that can be difficult to define, but they are only rarely equated with pure delusions. The truth refers to what is real, while falsity refers to what is not. Being

Cybernetics Cybernetics is a transdisciplinary[1] approach for exploring regulatory systems, their structures, constraints, and possibilities. Cybernetics is relevant to the study of systems, such as mechanical, physical, biological, cognitive, and social systems. Cybernetics is applicable when a system being analyzed incorporates a closed signaling loop; that is, where action by the system generates some change in its environment and that change is reflected in that system in some manner (feedback) that triggers a system change, originally referred to as a "circular causal" relationship. Some say this is necessary to a cybernetic perspective. System dynamics, a related field, originated with applications of electrical engineering control theory to other kinds of simulation models (especially business systems) by Jay Forrester at MIT in the 1950s. Norbert Wiener defined cybernetics in 1948 as "the scientific study of control and communication in the animal and the machine Definitions[edit] W. General

Cyberpunk William Gibson's Sprawl trilogy novels are famous early cyberpunk novels. Cyberpunk is a subgenre of science fiction in a future setting, noted for its focus on "high tech and low life".[1][2] It features advanced technology and science, such as information technology and cybernetics, coupled with a degree of breakdown or radical change in the social order.[3] Classic cyberpunk characters were marginalized, alienated loners who lived on the edge of society in generally dystopic futures where daily life was impacted by rapid technological change, an ubiquitous datasphere of computerized information, and invasive modification of the human body.—Lawrence Person[7] Style and ethos[edit] Primary exponents of the cyberpunk field include William Gibson, Neal Stephenson, Bruce Sterling, Pat Cadigan, Rudy Rucker, and John Shirley.[8] Setting[edit] Shibuya, Tokyo.[11] Of Japan's influence on the genre, William Gibson said, "Modern Japan simply was cyberpunk Protagonists[edit] Media[edit] Literature[edit]

Rationality Determining optimality for rational behavior requires a quantifiable formulation of the problem, and making several key assumptions. When the goal or problem involves making a decision, rationality factors in how much information is available (e.g. complete or incomplete knowledge). Collectively, the formulation and background assumptions are the model within which rationality applies. Illustrating the relativity of rationality: if one accepts a model in which benefitting oneself is optimal, then rationality is equated with behavior that is self-interested to the point of being selfish; whereas if one accepts a model in which benefiting the group is optimal, then purely selfish behavior is deemed irrational. Theories of rationality[edit] Max Weber[edit] The German sociologist Max Weber proposed an interpretation of social action that distinguished between four different idealized types of rationality. Psychology of reasoning[edit] Richard Brandt[edit] Quality of rationality[edit]

Deference Politics[edit] Smolenski (2005) examines deference in colonial Pennsylvania, to see how claims to political authority were made, justified, and accepted or rejected. He focuses on the "colonial speech economy," that is, the implicit rules that determined who was allowed to address whom and under what conditions, and describes how the qualities that inspired deference changed in the province from 1691 to 1764. The Quaker elite initially established a monopoly on political leadership based on what they believed to be their inherent civic virtue grounded in their religious and social class. Sociology[edit] Erving Goffman, a Canadian-born sociologist and writer, explored the relationship between deference and demeanor in his 1967 essay "The Nature of Deference and Demeanor".[3] According to Goffman, a person with a poor demeanor will be held in lower esteem in the eyes of society. Psychology[edit] See also[edit] References[edit] Jump up ^ John B. Further reading[edit]

Autonomism (political doctrine) Autonomism is a doctrine which supports acquiring or preserving political autonomy of a nation or a region. It is not necessarily opposed to federalism, quite to the contrary. Having said that, souverainism necessarily implies autonomism, but not vice versa. Examples of autonomist parties include Action démocratique du Québec in Canada (Quebec), New Democratic Macau Association in China (Macau), Parti progressiste martiniquais (Martinique) in France, Scottish National Party in the United Kingdom, Lega Nord in Italy (Northern Italy) and Popular Democratic Party of Puerto Rico in the United States (Puerto Rico). Autonomism is a policy defended by the Action démocratique du Québec (ADQ), a provincial party which aims to obtain certain federal capacities and to give the title of autonomous State to the province of Quebec. The Autonomous Communities of Spain may demonstrate the doctrine although it is limited in its extent.[1] Jump up ^ Muhammad Aurang Zeb Mughal (2012) 'Spain'.

Free will Though it is a commonly held intuition that we have free will,[3] it has been widely debated throughout history not only whether that is true, but even how to define the concept of free will.[4] How exactly must the will be free, what exactly must the will be free from, in order for us to have free will? Historically, the constraint of dominant concern has been determinism of some variety (such as logical, nomological, or theological), so the two most prominent common positions are named incompatibilist or compatibilist for the relation they hold to exist between free will and determinism. In Western philosophy[edit] The underlying issue is: Do we have some control over our actions, and if so, what sort of control, and to what extent? On one hand, humans have a strong sense of freedom, which leads us to believe that we have free will.[13][14] On the other hand, an intuitive feeling of free will could be mistaken.[15][16] Incompatibilism[edit] Using T, F for "true" and "false" and ? [edit]

Noumenon Etymology[edit] The Greek word noumenon (νοούμενoν), plural noumena (νοούμενα), is the middle-passive present participle of νοεῖν (noein), "I think, I mean", which in turn originates from the word "nous" (from νόος, νοῦς, perception, understanding, mind). A rough equivalent in English would be "something that is thought", or "the object of an act of thought". The concept in pre-Kantian philosophy[edit] Platonic Ideas and Forms are noumena, and phenomena are things displaying themselves to the senses. [...] that noumena and the noumenal world are objects of the highest knowledge, truths, and values is Plato's principal legacy to philosophy. Kant's usage[edit] Overview[edit] By Kant's account, when we employ a concept to describe or categorize noumena (the objects of inquiry, investigation or analysis of the workings of the world), we are in fact employing a way of describing or categorizing phenomena (the observable manifestations of those objects of inquiry, investigation or analysis).