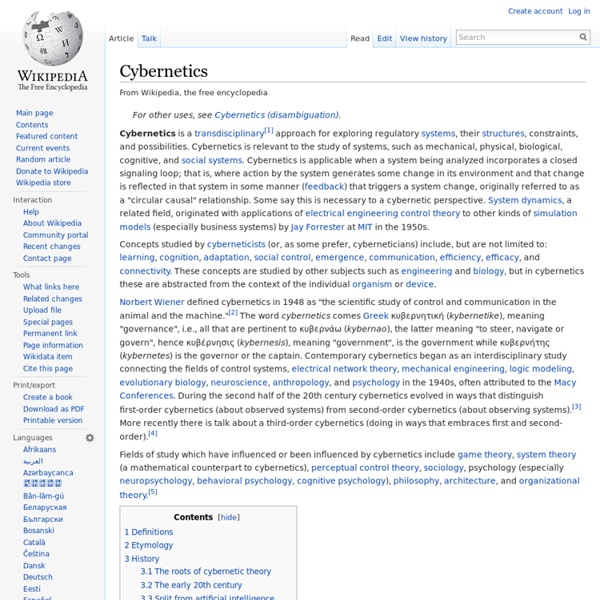 Cybernetics is a transdisciplinary[1] approach for exploring regulatory systems, their structures, constraints, and possibilities. Cybernetics is relevant to the study of systems, such as mechanical, physical, biological, cognitive, and social systems. Cybernetics is applicable when a system being analyzed incorporates a closed signaling loop; that is, where action by the system generates some change in its environment and that change is reflected in that system in some manner (feedback) that triggers a system change, originally referred to as a "circular causal" relationship. Concepts studied by cyberneticists (or, as some prefer, cyberneticians) include, but are not limited to: learning, cognition, adaptation, social control, emergence, communication, efficiency, efficacy, and connectivity. Norbert Wiener defined cybernetics in 1948 as "the scientific study of control and communication in the animal and the machine Definitions[edit] Other notable definitions include: Etymology[edit] W. Related:  Mustafa İnan Tübitak kurucusu

Boolean algebra Boolean algebra was introduced by George Boole in his first book The Mathematical Analysis of Logic (1847), and set forth more fully in his An Investigation of the Laws of Thought (1854).[1] According to Huntington the term "Boolean algebra" was first suggested by Sheffer in 1913.[2] Boolean algebra has been fundamental in the development of digital electronics, and is provided for in all modern programming languages. It is also used in set theory and statistics.[3] History[edit] In the 1930s, while studying switching circuits, Claude Shannon observed that one could also apply the rules of Boole's algebra in this setting, and he introduced switching algebra as a way to analyze and design circuits by algebraic means in terms of logic gates. Values[edit] As with elementary algebra, the purely equational part of the theory may be developed without considering explicit values for the variables.[12] Operations[edit] Basic operations[edit] The basic operations of Boolean algebra are as follows. J.

Information theory Overview[edit] The main concepts of information theory can be grasped by considering the most widespread means of human communication: language. Two important aspects of a concise language are as follows: First, the most common words (e.g., "a", "the", "I") should be shorter than less common words (e.g., "roundabout", "generation", "mediocre"), so that sentences will not be too long. Such a tradeoff in word length is analogous to data compression and is the essential aspect of source coding. Second, if part of a sentence is unheard or misheard due to noise — e.g., a passing car — the listener should still be able to glean the meaning of the underlying message. Note that these concerns have nothing to do with the importance of messages. Information theory is generally considered to have been founded in 1948 by Claude Shannon in his seminal work, "A Mathematical Theory of Communication". Historical background[edit] With it came the ideas of Quantities of information[edit] Entropy[edit] . that

Ecology and Ideology Return to Left Curve no. 21 Table of Contents by Peter Laska Thirty years ago the philosophy of ecology did not exist, ecology itself was a little known science; and the radical environmental movement, spurred by revelations in books like Rachel Carson's Silent Spring, was just getting under way. Today the literature on ecological topics is enormous and the theoretical work devoted to the ecological idea and its implications is large and growing. My reason for noting the last two works has todo with the fact that the concept of ecology as a science is missing from the above three anthologies. As a science, ecology studies the interrelationships of living things in their abiotic environments. Subsequent developments have proven this perception correct. The result is a kind of dream sequence or collec- tive hallucination in which dogmatic skepticism comes back into fashion as a way of maintaining one's grip. Under the control of market imperatives conformism is self-enforcing.

Choose Your Best Way Lesson from IEEE’s TryComputing.org. Click HERE for PDF of full lesson from TryEngineering.org. Summary In this lesson on using mathematical modeling to solve real-world problems, middle and high school students work in teams to build a graph-theory model of their city’s map, then use it to find the best route to school, evaluate their solutions, and present their reflections to the class. Grade level: 7 -12 Time: Two 45-minute sessions Engineering connection Graph theory – the study of graphs – is a visual way to represent or model relationships between objects that is used computer science, engineering, and mathematics. Learning objectives After doing this activity, students should be able to: Understand and develop a mathematical modelApply mathematical modeling and graph theory to solve a problemUnderstand computer algorithmic thinkingWork in teams Learning Standards NCTM’s Principles and Standards for School Mathematics Geometry Standard: Measurement Standard: Problem Solving Standard: 1. 2.

Henri Poincaré French mathematician, physicist, engineer, and philosopher of science Jules Henri Poincaré (,[4] ;[5][6][7] French: [ɑ̃ʁi pwɛ̃kaʁe] ( listen);[8][9] 29 April 1854 – 17 July 1912) was a French mathematician, theoretical physicist, engineer, and philosopher of science. As a mathematician and physicist, he made many original fundamental contributions to pure and applied mathematics, mathematical physics, and celestial mechanics.[11] In his research on the three-body problem, Poincaré became the first person to discover a chaotic deterministic system which laid the foundations of modern chaos theory. Poincaré made clear the importance of paying attention to the invariance of laws of physics under different transformations, and was the first to present the Lorentz transformations in their modern symmetrical form. The Poincaré group used in physics and mathematics was named after him. Life[edit] Education[edit] First scientific achievements[edit] Career[edit] Students[edit] Death[edit] Work[edit]

Decision theory Normative and descriptive decision theory[edit] Since people usually do not behave in ways consistent with axiomatic rules, often their own, leading to violations of optimality, there is a related area of study, called a positive or descriptive discipline, attempting to describe what people will actually do. Since the normative, optimal decision often creates hypotheses for testing against actual behaviour, the two fields are closely linked. Furthermore it is possible to relax the assumptions of perfect information, rationality and so forth in various ways, and produce a series of different prescriptions or predictions about behaviour, allowing for further tests of the kind of decision-making that occurs in practice. In recent decades, there has been increasing interest in what is sometimes called 'behavioral decision theory' and this has contributed to a re-evaluation of what rational decision-making requires.[1] What kinds of decisions need a theory? Choice under uncertainty[edit]

Différance Différance is a French term coined by Jacques Derrida, deliberately homophonous with the word "différence". Différance plays on the fact that the French word différer means both "to defer" and "to differ." Derrida first uses the term différance in his 1963 paper "Cogito et histoire de la folie".[1] The term différance then played a key role in Derrida's engagement with the philosophy of Edmund Husserl in Speech and Phenomena. The term was then elaborated in various other works, notably in his essay "Différance" and in various interviews collected in Positions.[2] The 〈a〉 of différance is a deliberate misspelling of différence, though the two are pronounced identically (IPA: [difeʁɑ̃s]). Différance – between structure and genesis[edit] Saussure is considered one of the fathers of structuralism when he explained that terms get their meaning in reciprocal determination with other terms inside language: In language there are only differences. Illustration of différance[edit]

Teacher Resources If you have used a word processor today, moved your mouse on your laptop, dragged an object around on your smartphone, or highlighted a section of text on your tablet, you can thank Jim Dammann. In 1961 during his second year at IBM and just one year after completing his PhD, Jim created the concept of what today we all take for granted -- the cursor. This idea he documented in utilizing the cursor within word processing operations. After retiring from IBM, Jim went on to inspire future generations of software engineers at Florida Atlantic University.