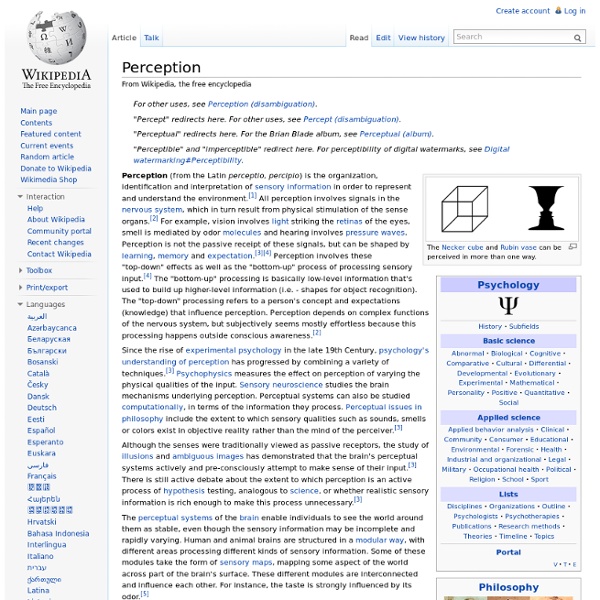 Since the rise of experimental psychology in the 19th Century, psychology's understanding of perception has progressed by combining a variety of techniques.[3] Psychophysics quantitatively describes the relationships between the physical qualities of the sensory input and perception.[5] Sensory neuroscience studies the brain mechanisms underlying perception. Perceptual systems can also be studied computationally, in terms of the information they process. Perceptual issues in philosophy include the extent to which sensory qualities such as sound, smell or color exist in objective reality rather than in the mind of the perceiver.[3] The perceptual systems of the brain enable individuals to see the world around them as stable, even though the sensory information is typically incomplete and rapidly varying. Human and animal brains are structured in a modular way, with different areas processing different kinds of sensory information. Process and terminology[edit] Perception and reality[edit]

Related:  PSYCHOLOGY • The problems with philosophy

Who Are You? (And What do You Think of Me?) The New Hire: What Do I Need to Know About This Job Candidate—and How Can I Find It Out? Every Sunday, America's corporate titans share their hiring strategies with . "I have a very good antenna about people," Starbucks founder Howard Schultz told the "Corner Office" column. "First off, I want to know what you're reading and then I'll ask you why.

FreeTube - Watch TV Online for Free with 100s of Live Internet C Free Website and Blog Hosting P4O Hosting is 100% Free, which means you can start and experiment with site creation, advanced dynamic programming, marketing, and other webmaster skills all in the comfortable and secure environment of your own personal hosting space. Unlike other free hosts, P4O.net offers features and services that rival paid hosting, including htaccess, script installers, webmail and addon domains to name a few. The Top 10 Psychology Studies of 2010 The end of 2010 fast approaches, and I'm thrilled to have been asked by the editors of Psychology Today to write about the Top 10 psychology studies of the year. I've focused on studies that I personally feel stand out, not only as examples of great science, but even more importantly, as examples of how the science of psychology can improve our lives. Each study has a clear "take home" message, offering the reader an insight or a simple strategy they can use to reach their goals , strengthen their relationships, make better decisions, or become happier. If you extract the wisdom from these ten studies and apply them in your own life, 2011 just might be a very good year.

Plug Energy Drains With These Magic Words In learning to manage my energy better, I have stumbled upon some magic words. These words are just as effective for extroverts as introverts , but introverts--with our deep listening habits, our hyperawareness, our busy, busy minds--may need them more. Say these words silently in your head when you feel yourself being sucked into a vortex of other people's demands and expectations. The two versions apply to a variety of situations and nuances. The magic words are:

Two-factor models of personality Beginnings[edit] The Roman physician Galen mapped the four temperaments (sanguine, phlegmatic, choleric and melancholic) to a matrix of hot/cold and dry/wet, taken from the four classical elements.[1] Two of these temperaments, sanguine and choleric, shared a common trait: quickness of response (corresponding to "heat"), while the melancholic and phlegmatic shared the opposite, a longer response (coldness). The melancholic and choleric, however, shared a sustained response (dryness), and the sanguine and phlegmatic shared a short-lived response (wetness).

Implicit memory Evidence and current research[edit] Advanced studies of implicit memory began only a few decades ago. Many of these studies focus on the effect of implicit memory known as priming.[1] Several studies have been performed that confirm the existence of a separate entity which is implicit memory. In one such experiment, participants were asked to listen to several songs and decide if they were familiar with the song or not. Half of the participants were presented with familiar American folk songs and the other half were presented with songs made using the tunes of the same songs from group 1 but mixed with new lyrics. William Schutz William Schutz (December 19, 1925 – November 9, 2002) was an American psychologist.[1][2] In 1958, Schutz introduced a theory of interpersonal relations he called Fundamental Interpersonal Relations Orientation (FIRO). According to the theory three dimensions of interpersonal relations were deemed to be necessary and sufficient to explain most human interaction: Inclusion, Control and Affection. These dimensions have been used to assess group dynamics. Schutz also created FIRO-B, a measurement instrument with scales that assess the behavioral aspects of the three dimensions. His advancement of FIRO Theory beyond the FIRO-B tool was most obvious in the change of the "Affection" scale to the "Openness" scale in the "FIRO Element-B".

The New Frontier in Democratic Theory and Practice: Organizational Forms that Simultaneously Optimize Autonomy & Community Returning to the Jungians, we find that at the forefront of Jungian psychological theory is the creation of a feminine ego based on the devalued functions of NF. Jungian analyst Laurie Schapira heralds the advent of a post-patriarchal "feminine" ego that is "grounded in the emotional [F], imaginal [N] matrix of the Self."72 -page 57-

Forer effect A related and more general phenomenon is that of subjective validation.[1] Subjective validation occurs when two unrelated or even random events are perceived to be related because a belief, expectation, or hypothesis demands a relationship. Thus people seek a correspondence between their perception of their personality and the contents of a horoscope. Forer's demonstration[edit] On average, the students rated its accuracy as 4.26 on a scale of 0 (very poor) to 5 (excellent). Only after the ratings were turned in was it revealed that each student had received an identical sketch assembled by Forer from a newsstand astrology book.[2] The sketch contains statements that are vague and general enough to most people. In another study examining the Forer effect, students took the MMPI personality assessment and researchers evaluated their responses.