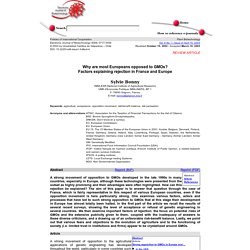 A strong movement of opposition to GMOs developed in the late 1990s in many countries, especially in Europe, although these technologies were presented from the outset as highly promising and their advantages were often highlighted. How can this rejection be explained? The aim of this paper is to answer that question through the case of France, which is fairly representative in this respect of various European countries, even if the opposition movement is here particularly strong. One examines various factors, actors and processes that have led to such strong opposition to GMOs that at this stage their development in Europe has almost totally been halted.

In the USA Many risks or negative effects are suspected in a very wide field. CORPORATE EUROPE OBSERVATORY 05/02/14 Biotech lobby shuns consumers at “GMO consumer benefit” event. The event – titled “Healthy Food - the untold story of GM crops” – was held in the Renaissance Hotel, conveniently located just around the corner from the European Parliament.(1) The organisers had kept remarkably quiet about an event that promised to demonstrate once and for all the benefits agricultural genetic engineering had brought humanity so far. 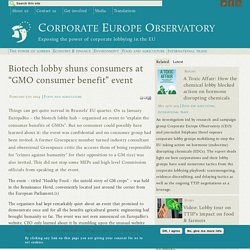 The event was not even announced on EuropaBio's website. CEO only learned about it by stumbling upon the unusual website www.allowgoldenricenow.org (link is external), run by industry consultant Patrick Moore whose main occupation since 1986 seems to be 'former early member of Greenpeace'. On his website, Moore accuses Greenpeace of literally being responsible for the death of eight million children as a result of their criticism of the Golden Rice project. EuropaBio is nevertheless saying that it is “stepping up" (link is external) its engagement with the European public to explain alleged consumer benefits of GM crops. 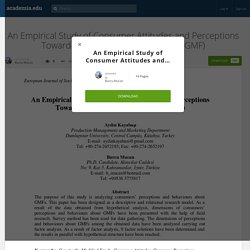 Consumer Attitudes Attitude is defined as positive or negative behaviour potential of individuals learned about an object. The object should be broadly interpreted as specific consumptions such as product, product category, ownerships, use of products, reasons, subjects, people, advertisement, Internet, electronic markets, prices, retailers, events and news. Attitudes are the primary issues in terms of marketing men since they are one of the basic factors affecting the final decision of consumers. Ğ lu and Özgen, 2010:91) . : Attitudes regarding GMFs affect eagerness to buy 2.3. Perception is defined as a process in which people try to understand their surroundings through the sense organs. . : Perceptions regarding GMFs affect eagerness to buy. Paper prepared for presentation at the Xth EAAE Congress ‘Exploring Diversity in the European Agri -Food System’, Zaragoza (Spain), 28-31 August 2002 Comparing Consumer Attitudes towards Genetically Modified Food in Europe.

GM CROPS & FOOD - JULY/DEC 2013 - The use and value of polling to determine public opinion on GMOs in Europe. PLOS 14/05/15 Revisiting GMOs: Are There Differences in European Consumers’ Acceptance and Valuation for Cisgenically vs Transgenically Bred Rice? Abstract Both cisgenesis and transgenesis are plant breeding techniques that can be used to introduce new genes into plant genomes. 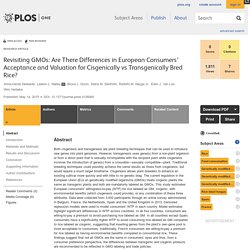 However, transgenesis uses gene(s) from a non-plant organism or from a donor plant that is sexually incompatible with the recipient plant while cisgenesis involves the introduction of gene(s) from a crossable—sexually compatible—plant. Traditional breeding techniques could possibly achieve the same results as those from cisgenesis, but would require a much larger timeframe.