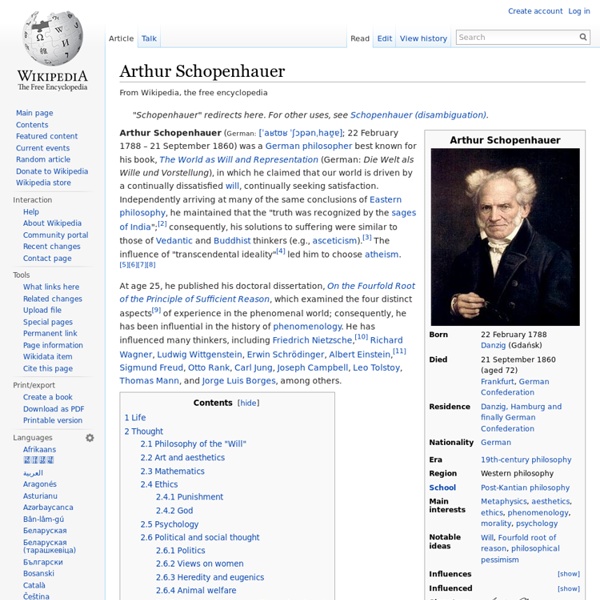 Life[edit] Schopenhauer's birthplace house, ul. Św. Ducha (formerly Heiligegeistgasse) In 1814, Schopenhauer began his seminal work The World as Will and Representation (Die Welt als Wille und Vorstellung). He finished it in 1818 and published it the following year. While in Berlin, Schopenhauer was named as a defendant in a lawsuit initiated by a woman named Caroline Marquet.[18] She asked for damages, alleging that Schopenhauer had pushed her. In 1821, he fell in love with nineteen-year old opera singer, Caroline Richter (called Medon), and had a relationship with her for several years. Schopenhauer had a notably strained relationship with his mother Johanna Schopenhauer. Grave at Frankfurt Hauptfriedhof Schopenhauer had a robust constitution, but in 1860 his health began to deteriorate. Thought[edit] Philosophy of the "Will"[edit] Schopenhauer in 1815, second of the critical five years of the initial composition of Die Welt als Wille und Vorstellung Art and aesthetics[edit] Ethics[edit]

Noumenon Etymology[edit] The Greek word noumenon (νοούμενoν), plural noumena (νοούμενα), is the middle-passive present participle of νοεῖν (noein), "I think, I mean", which in turn originates from the word "nous" (from νόος, νοῦς, perception, understanding, mind). A rough equivalent in English would be "something that is thought", or "the object of an act of thought". The concept in pre-Kantian philosophy[edit] Platonic Ideas and Forms are noumena, and phenomena are things displaying themselves to the senses. [...] that noumena and the noumenal world are objects of the highest knowledge, truths, and values is Plato's principal legacy to philosophy.—The Oxford Companion to Philosophy[3] Kant's usage[edit] Overview[edit] According to Kant, objects of which we are sensibly cognizant are merely representations of unknown somethings—what Kant refers to as the transcendental object—as interpreted through the a priori or categories of the understanding. Noumenon and the thing-in-itself[edit] See also[edit]

la jeunesse Søren Kierkegaard Søren Aabye Kierkegaard (/ˈsɔrən ˈkɪərkəɡɑrd/ or /ˈkɪərkəɡɔr/; Danish: [ˈsɶːɐn ˈkiɐ̯ɡəɡɒːˀ] ( )) (5 May 1813 – 11 November 1855) was a Danish philosopher, theologian, poet, social critic, and religious author who is widely considered to be the first existentialist philosopher.[5] He wrote critical texts on organized religion, Christendom, morality, ethics, psychology and philosophy of religion, displaying a fondness for metaphor, irony and parables. Much of his philosophical work deals with the issues of how one lives as a "single individual", giving priority to concrete human reality over abstract thinking, and highlighting the importance of personal choice and commitment.[6] He was a fierce critic of idealist intellectuals and philosophers of his time, such as Swedenborg,[7] Hegel, Goethe, Fichte, Schelling, Schlegel, and Hans Christian Andersen. Early years (1813–1836)[edit] Kierkegaard in a coffee-house, an oil sketch by Christian Olavius, 1843 Journals[edit]

Phenomenology (psychology) The quality or nature of a given experience is often referred to by the term qualia, whose archetypical exemplar is "redness". For example, we might ask, "Is my experience of redness the same as yours?" While it is difficult to answer such a question in any concrete way, the concept of intersubjectivity is often used as a mechanism for understanding how it is that humans are able to empathise with one another's experiences, and indeed to engage in meaningful communication about them. The philosophical psychology prevalent before the end of the 19th century relied heavily on introspection. In the early 1970s, Amedeo Giorgi applied phenomenological theory to his development of the Descriptive Phenomenological Method in Psychology in order to overcome certain problems he perceived, from his work in psychophysics, with approaching subjective phenomena from the traditional hypothetical-deductive framework of the natural sciences. Philosophers have long confronted the problem of "qualia".

plafond John Stuart Mill John Stuart Mill, FRSE (20 May 1806 – 8 May 1873) was an English philosopher, political economist and civil servant. He was an influential contributor to social theory, political theory and political economy. He has been called "the most influential English-speaking philosopher of the nineteenth century".[3] Mill's conception of liberty justified the freedom of the individual in opposition to unlimited state control.[4] He was a proponent of utilitarianism, an ethical theory developed by Jeremy Bentham. Hoping to remedy the problems found in an inductive approach to science, such as confirmation bias, he clearly set forth the premises of falsifiability as the key component in the scientific method.[5] Mill was also a Member of Parliament and an important figure in liberal political philosophy. Biography[edit] John Stuart Mill was born on Rodney Street in the Pentonville area of London, the eldest son of the Scottish philosopher, historian and economist James Mill, and Harriet Burrow.

Intuition A phrenological mapping[1] of the brain – phrenology was among the first attempts to correlate mental functions with specific parts of the brain Intuition, a phenomenon of the mind, describes the ability to acquire knowledge without inference or the use of reason.[2] The word intuition comes from Latin verb intueri translated as consider or from late middle English word intuit to contemplate.[3] Intuition is often interpreted with varied meaning from intuition being glimpses of greater knowledge[4] to only a function of mind; however, processes by which and why they happen typically remain mostly unknown to the thinker, as opposed to the view of rational thinking. Intuition has been subject of discussion from ancient philosophy to modern psychology, also a topic of interest in various religions and esoteric domains, as well as a common subject of writings.[5] and is often misunderstood and misinterpreted as instinct, truth, belief, meaning and other subjects. Hinduism[edit] Buddhism[edit]