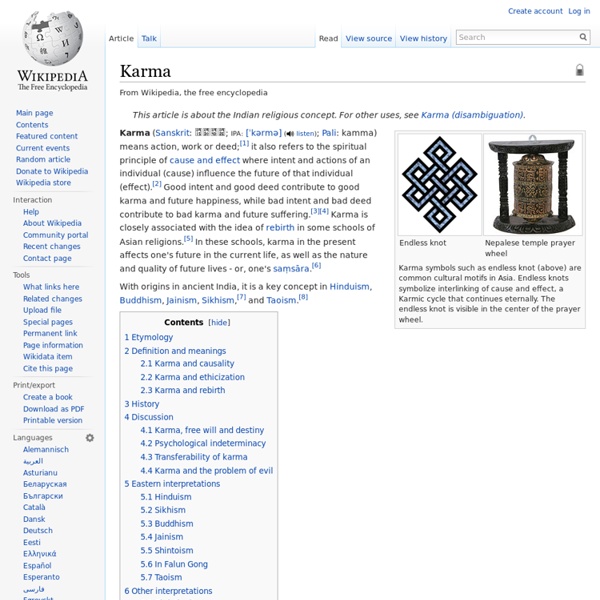 Endless knot Nepalese temple prayer wheel Karma symbols such as endless knot (above) are common cultural motifs in Asia. Karma (Sanskrit: कर्म; IPA: [ˈkərmə]; Pali: kamma) means action, work or deed;[1] it also refers to the spiritual principle of cause and effect where intent and actions of an individual (cause) influence the future of that individual (effect).[2] Good intent and good deed contribute to good karma and future happiness, while bad intent and bad deed contribute to bad karma and future suffering.[3][4] Karma is closely associated with the idea of rebirth in some schools of Asian religions.[5] In these schools, karma in the present affects one's future in the current life, as well as the nature and quality of future lives - or, one's saṃsāra.[6] With origins in ancient India, it is a key concept in Hinduism, Buddhism, Jainism, Sikhism,[7] and Taoism.[8] Etymology Karma is related to verbal proto-Indo-European root *kwer- "to make, form".[13] Definition and meanings History Taoism

Happening A happening is a performance, event or situation meant to be considered art, usually as performance art. Happenings occur anywhere and are often multi-disciplinary, with a nonlinear narrative and the active participation of the audience. Key elements of happenings are planned, and artists sometimes keep room for improvisation. This new media art aspect to happenings eliminates the boundary between the artwork and its viewer. In the late 1960s, perhaps due to the depiction in films of hippie culture, the term was much less specifically used to mean any gathering of interest from a pool hall meetup or a jamming of a few young people to a beer blast or fancy formal party. History[edit] Origins[edit] Happenings are difficult to describe, in part because each one is unique and completely different from one another. Happenings can be a form of participatory new media art, emphasizing an interaction between the performer and the audience. Difference from plays[edit] Around the world[edit]

How New Age practitioners might define good karma and bad karma - by Steve Marshall What is karma? Is there good and bad karma? Is good karma good, and bad karma bad, or can bad karma sometimes be good, and can good karma, sometimes be bad. Is the right idea to only make good karma, or to not make any karma at all? Love is the only energy that carries no karma, good or bad, it is only ever just itself, love. This means that God himself has no karma, as he is composed only of the energy of love. Bad karma is essentially distancing yourself away from love, and good karma is coming closer to love. Love contains all energies. Good karma creates the higher energies of love, allowing them to vibrate within you, and bad karma is essentially only about fear. Bad karma comes about from how you treat others, from your fear, or more because of your holding onto this fear, but it can even be created by how you treat yourself. All connections to others, to yourself and to God create karma. Karma is time based because it takes place in time, and it needs time to resolve it.

Divinity Usages[edit] Divinity as a quality has two distinct usages: Divine force or power - powers or forces that are universal, or transcend human capacitiesDivinity applied to mortals - qualities of individuals who are considered to have some special access or relationship to the divine. There are three distinct usages of divinity and divine in religious discourse: Entity[edit] In monotheistic faiths, the word divinity is often used to refer to the singular God central to that faith. The terms divinity and divine — uncapitalized, and lacking the definite article — are sometimes used as to denote 'god(s)[4] or certain other beings and entities which fall short of godhood but lie outside the human realm. Divine force or power[edit] As previously noted, divinities are closely related to the transcendent force(s) or power(s) credited to them,[5] so much so that in some cases the powers or forces may themselves be invoked independently. Mortals[edit] Christianity[edit] Acts 17:29 Romans 1:20 2 Peter 1:3

Good Karma Bad Karma : Definition of Karma This article may be freely downloaded and reproduced in electronic and/or print format. Where reproduced it must be reproduced in its entirety and include an acknowledgement and a link to new-age-spirituality.com Karma is one of the West's best known Eastern Mystical concepts, even featuring in popular songs by John Lennon (Instant Karma), David Bowie (Karma Man), and Culture Club (Karma Chameleon) among others. Understanding your karma can make the same difference to your life as swimming with or against the tide. Get it right and good things flow naturally. Some years ago the then England football manager Glenn Hoddle was fired for an ill-considered remark that disabled people were paying for the sins of past lives. Definition of Karma Karma is simply the process of cause and effect. whatsoever a man soweth, that shall he also reap St Paul, Galatians 6-7 Karma is not about punishment. Working with Karma Karma influences our current life in two ways. Karma and Luck Comment on this item

Hope Hope is an optimistic attitude of mind based on an expectation of positive outcomes related to events and circumstances in one's life or the world at large.[1] As a verb, its definitions include: "expect with confidence" and "to cherish a desire with anticipation".[2] In psychology[edit] Dr. Barbara L. Fredrickson argues that hope comes into its own when crisis looms, opening us to new creative possibilities.[4] Frederickson argues that with great need comes an unusually wide range of ideas, as well as such positive emotions as happiness and joy, courage, and empowerment, drawn from four different areas of one’s self: from a cognitive, psychological, social, or physical perspective.[5] Hopeful people are "like the little engine that could, [because] they keep telling themselves "I think I can, I think I can".[6] Such positive thinking bears fruit when based on a realistic sense of optimism, not on a naive "false hope".[7] The psychologist C.R. D. In healthcare[edit] Background[edit]

Karma in Buddhism Karma (Sanskrit, also karman, Pāli: kamma) is a Sanskrit term that literally means "action" or "doing". Within the Buddhist tradition, the term karma is used in two senses: Within Buddhism, the theory of karmic action and result (karmaphala) is identified as part of the broader doctrine of dependent origination (pratityasamutpada), which states that all phenomena arise as the result of multiple causes and conditions. The theory of karmic action and result is a specific instance of this broader doctrine that applies to specifically to sentient beings–when there is a conscious intention (cetanā) behind an action, then the action is karma and the corresponding results are karmic results. In the Buddhist view, karmic results are not considered to be a "judgement" imposed by a God or other all-powerful being; rather, these results are considered to be the outcome of a natural process. Buddhism is a nontheistic philosophy. Meanings of karma[edit] Centrality to Buddhist thought[edit]

Intuition A phrenological mapping[1] of the brain – phrenology was among the first attempts to correlate mental functions with specific parts of the brain Intuition, a phenomenon of the mind, describes the ability to acquire knowledge without inference or the use of reason.[2] The word intuition comes from Latin verb intueri translated as consider or from late middle English word intuit to contemplate.[3] Intuition is often interpreted with varied meaning from intuition being glimpses of greater knowledge[4] to only a function of mind; however, processes by which and why they happen typically remain mostly unknown to the thinker, as opposed to the view of rational thinking. Intuition has been subject of discussion from ancient philosophy to modern psychology, also a topic of interest in various religions and esoteric domains, as well as a common subject of writings.[5] and is often misunderstood and misinterpreted as instinct, truth, belief, meaning and other subjects. Hinduism[edit] Buddhism[edit]

Mieses Karma All players died in the beginning of the game and are reborn - due to their bad karma - as an ant. The goal of the game is to become a man again. Therefore, the players have to collect karma by building their lifelines and donate cards for the lifelines of other players. Information about the Novel "Bad Karma" from David Safier: This debut novel by David Safier follows the trials and tribulations of Kim Karlsen, a television personality whose career obsession brings her some serious cosmic repercussions. Phenomenology (psychology) The quality or nature of a given experience is often referred to by the term qualia, whose archetypical exemplar is "redness". For example, we might ask, "Is my experience of redness the same as yours?" While it is difficult to answer such a question in any concrete way, the concept of intersubjectivity is often used as a mechanism for understanding how it is that humans are able to empathise with one another's experiences, and indeed to engage in meaningful communication about them. The phenomenological formulation of Being-in-the-World, where person and world are mutually constitutive, is central here. The philosophical psychology prevalent before the end of the 19th century relied heavily on introspection. The speculations concerning the mind based on those observations were criticized by the pioneering advocates of a more scientific approach to psychology, such as William James and the behaviorists Edward Thorndike, Clark Hull, John B. Jump up ^ Hardy Leahy, Thomas (2001).