PHILOSOPHY - Metaphysics: Paradoxes of Perception. Honda CRV. Daniel Tammet: Different ways of knowing. Is Seeing Believing - BBC Documentary. Can You Trust Your Ears? The Science of Why No One Agrees on the Color of This Dress. Not since Monica Lewinsky was a White House intern has one blue dress been the source of so much consternation. 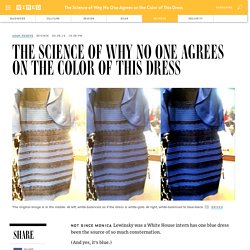 (And yes, it’s blue.) The fact that a single image could polarize the entire Internet into two aggressive camps is, let’s face it, just another Thursday. But for the past half-day, people across social media have been arguing about whether a picture depicts a perfectly nice bodycon dress as blue with black lace fringe or white with gold lace fringe. And neither side will budge.

This fight is about more than just social media—it’s about primal biology and the way human eyes and brains have evolved to see color in a sunlit world. Light enters the eye through the lens—different wavelengths corresponding to different colors. Usually that system works just fine. We asked our ace photo and design team to do a little work with the image in Photoshop, to uncover the actual red-green-blue composition of a few pixels. Click to Open Overlay Gallery So…kind of orange-y? “Right,” says Conway. 10 Best optical illusions. How your eyes trick your mind. While we know that different areas of the brain deal with colour, form, motion and texture, how the brain encodes and combines this information into a coherent picture remains poorly understood. 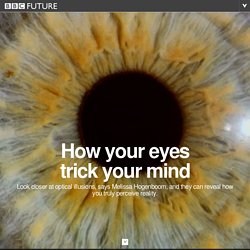 What’s more, new illusions, and variants on old ones are appearing all the time. Vision researchers hold an annual competition, now in its 10th year, to find the best new illusions. One of the judges is visual neuroscientist Susana Martinez-Conde from the Barrow Neurological Institute in Arizona. The contest has a selfish motivation of sorts, she says: she wants to keep an eye out for interesting new illusions that will help her to study the brain. 2014’s winning entry is a novel take on the 19th Century Ebbinghaus Illusion. “Many of the newer illusions are takes on the classical versions as the technology has now opened the doors to revisit them," she says. Gettysburg: What did it smell like? Vicksburg: What did it taste like? A sensory history of the Civil War. Photo by Timothy H. 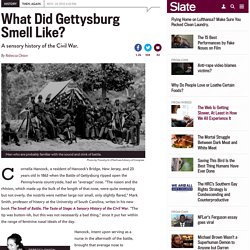 O'Sullivan/Library of Congress Cornelia Hancock, a resident of Hancock’s Bridge, New Jersey, and 23 years old in 1863 when the Battle of Gettysburg ripped open the Pennsylvania countryside, had an “average” nose. “The nason and the rhinion, which made up the bulk of the length of that nose, were quite sweeping but not overly, the nostrils were neither large nor small, only slightly flared,” Mark Smith, professor of history at the University of South Carolina, writes in his new book The Smell of Battle, The Taste of Siege: A Sensory History of the Civil War. “The tip was button-ish, but this was not necessarily a bad thing,” since it put her within the range of feminine nasal ideals of the day. Rebecca Onion, who runs Slate’s history blog The Vault, is a writer and academic living in Ohio. How reliable is eyewitness testimony? Scientists weigh in. The victim peers across the courtroom, points at a man sitting next to a defense lawyer, and confidently says, "That's him! 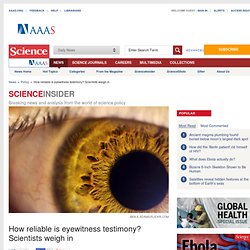 " Such moments have a powerful sway on jurors who decide the fate of thousands of people every day in criminal cases. But how reliable is eyewitness testimony? A new report concludes that the use of eyewitness accounts need tighter control, and among its recommendations is a call for a more scientific approach to how eyewitnesses identify suspects during the classic police lineup. For decades, researchers have been trying to nail down what influences eyewitness testimony and how much confidence to place in it. After a year of sifting through the scientific evidence, a committee of psychologists and criminologists organized by the U.S.

As Loftus puts it, "just because someone says something confidently doesn't mean it's true. " The procedures of a criminal investigation can even distort eyewitness recall. So why is NRC weighing in now?