Buddhism and the Brain & SEEDMAGAZINE.COM - StumbleUpon 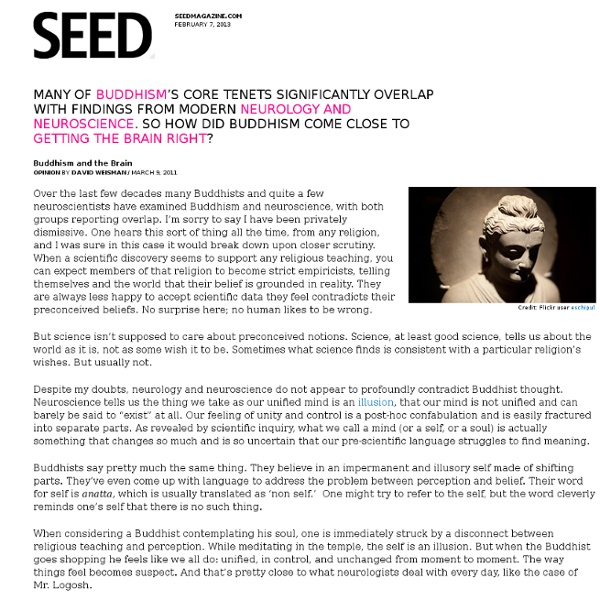 Credit: Flickr user eschipul Over the last few decades many Buddhists and quite a few neuroscientists have examined Buddhism and neuroscience, with both groups reporting overlap. I’m sorry to say I have been privately dismissive. One hears this sort of thing all the time, from any religion, and I was sure in this case it would break down upon closer scrutiny. When a scientific discovery seems to support any religious teaching, you can expect members of that religion to become strict empiricists, telling themselves and the world that their belief is grounded in reality. They are always less happy to accept scientific data they feel contradicts their preconceived beliefs. But science isn’t supposed to care about preconceived notions. Despite my doubts, neurology and neuroscience do not appear to profoundly contradict Buddhist thought. Buddhists say pretty much the same thing. Mr. Although I despaired, I comforted myself by looking at the overlying cortex. The next day Mr.

The Big Book of Yoga: The Yoga Family Treehouse (page 1 of 4) Yoga has been around for a long, long time. The earliest reliable evidence we have of Yoga being practiced in ancient India is a carving from the early Indus Valley settlement, Mohenjo-Daro, possibly dating back to 3300 BCE1. By way of comparison, Lao Tze, Socrates, and Buddha wouldn't be born until almost 3,000 years later. So in order to provide a truly comprehensive history of Yoga would entail the work of a lifetime (or lifetimes!). What follows instead is a brief timeline and "genealogy" of the major influences in Yoga going as far back as we have reliable documentation, which is a bit more than 2,000 years or so. (Much beyond that and we have to rely mostly on speculation based on archaeological evidence.)

Buddhism Facts - Interesting Facts on Buddhism - Buddhism Religion Fact This write up on Buddhism facts contains information on some interesting facts on Buddhism religion facts. Buddhism is the fourth largest religion of the world. Founded by Gautam Buddha, it is a path of spiritual development that helps a person in finding the true nature of life. John Conways Game of Life - StumbleUpon The Game The Game of Life is not your typical computer game. It is a 'cellular automaton', and was invented by Cambridge mathematician John Conway. This game became widely known when it was mentioned in an article published by Scientific American in 1970. It consists of a collection of cells which, based on a few mathematical rules, can live, die or multiply.

Sustainable Table Sustainable Agriculture - The Basics Sustainable agriculture provides healthy food for consumers while protecting the environment and human health, safeguarding animal welfare and supporting local communities. Questions to Ask s Introduction to Complex Systems - StumbleUpon by David Kirshbaum I. Introduction: Complex Systems Theory : Basic Definition II. Four Important Characteristics of Complexity: Ecocentric : A blog about food, water and energy This Week in Eco News - April 18, 2014 Did you know that NFL linebacker Will Witherspoon is also an organic beef producer? Or that it's possible to extract water from the air? Or fuel from seawater? See these stories, along with climate news and fun multimedia, in this week's Eco News. Our Heroes: Gordian Raacke of Renewable Energy Long Island