Amy Crowhurst who got pregnant at the age of 12 said she would be happy if her daughter became pregnant at the same age. Ms Crowhurst, now 22, said: “It’d be fun being a gran at 27.” Amy had Alfie, now nine, in 2003 and Destiny, now seven, four years later when she was 16. She added: “Having sex at 12 is fine if you feel ready and aren’t pressured. “If she (Destiny) had a baby at 12, I know she’d cope and I’d be happy for her. “Having kids young was the smartest thing I ever did. The former Thomas Bennett Community College school pupil lives in a three-bed council house in Crawley and claims benefits. Why this 'Shoreditchification' of London must stop. Gorilla's Pet : Koko Mourns Kitten's Death. Koko the "talking" gorilla whimpered with grief and "discussed" the death of her pet kitten, struck and killed by a car, for several days after getting the bad news, her teachers say.

The 13-year-old gorilla became famous after being taught American sign language by researchers at the Gorilla Foundation in Woodside, near Stanford University. The 12-year-old research project is said to be the world's longest continuing ape language study. Koko, whose favorite picture book stories include "The Three Little Kittens" and "Puss 'n' Boots," asked for a kitten for a Christmas present a year ago, researchers said. Wisdom of the Ancients.

Weirdness on TV. The Behavioral Sink. Cabinet and the author regret that a previous version of this article omitted its sources. 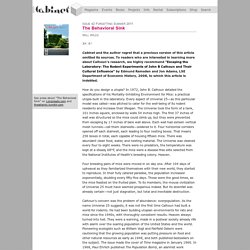 To readers who are interested in learning more about Calhoun's research, we highly recommend "Escaping the Laboratory: The Rodent Experiments of John B Calhoun and Their Cultural Influence" by Edmund Ramsden and Jon Adams, LSE Department of Economic History, 2008, to which this article is indebted. How do you design a utopia? In 1972, John B. Calhoun detailed the specifications of his Mortality-Inhibiting Environment for Mice: a practical utopia built in the laboratory. Every aspect of Universe 25—as this particular model was called—was pitched to cater for the well-being of its rodent residents and increase their lifespan. Death By Utopia. John B. 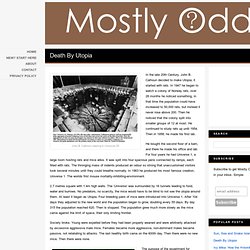 Calhoun relaxing in Universe 25 In the late 20th Century, John B. Calhoun decided to make Utopia; it started with rats. In 1947 he began to watch a colony of Norway rats, over 28 months he noticed something, in that time the population could have increased to 50,000 rats, but instead it never rose above 200. Then he noticed that the colony split into smaller groups of 12 at most. He bought the second floor of a barn, and there he made his office and lab. 2.7 metres square with 1.4m high walls. Society broke. Annoying Facebook Girl - you only live once sits at home watching jersey shore.

The Same Photograph At The Leaning Tower Of Pisa. Queen's diamond jubilee: a vapid family and a mirage of nationhood. What's to celebrate? The mighty royal jubilee bells will toll their way down the Thames on Sunday on a floating belfry leading a thousand boats, echoed by pealing church bells all down the riverside. 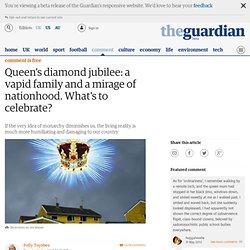 Who could miss the spectacle of a hundred tall ships serenaded with Handel's Water Music played by a floating orchestra? The more outrageously glorious the performance, the more preposterous its purpose. There at the heart, in the dead centre of all this pomp and circumstance, is the great emptiness, the nothingness, the Wizard of Oz in emperor's clothes. The louder the bells, the more gaping the grand vacuity. What are we celebrating? How close to religion it is, with all the same feudal imagery, God as Lord and sovereign, sovereign anointed by God, knelt before in a divine hierarchy of power ordained by laws too ineffable to explain. Every country needs its founding myths, its binding identity rooted in a valiant story that rarely stands up to historical scrutiny.

I have had enough of irony. The ultimate faux-pas is not laughing at someone's artfully told joke. 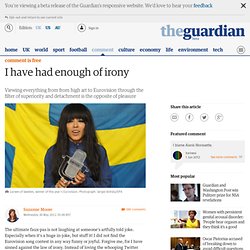 Especially when it's a huge in-joke, but stuff it! I did not find the Eurovision song contest in any way funny or joyful. Forgive me, for I have sinned against the law of irony. Instead of loving the whooping Twitter snark and the "witty" live blogging, I committed a veritable thought crime. Instead of thinking "This is so bad it's good", I thought, "This is so bad it's execrable": a futile exercise that people are trying desperately to make "fun". Elena Brower: Art of Attention: Remapping Our Minds. Love really is a state of equality consciousness: no speculation, no assumptions or opinions. 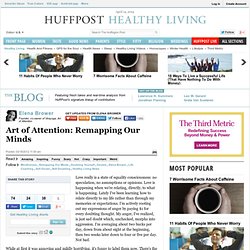 Susan Cain: The power of introverts. Do we really give introverts a hard time? 27 March 2012Last updated at 12:50 ET By Vanessa Barford BBC News Magazine. 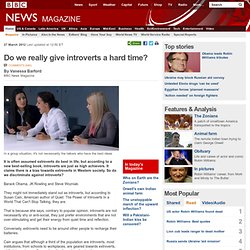